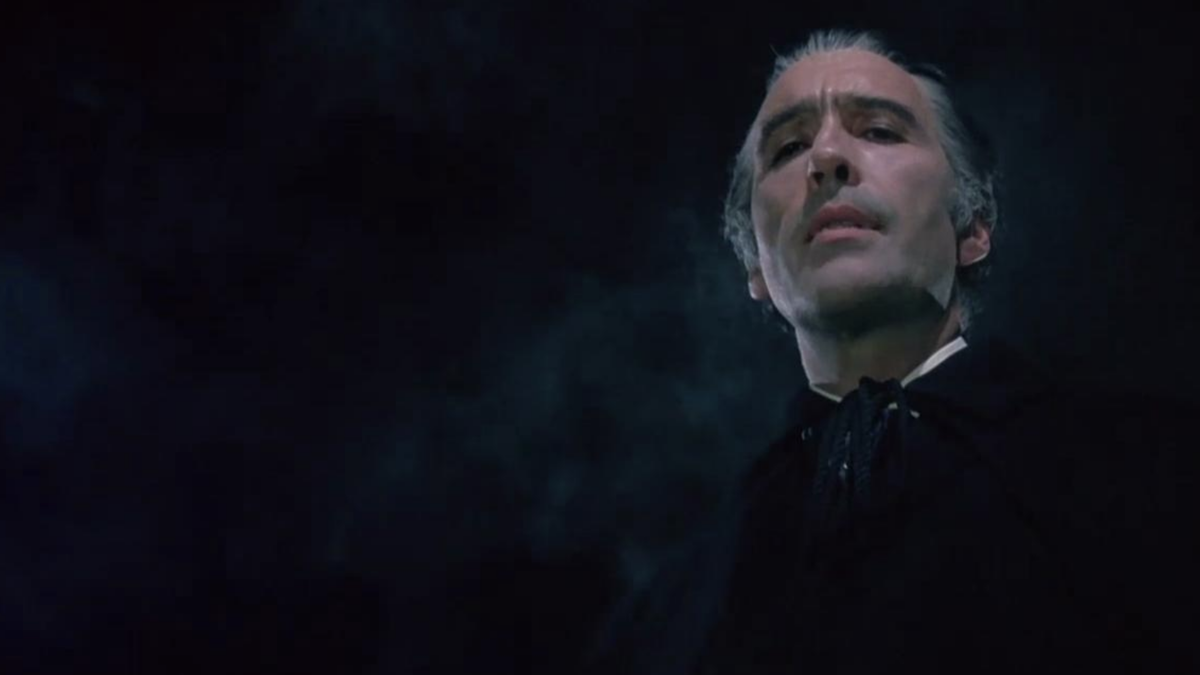 I was excited to see that Warner Archive has resumed releasing some of their Hammer Productions films. Warner had previously released a four disk collection of some Hammer films and with the release of Dracula A.D. 1972 and Rhe Satanic Rites of Dracula, they may be working their way toward a second box set. To be honest, I know very little about the Hammer horror films. Given the opportunity, I decided to check out Dracula A.D. 1972.

In 1872, Dracula (Christopher Lee) and Van Helsing (Peter Cushing) battle on top of a carriage in Hyde park. When the carriage crashes, Dracula is impaled on one of the wagon wheels. Van Helsing manages to break off the wheel which effectively turns it into a stake. As Dracula perishes, Van Helsing succumbs to his injuries. As Dracula turns to ash an enterprising traveler named Johnny (Christopher Neame) puts on Dracula’s ring and puts some of his ashes into a small glass vial. Cut to 1972 in London: the enterprising traveler has not aged since 1872 and has gotten in with a psychedelic group of misanthropes in Chelsea. His name is now Johnny Alucard. He invites all of the gang to meet him at a cemetery for a special ceremony. One of the members of the group, Jessica (Stephanie Beacham,) is actually Van Helsing’s great granddaughter. Jessica alarms her grandfather, Professor Lorrimer Van Helsing (Peter Cushing,) when he finds her reading a book on demonology. When she goes to meet her friends at the cemetery, Jessica is shocked to see her great grandfather’s grave on her way to the ceremony. At the ceremony Johnny begins a ritual after saying “Dig the music kids!” Using one of the girls named Laura, Johnny successfully performs a blood ritual which brings Dracula back to life. When Dracula sucks Laura dry, Scotland Yard finds the body the next day. Inspector Murray (Michael Cole) enlists the help of Professor Van Helsing when he sees that Jessica Van Helsing knew the corpse.

This movie is a fun and ridiculous horror film that would be pretty impossible to take seriously. The truth of the matter is that Dracula is not as effective and scary when placed in modern times. That said, the film has its moments. One of the best scenes has Peter Cushing’s Van Helsing throw a Bible into a coffin to keep a vampire from returning to his coffin. That was an inventive scene and it did a good job of working out a situation within the rules of a universe where vampires exist.

If the movie is hard to take seriously, it still has some good elements. First and foremost, it features Christopher Lee and Peter Cushing. Both actors were Shakespearean trained actors and birth had played their respective roles numerous times before this film. Cushing has played Van Helsing twice prior, and Lee had played Dracula seven times here this film. This film unfortunately underutilizes the two great actors, with Dracula in particular getting just a few moments of screen time. The film also looks pretty good thanks to some striking imagery from cinematographer Dick Bush. The leading lady in the film is also pretty easy on the eyes.

Overall, this film is going to appeal to folks that read the title and go,”hmm… Dracula is participating in the hippie culture of 1972? Sounds like fun.” If this doesn’t sound like your cup of tea, avoid it. If you are looking for a campy and ridiculous film, this will fit the bill.

While the film’s merits are up for debate, it is impossible to debate that Warner have done a tremendous job on the new transfer of the film. Due to the time in which it was filmed, the film is very colorful. Dick Bush’s cinematography in the film employs a lot of visually exciting colors, lens flares, and eventually some of the reddest blood put on celluloid. Warner have done a tremendous job on the restoration of the film with a new 2K scan from the original elements. It looks great.

Similar to the video treatment, Warner have done an excellent job of expanding the original mono recordings into a two-channel mix that sounds very good. This typically means that the dialogue will stay fairly flat but the music will sound pretty robust in the speakers. Occasionally I did feel like the music was overwhelming the dialogue track and making it hard to hear what was said, but this happened very infrequently in the track. I enjoyed the funky sounding compositions by Michael Vickers and the obviously Rolling Stones influenced songs by Stoneground that are featured at the beginning of the film.

Dracula A.D. 1972 is not a great movie. It’s a pretty bad idea, basically. That said, I was in the mood for this type of trash. If you are in the mood for something like this, Warner have done a great job on the technical specs. This movie is fun, entertaining, and poorly conceived. Fans will appreciate seeing it on Blu-ray, and the rest of the world will collectively shrug.