Down By Law: Criterion Collection (Blu-ray)

Zack (Tom Waits) is an unemployed disc jockey and Jack (John Lurie) is a small time pimp, but both have a common thread, they’re too laid back. In fact, when both found themselves framed for a serious crime, neither was able to muster the incentive to prove their innocence, clear their names, and retain their freedoms. So instead of simply proving they weren’t the criminals, both wind up in prison and of course, are forced to share the same cell. Although there is a strong hatred between them, it doesn’t even come close to the distaste they have for the third cellmate, who drives them both to the edge of sanity. This man is befuddled Italian tourist Roberto (Roberto Benigni), who has little grasp of the English language, which amuses his fellow prisoners at first, but soon becomes more of an annoyance. But they have to not only tolerate him, but also humor him at times, since he happens to know how the trio can escape…

I’d say Down by Law is one of the more eclectic additions to The Criterion Collection, but even so, it more than deserves that spine number. Jim Jarmusch’s offbeat movie combines elements of film noir, deadpan comedy, and prison picture, creating a most unique and unconventional, yet highly engaging project. As with Jarmusch’s other films like Stranger than Paradise and Mystery Train, Down by Law won’t click with everyone, as the movie has a strange texture and takes a certain taste to appreciate. The pace is sometimes slow, but never too much so, as the time is well managed in most sequences. In addition to some wonderful writing, Down by Law features some excellent black & white visuals (thanks to director of photography Robby Muller), some terrific performances, and a great sense of humor. Jarmusch takes a good look at the human condition, but never forgets to inject doses of almost lethal humor, so unlike a lot of movies that attempt this kind of reflection, Down by Law is never dull. I give this movie a high recommendation to fans of offbeat cinema.

He was a virtual unknown when this movie was released, but in the years since, Roberto Benigni has become quite well-known. That’s kind of misleading, as Benigni took home several awards for his movie Life is Beautiful, though to mainstream American audiences, he remains somewhat unknown. I found his performance in Life is Beautiful to not only be undeserving of an Oscar, but also quite weak, considering the material involved. But in Down by Law, Benigni shows he can deliver in front of the cameras and puts on a terrific show, creating so many laughs, your sides might be in pain before the end credits roll. In most of Jarmusch’s movies, we’re given one character to break the tension and add humor, and in Down by Law, Benigni does that and more, quite a great all around effort. Other films with Benigni include Life is Beautiful, The Monster, Son of the Pink Panther, The Little Devil, and Personal Effects. The cast also includes Tom Waits (Mystery Men, Bram Stoker’s Dracula), John Lurie (Stranger than Paradise, New Rose Hotel), and Ellen Barkin (The Big Easy, Sea of Love).

Criterion continues to take pride in their titles and this new Blu-ray edition was supervised by Jim Jarmusch.  The 1.78:1 AVC HD image is crisp and clean throughout with the stunning black and white visuals taking center stage. I found the nighttime scenes to look crisp and sharp with contrast and black levels being spot on.  Detail has been improved a bit from the previous DVD version (released about a decade ago).  The film seems to have the right balance between visual clarity and that “realistic” feel that give it a very unique look.  While not heads and tails above the previous DVD, there are some subtle improvements, though the way this looks overall is most pleasing indeed.

There are a pair of audio tracks on this Blu-ray, an LPCM 1.0 track and a French Dolby Digital track.  This was the case with the DVD as well (the English version was mono as opposed to LPCM) and I can’t imagine this movie sounding any better than it does here.  That’s a bit misleading, however, as it is one channel and as such the range is limited.  Still, vocals sound crisp and clear free of any sort of distortion. There’s also an isolated music track included.

The supplements are identical to Criterion’s DVD of the movie and as such we get the theatrical trailer, as well as thoughts & reflections by director Jim Jarmusch. While not a traditional audio commentary track, Jarmusch addresses all sorts of topics in this audio session, from a general overview on this release to music in films, to the shoot, to his approach to direction, and believe me, he covers a ton of material in this collection of insightful comments.

The rest of the extras fall on the second disc, including quite a large assortment of interviews with cast & crew members. A new interview with director of photography Robby Muller is found here, as well as the 1986 Cannes Film Festival press conference, which features Jarmusch and stars John Lurie, Roberto Benigni, and Nicoletta Braschi. But that’s not all, as an additional interview with Lurie is next, complete with optional audio comments, plus a nice Q&A session with Jarmusch, which is not to be missed. A collection of phone calls from Jarmusch to stars Lurie, Benigni, and Tom Waits adds a lot to this release, if just for the unique angle of hearing real calls. This set also includes a music video by Waits, some outtakes, production photos, and a selection of location stills. 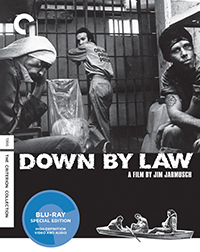