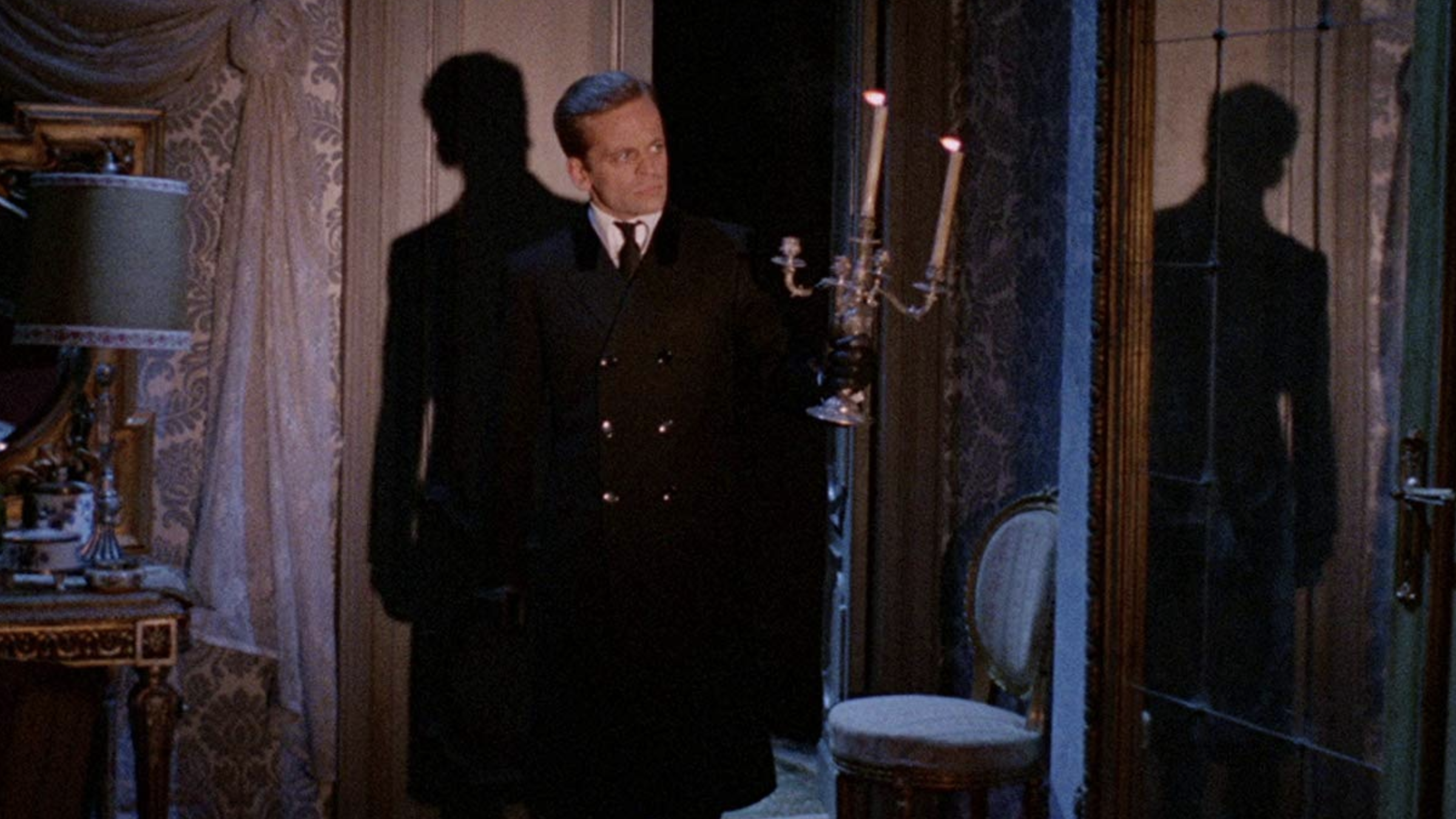 The proto-giallo film, The Iguana with the Tongue of Fire, by director Ricardo Freda was only a decent Italian thriller, I was excited to see that Arrow was releasing another Riccardo Freda film called Double Face. This film was of extra interest to me because it stars the wonderful character actor Klaus Kinski. I had first seen Kinski in Herzog’s delightfully offbeat film Fitzcarraldo, and then numerous times since including his fantastic performance in The Great Silence. This film finds Kinski in a much more restrained moped and playing it straight. This will intrigue fans of the eccentric actor if their sensibilities align with mine. I sat down last night and watched the film.

The film begins with a train crashing into a car in front of a police car which has John Alexander in the front seat. This will not be explained until much later in the film. The film cuts backwards. In London, John Alexander (Klaus Kinski) discovers that his wife Helen is having an affair with a woman named Liz. Helen requests to take a vacation so she may have some time with her lover. Helen assures Liz that it is over between herself and John. Helen also owns 90% of the business that employs John. The night before her trip, somebody plants a bomb in her sports car and sets it to go off while she drives to her destination. At the last moment Helen informs John and her father that she intends to drive alone. After departing, her sports car flies off the road and explodes. John is urged to take a vacation after the funeral. He travels to St. Tropez. This vacation so soon after Helen’s demise arouses the suspicions of two officers. They visit John upon his return to the company which he now owns. John explains that he visited the places that he had visited with his deceased wife. Arriving back home, John finds a nude stranger taking a shower. Her name is Christine (Christiane Kruger.) he asks her to leave but she forces him to drive her elsewhere. Stealing his car keys, she leads him into a hallucinogenic dance party. Following her into the party she shows him a lesbian themed video of her with what appears to be his wife wearing a veil. He sees the familiar scar on her neck and the snake shaped ring that Helen wore. John soon finds himself in a world of intrigue.

First and foremost – this is not a giallo in the traditional sense. The body count in this film is restrained. It is more of a mystery film with a few small elements of giallo popping in occasionally. The main plot for the film is interesting and, unlike Freda’s Iguana with the Tongue of Fire, the plot can be inferred by the audience before the big reveal at the end of the film. This in itself makes the film a much more cohesive affair. I felt that the script for this film was pretty interesting and should satisfy most filmgoers. It has enough twists to be interesting but never veers so far off course as to become totally ridiculous.

The direction by Riccardo Freda is solid. He captures some beautiful nightlife shots in London and some Mario Bava inspired interiors that are very colorful. The cinematography for the film is strong throughout. That said, the film has two things that work against it due to budget constraints. The budget for the film becomes obvious to the viewer during a ridiculous skiing sequence and two car crash sequences. The car crash is very clearly a toy model and the skiing sequence involves some of the ugliest and clumsiest green screen work ever done.  It is a shame that both of these scenes come so early into the film and throw off the expectations of the viewer. Aside from those scenes, the film is very competently shot.

The film was shot in 1969 and features a little more nudity than was common in films from that era. Unlike some other films there are no sex scenes, so the film never crosses the line into pure exploitation.

The acting in the film is enjoyable. The film has some beautiful European actresses – Christiane Kruger, Barbara Nelli, and Margaret Lee. I would argue that this is one of the better looking casts that I can recall from that time period. Christiane Kruger is really stunning. The film benefits from a restrained performance by Kinski as the cuckolded husband. I enjoyed watching him play the straight man for once. Kinski is always interesting to watch on screen.

Arrow Video have provided a brand new 1080p HD transfer that was remastered specifically for this release in 2018 using an MPEG-4 AVC encode from a 2K scan. The film is presented in 1.85:1 aspect ratio. Here is what the booklet had to say:

“Double Face / A doppia faccia is presented in its original aspect ratio of 1.85:1 with Italian and English mono audio. Scanning and restoration work was completed at L’Immagine Ritrovata, Bologna. The original 35mm camera negative was scanned in 2K resolution on pin- registered Arriscan. Thousands of instances of dirt, debris, scratches, picture instability and other instances of film wear were repaired or removed through a combination of digital restoration tools and techniques.

All original materials used in this restoration were accessed from Surf Film.”

This transfer looks fantastic. The film has some very colorful scenes in London’s night life and the beautiful driving scenes look fantastic. 1969 was a good year for style and the film has a lot of visual flair. Fine detail is solid. The film has a good field of grain. The grain can be fairly saturated during some darker scenes but I was never bothered by this.

Double Face has been given two LPCM Mono tracks – Italian or English. Here is what the booklet had to say:

“The mono Italian and English language tracks were remastered from the optical sound negatives. The audio synch will appear slightly loose against the picture, due to the fact that the dialogue was recorded entire in post- production, as per the production standards of the period.”

The audio options are both enjoyable and pretty different. The English option is much more restrained than the Italian option so depending on which option you choose the film will be fairly different. This is one of the few films that I have seen recently where this is a pretty important choice regarding tone. The soundtrack is great whenever it happens but there are certain lulls where the film is strangely silent due to all of the sound coming from dubbing. The composer Nora Orlandi does a great job under an assumed name of Silvie Saint Laurent.

Double Face is an entertaining and enjoyable mystery-thriller with Klaus Kinski playing it straight for once. Fans of Italian cinema from this era are sure to be entertained. The film also features a bevy of European beauties that will entrance many viewers. The film features a fantastic score from Nora Orlandi that is explored in depth in two fantastic supplements. The new transfer by Arrow Video looks great. Fans will be happy to see the work that Arrow has put into this film.