Dora and the Lost City of Gold (Blu-ray)

If you’ve been missing live action family films in recent years then look no further than Dora and the Lost City of Gold. It is based on the popular Nickelodeon TV show, Dora the Explorer. I only know the show by name since my sister-in-law had mentioned it years back since her kids used to watch it. I might not be the target audience for this film, but it was refreshing and mostly enjoyable after countless Disney remakes and animated features as of late. Really, the film has a very 90’s vibe to it as this film could’ve easily come from that era, save for a few modern touches, notably with the effects and what have you. I can’t comment on its loyalty to the source material, but it’s a solid adventure film that many should enjoy. Let’s dive in further, shall we?

When we first meet young Dora (Madelyn Miranda), we see that she indeed loves adventure, she’s born in the Peruvian Jungle and both her parents are explorers and she goes on adventures with her monkey named Boots. She’s close with her cousin Diego, but unfortunately his family moves him to Los Angeles, but Dora and her family remain in the jungle looking for the hidden Inca city Parapata. We flash forward to ten years later where Dora (now played by Isabela Moner) still loves her life and her adventures. Her parents decide one day that Dora needs to experience a more normal life while they travel to the lost city that they’ve discovered. Dora isn’t overly enthusiastic about having to move to LA, but her cheery demeanor stays with her. She reconnects with her cousin Diego (Jeff Wahlberg), but Dora seems to have fonder memories than he does. In fact, Diego thinks of Dora as a bit of an embarrassment as her carefree personality is a bit much. She doesn’t seem to have an ounce of self-consciousness and Diego informs her one day that she’s looked at as a joke by her fellow students. Still, Dora’s spirit remains high. On a class field trip, Dora and Diego and a couple of friends wander off before being captured by mercenaries. They’re taken to Peru where the kidnappers hope that Dora can lead them to the city of gold, but Dora and her friends manage to escape, setting the chase in motion.

Led by a strong performance from Isabela Moner as our title character, I actually enjoyed this film. It really is a solid adventure flick that we don’t see a lot of anymore. The pacing is on point, the characters all fit their characters well and the film (like its lead character) has a fun spirit to it. It’s also a relatively clean film, save for one moment where a character has to relieve herself in the woods. The PG rating ensures that parents can let their kids see it without it frightening them too much, but adults will also have something here to enjoy as well. I liked the early scenes too that showcase Dora’s carefree and sometimes clueless nature about social norms. When she first arrives to school and has to unload her backpack is an amusing sequence as well. The supporting characters get solid work here as well. Dora becomes a winner. There’s also a moment that turns into animation and pays a nice homage to the TV show.

Despite not having a 4K release, you’d think that this was in fact in the format. I can’t think of any negatives, so expect my usual comments here about the pristine transfer, strong background shots and striking colors. Certainly this is a strong visual film, so the nice images only enhance the viewing experience. The effects blend with the live scenes very naturally without ever feeling phoned in or fake looking. Details are strong and overall, this is a problem free transfer that will likely leave viewers with no complaints. The image is AVC encoded with a 1.85:1 transfer.

Usually we get Atmos tracks from 4K releases, but this marks one of the rare exceptions. The film rocks and rolls pretty much across the board. Thankfully it doesn’t become problematic where we constantly reach for the remote to adjust the volume. Instead it remains a steady track. Like the transfer, this track remains problem free.

Despite a cheesy sequence here or there, Dora and The Lost City of Gold becomes a winner. It’s a family film that the whole family can enjoy. The Blu-Ray disc presents the film in a strong manner and has some decent features. Dora gets my recommendation. 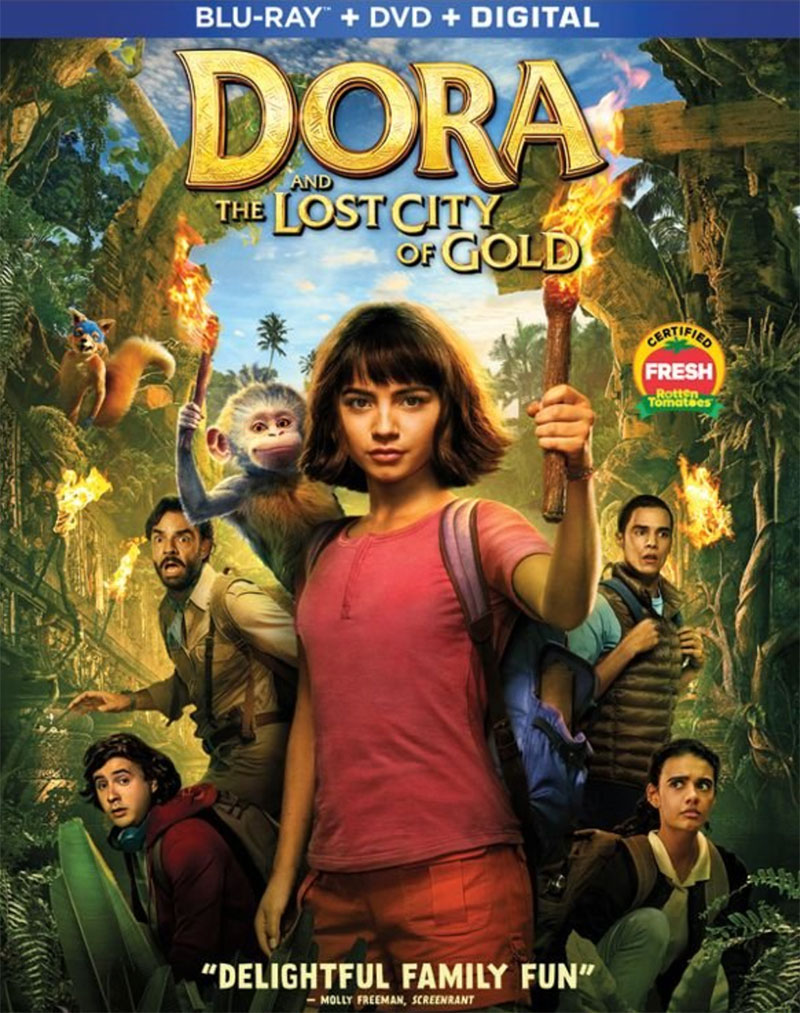