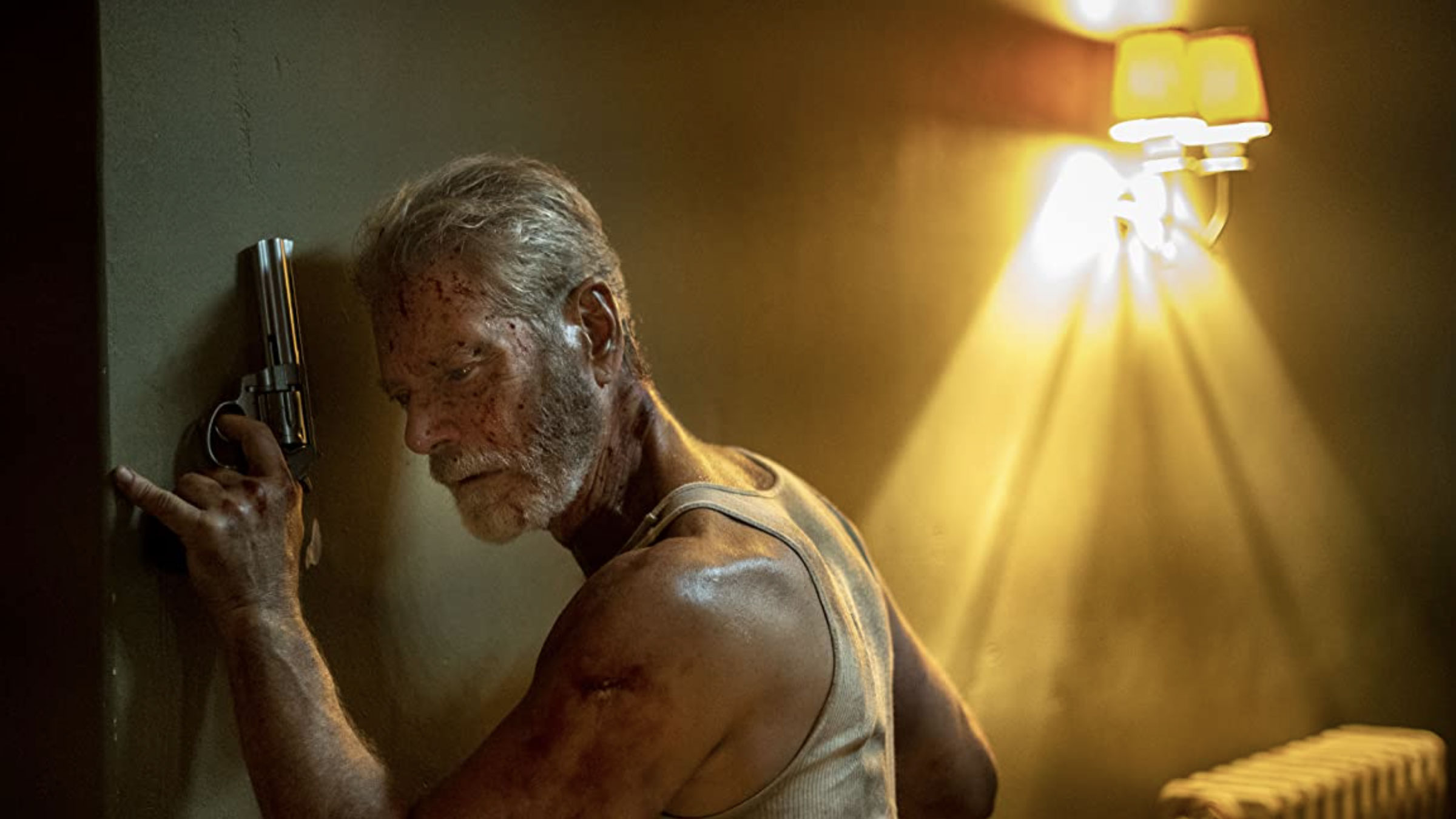 2016’s Don’t Breathe didn’t exactly lend itself to needing a sequel, but it was enough of a success that the powers that be greenlit it. Once again Stephen Lang returns as the blind man. Worth noting is that it is important to have seen the first film before diving into this one. While never confusing, it will easily help with connecting the dots. I believe that was my issue on first viewing. It has been some time since I first saw the original and I felt I needed some brushing up. A similar thing happened with the sequel A Quiet Place 2. I just felt that I was left out in the cold a bit. I pride myself on having a good memory, but when you watch as movies as I do, things can be jumbled. Anyway, let’s look at what Don’t Breathe 2 has to offer.

Picking up eight years after the events of the first film, we find blind Army vet Norman Nordstrom (Lang) who has taken over parenting duties of 11-year-old Phoenix (Madelyn Grace) after her birth mother was killed in a father. Or so Norman tells her. After a somewhat lengthy setup, we get into the heart of the story and realize some men are trying to break into Norman’s house. What they want exactly is something I won’t reveal as it’s best for the viewer to discover. What I will say is this sequel throws more than enough at us. It isn’t necessarily confusing, mind you, but it is a busy film. Regarding my thoughts earlier about being familiar with the first film, I kept wondering if the events seen here are a reflection from that film or just an entirely new plot created for this sequel. I still need to see that film again, but all will be revealed. My grumblings are more just the curiosity factor of seeing if and how the pieces connect. Our villains this time have more of a personal agenda, but again, I won’t reveal too much. The leader of them is Raylan, played by Brendan Sexton III and his crew. One big change with this sequel is Norman is more the hero than the villain. You could argue he’s an anti-hero, but it does add a nice change of pace.

To sum up, I feel this sequel wasn’t needed, but is still better than it could have been. I think a lot depends on how far you’re willing to go with this premise. I recall a review comparing Norman to Matt Murdock/Daredevil and that wouldn’t be unfair. At times he gets out of one too many tight situations that it’s a bit hard not to roll our eyes a little bit. On the plus side, the film isn’t quite as predictable as the trailers might’ve led you to believe, and there’s enough twists to keep things interesting. It takes a little while to kick into high gear, but once it does, it can be enjoyable. It comes across as more of an action flick than horror at times, but I enjoyed some of the plot reveals. The conclusion might surprise some people as well.

While certainly a darker film in terms of visuals, the AVC encoded transfer still does a nice job of detailing and colors. The print is pristine as it should be and I was never too put off by anything to nitpick too badly here. Background shots were sharp as well.

Also strong is the DTS HD track which features the clarity I expect, but also the punch as well. All the channels get plenty of usage and there’s nary a dull moment here. It keeps the viewer engaged as it should.

I am right down the middle on this film. It lacks the impact and certainly the freshness of the original, but it still held my interest. I think the plot, while busy, has enough tricks up its sleeve to keep the viewer engaged. Like the first film, it might lack replay value, but it is worth a rental at the very least. Be sure to stick around through the end credits.