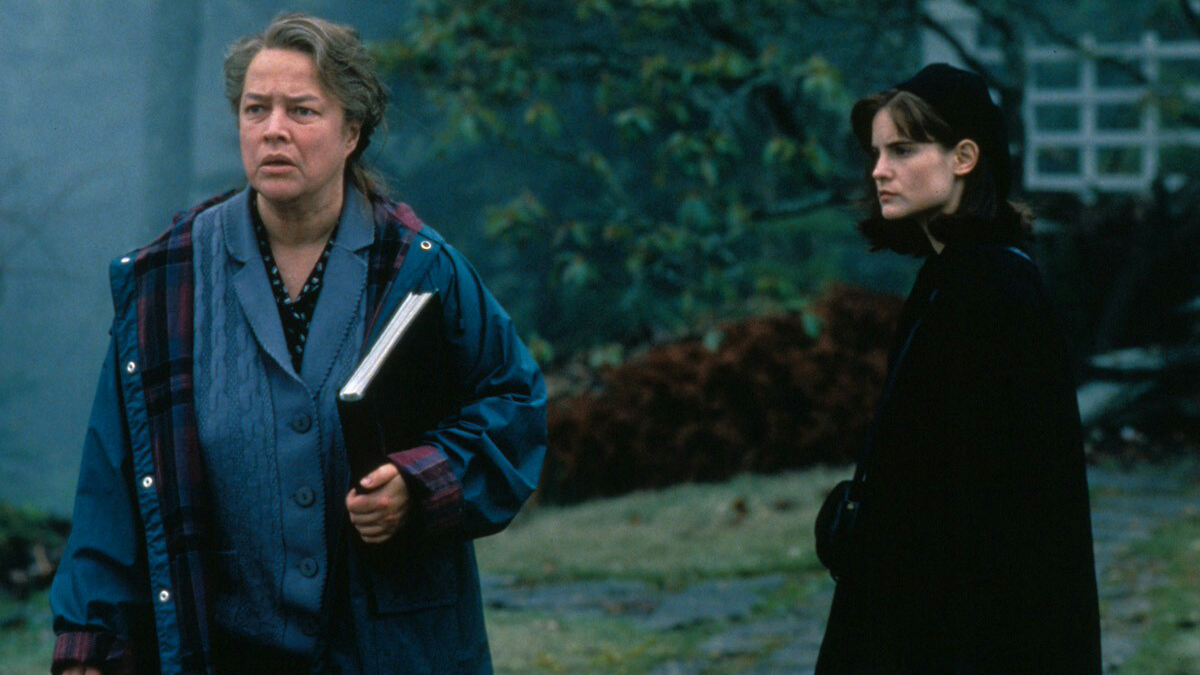 1994 was a great year for movies. That year the contenders for Best Picture (in the ceremony that aired in 1995) were Forrest Gump, Pulp Fiction, Quiz Show, Four Weddings and a Funeral, and The Shawshank Redemption. Forrest Gump took home the prize, but I think people would have been just as happy to see either Pulp Fiction or The Shawshank Redemption take home the big prize that night. The reason I am bringing this up is that The Shawshank Redemption was the sleeper hit of that year. Based on a short story by Stephen King, the understated and beautifully realized film is still one of my personal favorites and considered by many to be one of the best films of all time. While that film was beginning its successful run, Castle Rock produced another subtle film based on an understated Stephen King novel with Dolores Claiborne which was released one year later.

The film opens with a struggle between Dolores Claiborne (Kathy Bates) and the rich widow Vera Donovan (Judy Parfitt.) When Vera falls down the staircase, she does not survive but for a moment. The postman arrives just as Dolores raises up a marble rolling pin to bash in Vera’s head. Interrupted, Dolores drops the rolling pin to the floor. In New York, Dolores’s newspaper reporter daughter Selena (Jennifer Jason Leigh) receives a fax that her mother is going to be brought up on murder charges. This is bad timing because Selena was about to start work on her biggest scoop. She comes back to the small seaside town where her mother has worked for years as a maid for Vera Donavan and where her father perished years earlier under suspicious circumstances. Upon arrival, Selena bumps into Detective John Mackey (Christopher Plummer) who has been upset that he was unable to convict Dolores for the murder of her husband Joe St George (David Strathairn) eighteen years earlier. The story unfolds in two different times as little details and memories are revealed.

This film, written by Tony Gilroy and directed by Taylor Hackford, is a well-put-together mystery and thriller. Screenwriting techniques that this film undertakes are not easily accomplished, but the film makes it look easy. This is not one of Stephen king’s best known novels, but the story itself is strong and has great character development. Tony Gilroy (who is a well known writer and son of playwright Frank Gilroy) has given the material great attention and made the material shine with each piece falling into place with a steady pace.

Shot in Nova Scotia (filling in for Stephen King’s Maine) on an island called Westport, the film has a dreary and naturalistic look that does not try to show off too much. Taylor Hackford did a great job of directing the talent at his disposal and has surrounded himself with some exceptional character actors. Kathy Bates is very convincing in her role. David Strathairn does a great job with the material. Jennifer Jason Leigh and Christopher Plummer both turn in good performances to round out the cast.

This is one of those films that has a certain unpleasantness to the material that may reduce the amount of times a person may want to see it. That does not keep it from being an excellent piece of filmmaking. This is a well-done film that may be less-known simply because of the excellent Stephen King adaptation that preceded it by a year.

Warner Archive did a great job on the transfer of the film using an MPEG-4 AVC codec of a brand new 2K restoration. The image looks natural and very good, retaining most of the grain and detail. Unlike many films from this period, this film is sharper and more detailed than most. I was glad to see a film from the Nineties where the film stock was not causing the softness associated with this time. That said, the climactic scene during the eclipse does have some digitally manipulated imagery that does not hold up so well today. It did not take me out of the story, but it hampers some of the realism that the film had achieved. I was very pleased with the attention to detail that Warner has given this release.

Dolores Claiborne boasts a DTS-HD MA 5.1 surround track that is not particularly active, but sounds good nonetheless. This is a film that relies heavily on dialogue, some whispers and some shouts. That said, when necessary the score by Danny Elfman is given enough berth in the sound field to amplify the emotions displayed on screen. Dialogue is crystal clear and I had no real complaints as I watched the film.

Dolores Claiborne is a meticulously well-crafted Stephen King adaptation. With great actors and a great plot, this film is definitely worth watching. The supplemental commentary by Taylor Hackford is very informative. This film has some rough material that may limit replay value, but I enjoyed getting to watch it.