Stephen King’s classic novel The Shining is one of the most influential horror novels of all time. It made good sense that the visionary director Stanley Kubrick would take on the task of adapting the novel and it also made just as much sense that he would use the novel as a backdrop to explore themes that interested him. Changes were made that dropped or replaced elements of the novel. The result was one of the finest horror films of all time. Stephen King was famously very upset with the way that Kubrick had changed numerous aspects of the novel. For example, (SPOILER ALERT) in the novel the Overlook Hotel is blown to pieces by an overheating furnace. In the film, Jack Nicholson’s Jack Torrance freezes to death in the cold. The film removed some of the purely supernatural elements of the story (such as the moving lawn creatures) which in my opinion led to a more disturbing and convincing psychological horror. There is nothing more frightening than a parent’s capacity for violence to his child, and Kubrick explored that theme brilliantly. By stripping away the layers of supernatural to their most basic, the Overlook Hotel became more ominous, more frightening, and more real. In 2013, Stephen King released Doctor Sleep, a true sequel to his classic novel. I will go into detail below as to how Mike Flanagan was able to find a way to blend the two iconic visions into the 2019 film.

The film begins in 1980. A little girl named Violet walks from her parents’ camping trailer towards a creek. Next to the creek a woman sits with a top hat on her head. She introduces herself as Rose the Hat. She talks to Violet about her special abilities. From the woods come the other members of the True Knot as Rose grabs Violet’s hands. Violet is next seen on a missing persons poster. Meanwhile, Danny Torrance dreams of the Overlook Hotel and Room 237 with the evil that he encountered there. Awaking from his dream he walks to the restroom. Inside the restroom, that thing in the bathroom appears. He freezes up after closing the door. His mother finds him there. At a park, Doc talks with Danny about his shining and how Danny must start to turn the evil that seeks him out against the terrors themselves. He hands Danny a box and tells him to memorize that box and build one in his mind so that he can put the evil away in the box.

In 2011, Danny Torrance (Ewan McGregor) awakens next to a naked woman from a drunken night out. He has become an alcoholic. His memory starts coming back from the night before where he had beaten a man at a bar and then proceeded to spend his last dollars on cocaine. He steals some cash from her purse to make up for some of the money he had blown on the coke. As he steals the money, her young child comes into the room. This is Danny hitting bottom. Elsewhere, Rose the hat takes on a fifteen year old protege named Rattlesnake Andy who can put people to sleep simply by talking to them. Rose promises her a long life without aging if she joins her group of traveling specters. Meanwhile, there is a special little girl in New Hampshire named Abra Stone. She has the shining in a big way. As Danny works to stay away from booze, Rose and her cohorts seek to find Rose so that they can steal her “steam,” essentially her spiritual essence which gives them life. Soon Danny will need to step in and protect Abra from the dark forces that want to feed off of her.

As the film began, hearing the opening tones of The Shining brought me happiness and dread immediately. These are hard shoes to step into and even alluding to that classic film is a tremendous risk. Some of these aspects work very well and some not so well. For example, the final sequence of the film that harkens back to the first film is really cool and works well. On the other side of the spectrum, the actors they chose to reprise iconic roles are close enough in appearance to harken back to the original but also different enough looking or sounding that it inadvertently will take a viewer out of the film.

The truth of the matter is that as a sequel to The Shining, Doctor Sleep works as well as any sequel could but it can not truly compete on the same level. The film adaptation is remarkably adept at bringing the novel to life, but the novel itself is not in the same league when you compare it to The Shining. If this story was not connected, it would be a strange and enjoyable novel and film. The problem only lies in the constant comparisons that one makes between the two.

There really is a lot to enjoy in the film and Stephen King himself endorses the film as an excellent adaptation of his work. If you can manage to get past your affection for the prior novel and film, the story is engaging and interesting. It has hints of the excellent film Near Dark and some interesting supernatural concepts that I found clever. The final half of the film is very suspenseful and the writing actually improves as the film continues with very few missteps along the way.

The acting is well done across the board. Ewan McGregor is very likable as Danny and conveys a lot of emotional depth in the role. His ability to play addicts works perfectly for the part. Rebecca Ferguson does a laudable job in the role of Rose the Hat, although I felt that some of her scenes were unintentionally stretched out and lost some momentum. The young girl who played Abra, Kyleigh Curran is really awesome in the role. She plays the role with a confidence that makes the film really come together. She will be one to watch in the future if she can land more standout roles like this. I also really enjoyed Cliff Curtis in the role of Billy Freeman. Chris is a great character actor and creates empathy for his character well.

Spoiler alert: The worst aspect of the film (and of the novel) is the uncomfortable death sequence of a child early in the film. In the novel, it’s terrible. In the movie, it is almost unbearable. I would have been fine with them taking a softer touch on that sequence. This will probably turn off some viewers and it definitely is a good example where less can be more. Aside from that, the film really gets a good groove going and has a great finish. While the start of the film is a bit slow, the tension builds very well for the second half of the film.

The first half of the film is almost a perfect adaptation of the first half of the book, but I have not finished the novel and can’t speak to the second half yet. As I mentioned in the first part of the review, director Matt Flanagan managed to convince Stephen King that it would be appropriate to use the Overlook Hotel in Doctor Sleep. The sequences that incorporate the Overlook work wonderfully and make it necessary that I am going to need to finish the novel to see how different the film adaptation’s ideas were.

It doesn’t take the shining to read the mind of filmmaker Matt Flanagan’s visual approach to the film. He harkens back to some of the original Shining in some key scenes, but the overall lighting of the film is largely drawn in blue and green tones with hints of autumn colors. Cinematographer Michael Filmognari does solid work and the film is visually very appealing. As one might expect, it looks superb on Blu-ray thanks to a well-done MPEG-4 AVC encode in an aspect ratio of 1.85:1. While it cannot live up to the visual splendor of Kubrick, it still is one of the most visually exciting films of the year.

I love the score from The Shining. Hearing those first notes made me excited. The Newton Brothers, like the cinematographer, have done a solid job of paying homage while also making a unique work. My only critique would be that I would have enjoyed even more nods to the original score. The Atmos track sounds fantastic. The film really uses the channels during the final scenes and an encounter in the woods. This is a great sounding track.

Oddly, only the Theatrical Cut contain the supplements. The Extended Version disc is the film only.

Overall, Matt Flanagan has done a remarkable job of adapting Stephen King’s novel and also making fans of the Kubrick film feel at home. Despite one sequence that I found troubling, the film is a very well-done thriller and only fails to live up to the lofty expectations of comparing to arguably the greatest horror film ever made. I highly recommend checking this one out. The film starts off slowly, but the last half of the film is very exciting. I hope that this film finds a stronger fan base now that it has left the theater, because it is one of the better Stephen King adaptations. 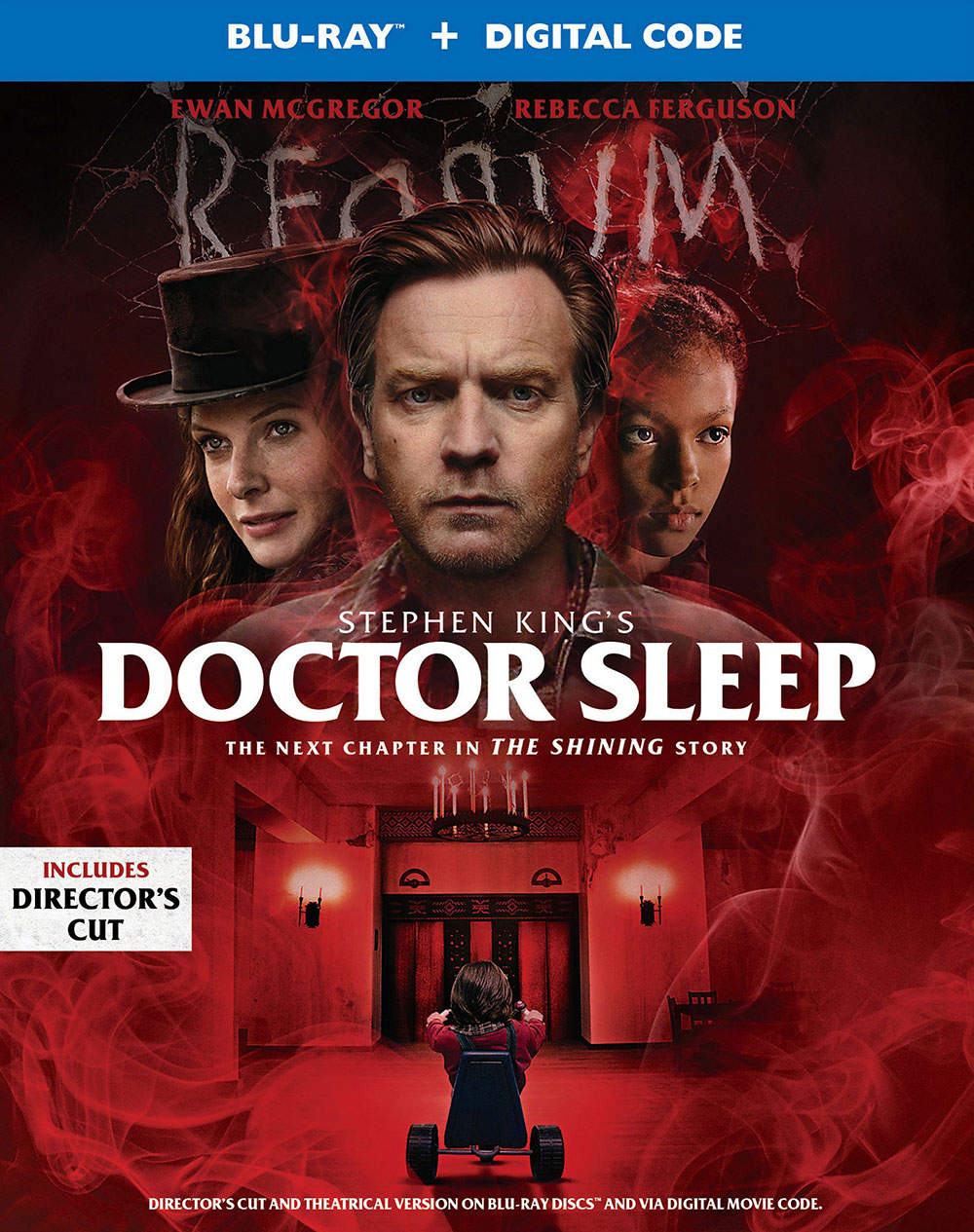