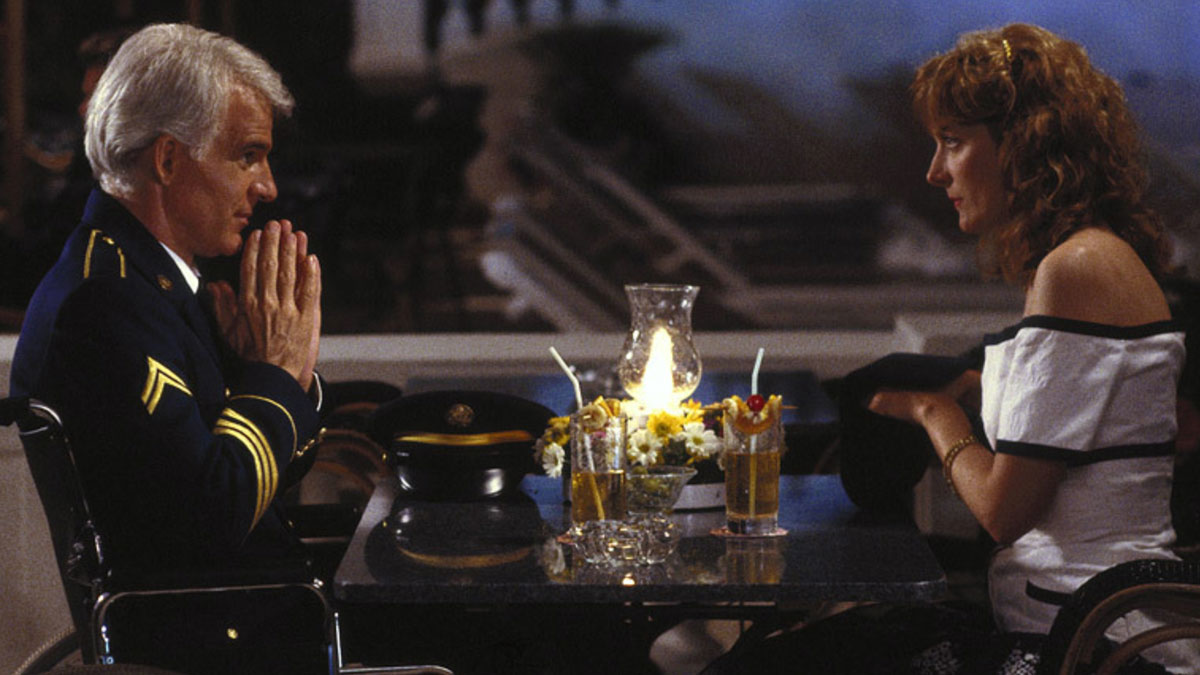 Recently I purchased the new Collector’s Edition Blu-ray of Dirty Rotten Scoundrels. Directed by Frank Oz and starring Steve Martin and Michael Caine, this is one of my favorite films of all time. Growing up, this was a staple in our household and it is one of the few films that I watch yearly with my wife and children. I owned the previous Blu-ray, but I could not resist upgrading when I saw that there was a new 2K scan used by Shout!Factory for the release. While on vacation with my kids, we did our annual viewing of the film.

The plot revolves around two con men. A rich English con man, Lawrence Jameson (Michael Caine,) specializing in conning rich women, meets a brash American con man, Freddy Benson (Steve Martin,) on a train ride to Zurich. Lawrence lives in Beaumont Sur Mer, a fictional town in the French Riviera similar to Nice or Cannes. Freddy plans on conning people on the Riviera including within Beaumont Sur Mer, and Lawrence fears that this could draw unwanted attention to his stalking ground. He uses a con (that I won’t spoil here) that leaves Freddy in his debt, and takes the opportunity to send Freddy back to the States. When Freddy encounters one of the rich women that Lawrence had conned, (Lady Fanny of Omaha) Freddy decides to return to Beaumont Sur Mer and have Lawrence train him in the art of the con. After some hilarious antics, Freddy feels confident that he is ready to be a full fledged well compensated part of the operation. Lawrence is unwilling to fund Freddy from the cons due to Freddy being his pupil, explaining his payment is knowledge. Displeased that Lawrence is unwilling to pay him, Freddy decides to branch out on his own in Beaumont Sur Mer. Lawrence is unwilling to share the town. Freddy and Lawrence reach an agreement that whoever can con a woman out of $50,000 first will win the rights to stay in the town. That is when they meet an appropriate target, the kind hearted Unites States Soap Queen, Janet Colgate (Glenn Headly.)

This is easily one of my favorite movies of all-time. I literally think that I have seen this movie upwards of a hundred times, and it is still absolutely hilarious. Out of all of Steve Martin’s films, this provides the best material. When you see him as a character named Ruprick in what may be the funniest ten minutes of any film, you will have tears in your eyes from laughter. Michael Caine is brilliant as the more refined of the two con-men, a perfect counterpart to the brash American. These two should have been in more films together, because the result is absolutely glorious. Glenne Headly was up against two pros in top form, and she is pitch-perfect in her role. Sadly, she passed away two years ago. She was great in the film.

Frank Oz displays an amazing eye for location in this film. It is rare to say that a comedy film is absolutely gorgeous to look at, but this film is first class. The premise that Lawrence became a con man due to failing at artistic ventures and then focused on being a man of great taste is one of the most absorbing aspects of the movie. It is easy to believe thanks to the beautiful surroundings. It does not hurt that the cinematographer for the film was Michael Ballhaus. You might have seen some of his other films he was involved with like Goodfellas and The Departed.The score by Miles Goodman is great with extremely clever timing that amplified every scene of the film.

At the end of the day, if you have never seen this film, you owe it to yourself. It is one of the best comedies ever made in my opinion.

Shout!Factory have done a solid job on the new transfer of the film using an MPEG 4 AVC codec of a new 2K scan. The previous Blu-Ray released by Warner was actually pretty good looking, so I was curious what the improvements would look like. Overall, the improvements are relatively minor but for a dedicated fan may be worth upgrading. The cinematography by Michael Ballhaus has always been some of the finest cinematography ever associated with a comedy. In this new edition, fine detail is better and the colors pop a little bit more. If you own the previous DVD release, this is the version to buy. If you own the previous Blu-ray release, the differences in visual presentation will not be a huge jump.

I am fairly confident that this is the same competently done surround track from the Warner release. Dirty Rotten Scoundrels has one of my favorite scores. I am not sure if it is just because of how many times I have seen the film, but I just love everything about the score by Miles Goodman. It somehow brings out more from the comedy while feeling every bit as classy as the surroundings of the film. The surround livens up the film and is a good example of what surround can do to broaden the sound field of catalog films. I thought everything sounded great, but don’t expect a ton of directionality, or a vast difference from the Warner Release.

Dirty Rotten Scoundrels is one of the few films that I watch every year. My wife and family love it as much as I do. If you have not seen it, you are in for a treat. The new Collector’s Edition by Shout!Factory is not incredibly different from the previous Blu-ray release by Warner, but the new 2K scan definitely looks nice. Fans of the film will surely want to upgrade from their DVD copies to this version, but fans that own the previous Warner Blu-ray will need to evaluate whether or not a new 2K scan and a new interview with screenwriter Dale Launer are worth the cost of upgrading. I couldn’t help but pre-order it when it was announced and I am happy with my purchase, but you have all the facts to make up your mind. Highly recommended!