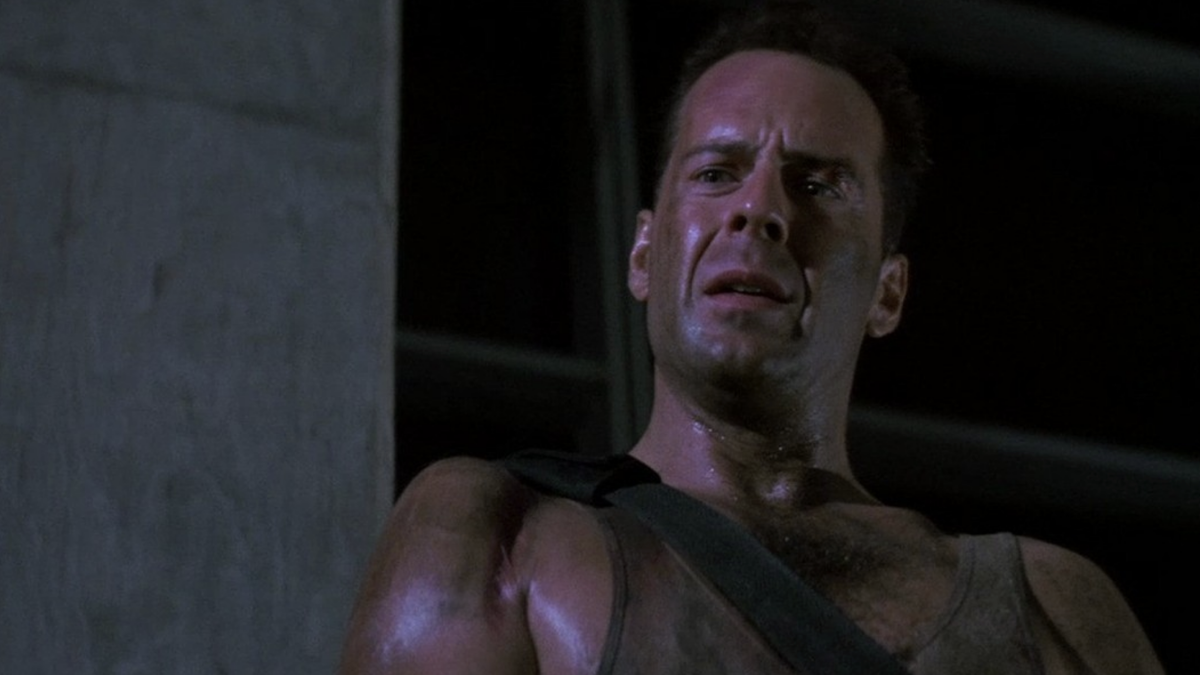 Three decades ago a relatively unknown actor by the name of Bruce Willis was given a once-in-a-lifetime shot. It paid off. Willis, best-known for a television comedy, Moonlighting, only had a few feature films to his credit. But these kinds of risks usually have a way of working out and in the summer of 1988 Die Hard hit theaters. Suffice it to say that the movie world has never really been the same. The success of Die Hard changed the modern-day formula for how films were made. And it gave us the action/adventure template – “terrorist with a bomb” – that so many movies would follow. And what continues to amaze me is that a film like this wasn’t made before. Like other genre redefining films, it’s hard to really put a finger on what it was and is that makes this film so enjoyable. Or maybe it’s best not to overanalyze what makes a film so great and just sit back and watch it. So I did, for the umpteenth time.

John McClane (Bruce Willis) is ready to enjoy his vacation time with his family this Christmas holiday. McClane is a New York City police officer, but travels to Los Angeles to spend some time with the wife. The two have a rocky relationship, but McClane wants to patch things up and be together again. McClane meets his wife at her office building, where her company is holding a Christmas party, and have the building all to themselves. While McClane is cleaning up and making little fists with his toes, things take a more sinister turn, as a team of terrorists invade the building. As the terrorists begin to start the wheels turning on their mission, McClane is able to sneak off without being seen. With his trusty service revolver, McClane tries to battle back against the terrorists, while also attempting to alert the police force. It’s McClane against mastermind Hans Gruber (Alan Rickman) and his team of shock troops, who will survive?

Yes, Die Hard won’t leave you scratching your head trying to figure out the plot. I’d said it in the introductory paragraph “terrorist with a bomb.” That’s it. But looking at it again, the performances are so iconic it’s hard to tell who really is the best. Certainly Alan Rickman’s “Eurotrash” Hans Gruber can go down as one of the best movie villains in cinematic history. Add to that Die Hard is officially considered a “Christmas” movie. Granted we’re not talking It’s a Wonderful Life or Miracle on 34th Street, but what better way to celebrate the holiday spirit than by watching John McClane kill terrorists? Merry Christmas!

The film has gone through multiple incarnations over its three decade history and I’m willing to bet has seen every home video format that’s been known to exist. I think I still have the old full frame LaserDisc laying around somewhere if that tells you anything. That said, this is the creme-de-la-creme of home video releases and it goes without saying that the film looks better than it ever has. Fox has given this a new 4K remaster and it shows. The film, as we all know, is very dark – taking place in the bowels of an office building and over the course of one night. There’s not a lot of natural light to be seen (pardon the pun). That said, it gives the feel a, for lack of a better term, very 80’s look to it. Harsh contrast, overhead lighting – it’s all things I associate with films of that decade. That’s not to say it looks bad, though. Detail has been improved, the HDR gives new color depth to some scenes that I’ve witnessed dozens of times over. It’s a great thing to have a film look this good that’s this old. Well done!

Sadly, there is no next generation audio mix found on the set, but the included DTS HD Master Audio mix is by no means bad. We’ve all seen the film, we all know what happens and when and where the action scenes are. What really impressed me were the vocals. They sound extraordinarily rich and crisp. At this point in time I’ve become so accustomed to Alan Rickman as Severus Snape, it’s hard (and odd) to see him as a true villain here. Close your eyes and you expect to hear the words “Harry Potter” come out of his mouth at any time. I’m getting a bit sidetracked, though. Suffice it to say that this DTS HD Master Audio mix does the film justice. I see no need for anyone to be disappointed here.

The same supplements are present here that were on the previously-released Blu-ray. As such, we’re not going to re-invent the wheel.

There are countless of action films, but Die Hard is one for the ages. It started a new trend in American films and one that’s not showing any signs of waning. It’s also a good sign when studios are putting some of their marquee titles on the new 4K format. You know what that means? More to come! There’s no reason this shouldn’t be a part of your 4K collection.