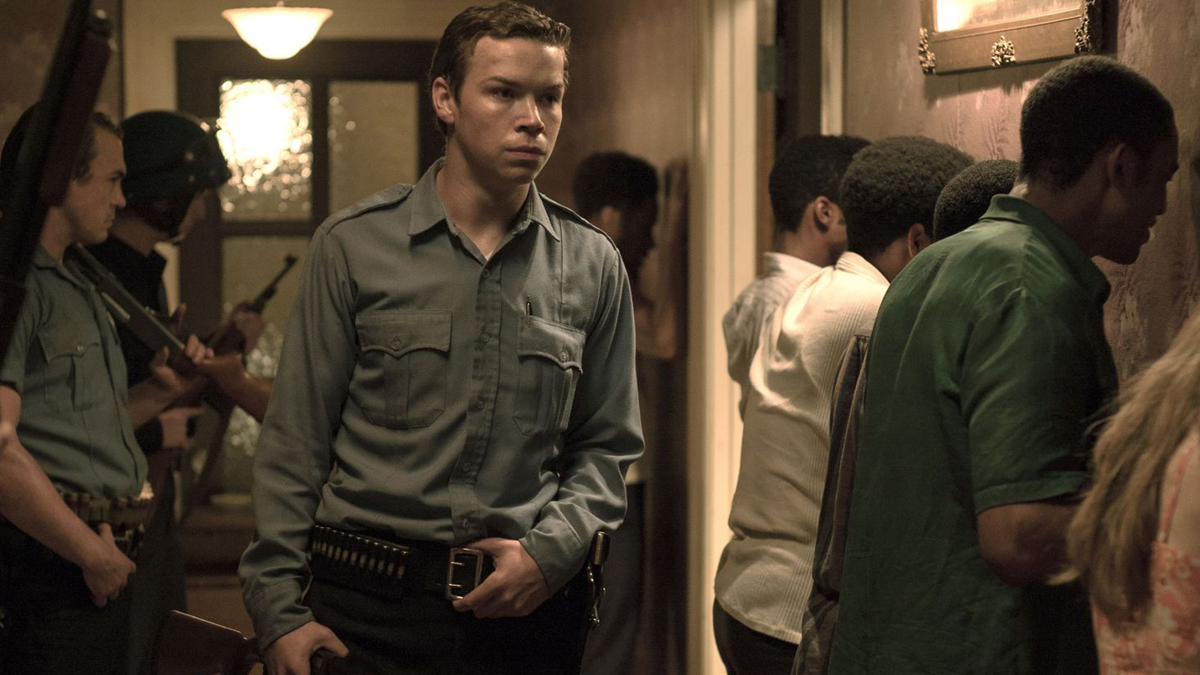 In a film that draws strange comparisons to events happening today, Detroit tells a dramatized story of a real life event from the summer of 1967. The film might hit a bit close to home for some viewers, but it does have some very impactful moments and has something to say for itself. I don’t feel it’s always effective, and several moments run on far too long, but it certainly has a lot working for it. I think with some editing and a tighter script that this would’ve proven to be a much better film than the final product. There’s enough tension on display and the performances so strong that they carry us through most of it. I won’t say Katheryn Bigelow is my favorite director, but she does a capable job here. It just feels like sometimes her direction is too heavy-handed for its own good.

It’s July 23, 1967 and an unlicensed raid is staged by the Detroit police. This creates tension in the community and riots begin to break out. On day two, we see two cops patrolling the streets. Eventually they begin chasing a looter who flees the scene. One of the officers, Philip Krauss (Will Poulter) shoots the man who manages to escape, but eventually dies. This opens an investigation where the police captain suggest murder charges against the officer. Officer Krauss is told to continue his service, but to cool it down while he’s on patrol. A parallel storyline follows a black R&B group named The Dramatics. We’re led to believe that the riots led to their gig being shut down and the musical group not being able to further their career. The lead singer of the group and his friend rent a room at a local motel. They meet two white girls and become friendly. They’re introduced to two other men who stage a prank with starter pistol. One of the men decides to fire blanks from his pistol to frighten the police. The police mistake this for a sniper and open fire on the Algiers motel where they’re all staying. We spend a lot of time in the motel where the police (led by Krauss) try effortlessly to get some answers about the shooter and where the gun is. These scenes go on and on. So much in fact that it serves to seriously undo much of the tension. There’s only so much interrogating we can witness before it becomes repetitive and thus ineffective. John Boyega plays Melvin Dismukes, a black police officer who gets stuck in the middle of all the confusion.

There’s no denying that there’s an important story to tell here. I just feel that the film meanders on for far too long that it loses much of the impact it would’ve had. A good 20 minutes could’ve been taken out and the story remained unchanged. Bigelow just doesn’t know how to quit and in turn this lessens the film. All the actors, especially Poulter do fine work, but less is more would’ve been welcome here.

We get a fine transfer here that gives way to strong colors and details. Much of the film is limited to a confined space, so it’s not especially flashy, but what is presented is shown with sharp detail. The image is AVC encoded with a 1.85:1 ratio. The print is fine and free of flaws as well. Flesh tones appeared smooth with no noticeable issues. Fans will be pleased with the results.

The DTS HD track is pleasing as well. During the riot scenes, we hear plenty of background noise such as shots being fired and glass shattering. Vocals were clear too. There’s a lot of intimidating and shouting going on during much of the film which all comes across with strong clarity. The track remained fairly active across its lengthy running time. It complements the film well.

After two viewings, my thoughts on Detroit remain mixed. I agree there’s an important story to tell here (one that strangely echoes recent events), but it’s also too meandering. The film goes well past the 2 hour mark, but less would’ve been most welcome here. Bigelow beats us over the head with endless scenes of interrogating and brutality that they lose their impact. We get one scene too many where the characters are holed up in the motel room. I think this is a worthy rental with reservations.