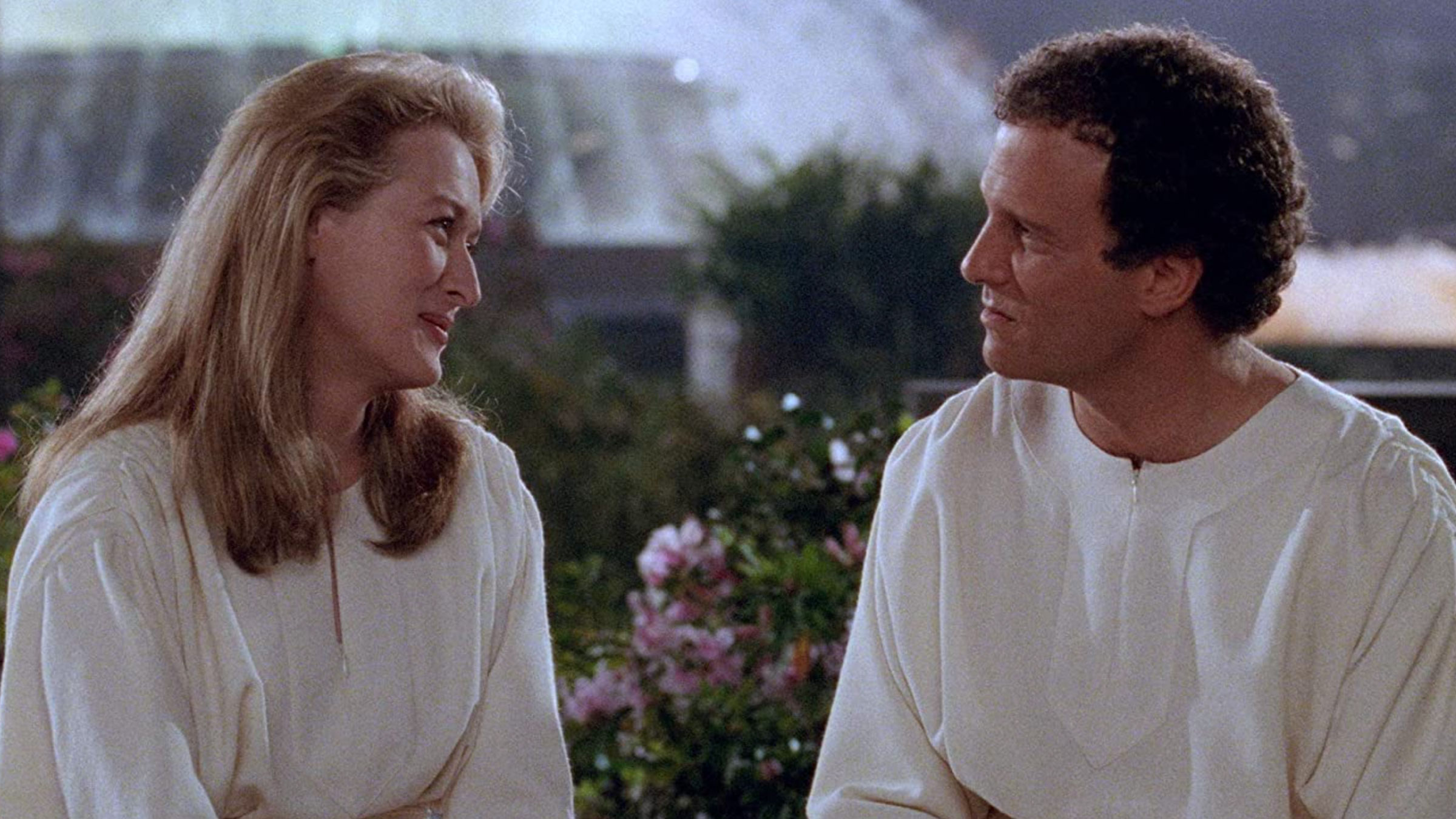 The concept of life after death is one that’s perplexed the human race since it started. There have been many takes on this and in 1991 (well, technically 1990) Albert Brooks wrote Defending Your Life. Brooks has a certain slant to his witticism and you either appreciate it or you don’t. I do. Brooks really made a name for himself with Lost in America, starring he and Julie Hagerty (Airplane!) and then followed that up with the critically-acclaimed Broadcast News with Brooks being nominated for Best Supporting Actor (he lost to Sean Connery in The Untouchables). A few years passed and Brooks wrote and directed Defending Your Life. Itself a loose remake of the Warren Beatty vehicle, Heaven Can Wait. Life. Death. What happens when you die? Here’s one take on it…

On his 39th birthday Daniel Miller (Albert Brooks) is hit by a bus. Yes, it’s something we all say will happen, but rarely does. He’s just gotten a new car and while distracted driving, enters what can only be described as the afterlife. He finds himself in Judgment City, a mix between limbo and purgatory (depending on your particular point of view). All of the recently deceased are there to be judged for what they did during their time on Earth. Daniel is assigned a defense attorney, Bob Diamond (Rip Torn) who explains that most on Earth use very little of their potential and spend their lives in fear. In short, the goal is that to overcome their fears is to evolve and to evolve is what it’s all about. While there he meets Julia (Meryl Streep), someone who had a seemingly perfect life during her time. We follow the trial as Daniel tries to prove his worth and, perhaps, find love…after life.

As I noted above, I’m willing to bet that if you could ask any person on the face of the Earth one question, it’d be “what happens when you die?” None of us will know until that time comes. Something. Maybe nothing. I’ve always liked the style of Albert Brooks and I’m even a fan of several of his characters on The Simpson’s. Yes, that’s a stretch when it comes to this film, but those in the know will get where I’m going with this. Defending Your Life won’t provide us with anything solid to base the rest of our lives on, but it’s an interesting take on what might happen when we all meet our maker. Brooks pulled double duty with this on the writing and directing (and acting) front and Meryl Streep is, as always, wonderful in her role. If, by some chance, this has been missed – give it a shot. Your life might depend on it.

It’s been a while, a long while, since I sat down and watched this film. Warner came out with a standard DVD of it a couple of decades ago. Yep, that was it. I can’t remember all of the nuances of that transfer, but that was then and this is now. And in the “this is now” department, the title is in the capable hands of Criterion. As anyone knows, they don’t exactly mail it in when it comes to how their discs look and sound. Having said that, the 1.85:1 AVC HD image has undergone a brand new 4K transfer that was approved by writer/director/star Albert Brooks. This is a very bright and colorful movie which seems a bit odd considering that it deals with the afterlife. Blue skies abound, the perpetual white robe worn by Brooks and Streep look sharp and stunning and everything seems in its right place. I did find that a bit of grain persisted in a few scenes. No matter, it gives the film a bit of character. Contrast is strong, colors are vivie and any and all edge enhancement that plagued the initial DVD release is a thing of the past. Suffice it to say that, as with all their other titles, Criterion’s shown this one some love.

Defending Your Life won’t (and didn’t) win any awards for sound. This movie isn’t really geared for dynamic audio, but nonetheless Criterion has given it a new DTS HD Master Audio 2.0 track. It works, but as I mentioned – this isn’t one that’ll test the limits of your audio setup. Vocals are sharp and crisp, there’s not a lot going on in the surround channels and most of the action is limited to the front stage. I can’t remember if the DVD was a 5.1 mix or mono but without doing an A/B comparison I’m willing to bet this version will win the battle of the speakers. In essence, this delivers what the viewer thinks it will – a solid audio presentation.

Criterion’s titles are often loaded down with extras and while that’s not the case here, it’s nice to see some new material created for this release.

The films of Albert Brooks are smart and funny. I’m willing to bet fans of Woody Allen naturally gravitate towards them. This, to me, seemed like a rather obscure choice but given that they’ve given his Lost in America and Broadcast News releases, perhaps not? Some new features have been added to the disc which is always a nice surprise and as usual, the video and audio have been given a good upgrade.