I’m always amazed at what passes for entertainment. Everyone’s different, I realize that. I mention this as I remember seeing previews for Deep Rising and thinking to myself “Good lord, are you kidding?” And, unsurprisingly, I’d never seen it until this viewing. The film is celebrating twenty years and while it hasn’t become something that would change cinema forever, was actually fairly entertaining (and has a huge fan base). Stephen Somers helmed the movie and would find more critical and commercial success with 1999’s The Mummy and 2004’s Van Helsing. Sporting a relatively unknown cast (at the time), but surprisingly good special effects, this epitomizes “guilty pleasure.”

As one might imagine, the plot isn’t that complicated. We meet John Finnegan (Treat Williams), the wise-cracking captain of a PT boat. He’s been hired to transport a group of heavily-armed thieves led by Hanover (Wes Studi) into the middle of the South China Sea. Finnegan asks no questions and he and cohort Pantucci (Kevin J. O’Conner) are not aware that Hanover and his men are actually headed for Argonautica, a cruise ship on her maiden voyage. They intend to rob it. However, they don’t seem to realize that sea creatures have attacked the ship and killed nearly everyone on board. Once aboard, Finnegan, Hanover and the others realize what’s happened and that the creatures are still inside. They meet up with a jewel thief Trillian (Famke Janssen) and the owner of the ship, Nigel Carlton (Anthony Heald), both of whom managed to survive. This small group now must do what they can to escape the sea creatures and vacate the ship before it sinks.

The movie didn’t challenge me much mentally as it’s one of those that you can figure out what’ll happen in the first fifteen minutes. And that’s OK.  Movies are an escape, so sometimes it’s best to sit back, relax and just be entertained. Having been on several cruises, I can say that when looking out into the water, I do have to wonder what’s below the surface. This probably isn’t the film to watch just before going on a cruise. If you can handle the unabashed corniness of the film, it’s really not that bad. It’s got great (for the time) special effects and Kino’s loaded up this disc to the gills with supplements.

Having never seen the film before, I don’t really have a basis of comparison with its outdated DVD counterpart. Nevertheless, the 2.39:1 AVC HD encode looks fairly good, with a few spots here and there that did raise an eyebrow with me. It’s a darker movie, but there are scenes in which the cinematography really shines. Black levels are strong as is contrast and detail seems sharp. I’ve seen films of this age look far better, but also far worse. Fans should be pleased regardless.

Included is a new DTS HD Master Audio soundtrack that has a few moments of greatness. It’s a very robust mix that’ll keep all of your speakers humming away. I don’t know the exact sound a sea monster makes, but the ones here really seem to get the job done! Vocals are pure, lacking any distortion and it goes without saying that the audio for this film exceeds the video. Again, it won’t disappoint and it’s one you’ll want to turn the volume up on.

Odds are that, given the age of this movie, you’ve seen it a dozen times or not at all. I was one of the latter. It’s fun, it’s corny and it’s pretty much everything you thought it’d be. To their credit, Kino has done a bang up job with this disc, weighting it down (see what I did there?) with new supplements as well as above average video and audio. For fans of this film, and there are a surprising number of them, this will be right at home on their shelves. 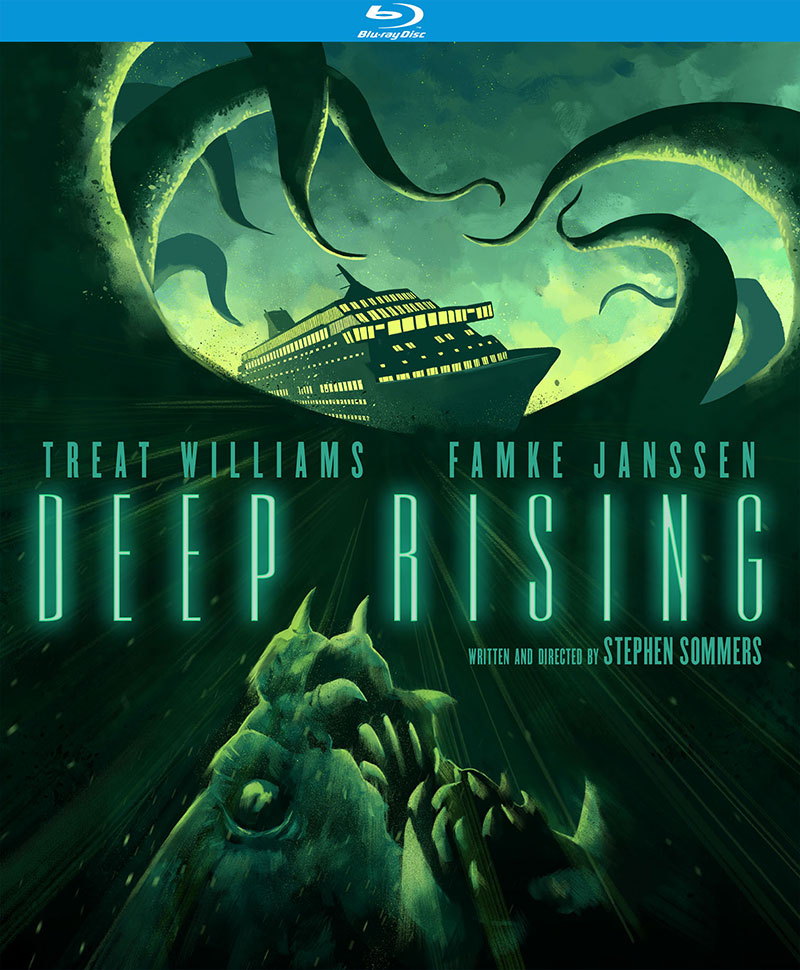