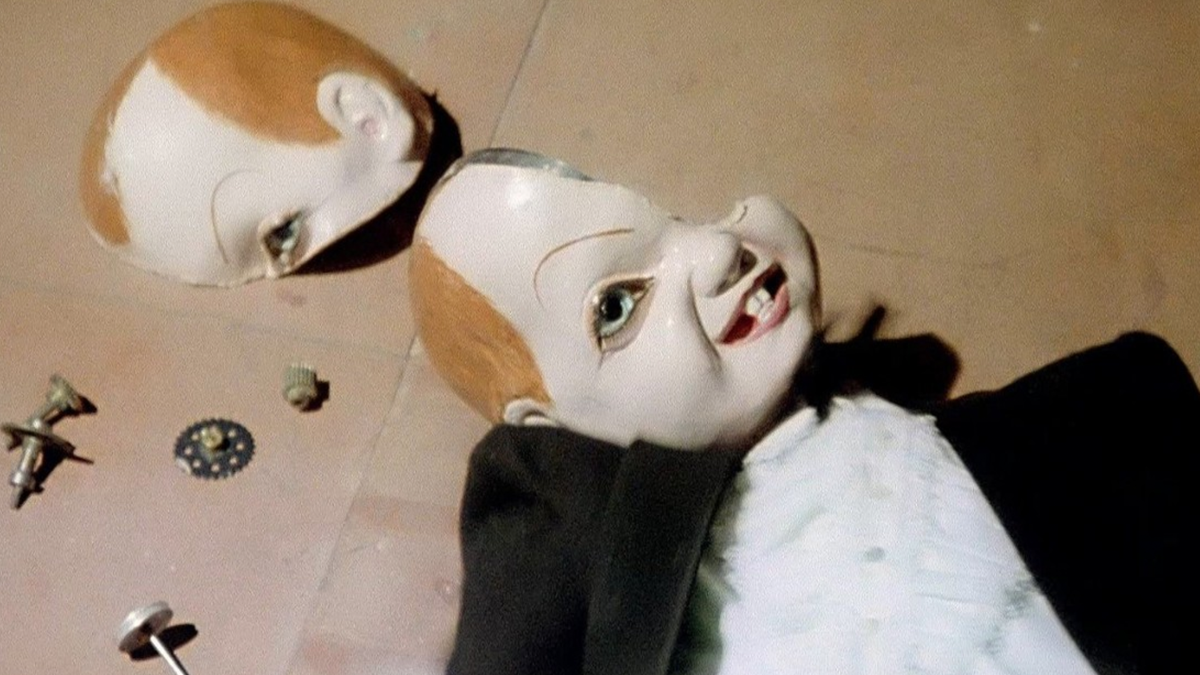 Dario Argento had just made his first flop, 1973’s comedy film Le Cinque Giornate (The Five Days.) The public proved that they were not willing to accept him outside of the Giallo genre. In response, in 1975 he came roaring back onto the scene with one of his best Giallo films, Profondo Rosso aka Deep Red. This was not just another Giallo film, but the best Giallo film he had made since The Bird with The Crystal Plumage. This puts it firmly in a contender spot for one of the best Giallo films period.

The beginning of the film shows a brutal murder in silhouette on a wall, a knife hitting the floor in the foreground, and a leg in a white stocking as it comes into the frame. It cuts away immediately. The next shot, at the Congresso di Parasicologia, during a conference of psychics inside of an opera house, a woman named Helga displays her amazing telekinetic powers. She can not see the future, but she can see what is happening at that exact moment and know and feel the thoughts of those around her. In the crowd she senses the presence of a murderer who she claims has killed and will kill again. She also thinks of a little child singing a song. The killer vacates the main room and heads to the bathroom where he puts on his gloves. Returning to the main room of the opera, he stalks his prey. At her place of residence, Helga talks on the phone when she hears a knock. Approaching the door she realizes that it is the killer. The killer proceeds to murder her with hatchet blows. Meanwhile, on the street a pianist, Marcus Daly, (David Hennings) talks to a drunken pianist named Carter on the rocks who is sitting on the street outside of a bar called The Bar. While they converse, he looks up in time to see the final death blow as Helga’s head is smashed through the glass window. He runs to her apartment in time to see the suspected killer move down the street in a brown rain coat. He explains to the police that he lived above her and knew her name, but didn’t know her well. He also feels that something is missing from the crime scene, possibly a painting. He knows that he saw something. A photographer named Gianna Brezzi (Daria Nicolodi) at the scene of the crime snaps a photo of him. They then meet up at the funeral, despite the fact that she runs his photo on the front page of the news. Compelled to figure out the murder, he begins investigating with her assistance.

This is a true return to form for Argento. While I enjoyed The Cat O’ Nine Tails, this is Argento firing on all cylinders and getting back into the territory that made him so famous with The Bird With Crystal Plumage. Aided by cinematographer Luigi Kuveiller, Argento achieves some of his most striking images, including opening scenes that take place in an opera and some great first person filming during scenes from the perspective of the killer (a trademark of Argento.) Argento also employed for the first time the musical group, The Goblins alongside composer Giorgio Gaslini, who had done compositions for films like La Notte. The collaboration between The Goblins and Argento would come to a crescendo in the next Argento film, Suspiria, but their contribution to Deep Red is profound. The music makes this film a more effective film in every way imaginable.

The plot for the film is a bit convoluted, so be ready for that. This is not to say that the plot is bad, there is just a lot of it to take in. The main actor, David Hemmings of Blow-Up fame, does a pretty decent job in the film. Hemmings is not the most enigmatic actor to me, but he held his own for the most part here.

This is a film where the sum truly is better than the parts. Despite some obstacles in the script, and a leading man that is an unconventional choice, the film works marvelously well. If you like the Giallo genre, this should move to the top of your must-see list. That way you can debate with me what is actually Argento’s best film!

Arrow Video have provided an absolutely fantastic looking transfer of the film using an MPEG-4 AVC codec of a brand new 4K restoration from the original camera negatives occasionally using interpositives to fill in any frames that were missing. The transfer is one of the very best efforts by Arrow Video and the image looks fantastic, retaining the grain and demonstrating great amounts of detail. This is one of Argento’s most intricately filmed and best looking movies. I was wowed by the visual presentation here and fans will want to purchase this one even just based on how great this video transfer turned out.

For the Director’s Cut, Arrow Video has provided an Italian LPCM Mono Track, an Italian 5.1 DTS-HD MA track, and an English/Italian Mono Hybrid track. For the Export Version they have only provided the English track (more than likely because no Italian track exists for that version.) On the Director’s Cut, I listened to the film intermittently in both languages and found that they both held up well. The reason that the English track on the Director’s Cut is a hybrid is due to certain scenes never having been dubbed in English. Arrow have provided every available option for the viewer and they all. My recommendation would be the 5.1 Italian DTS-HD MA track, but the mono version sounds great also. Fans will be thrilled the first second of Goblin’s theme song. Dialogue is crisp. This is well done work.

Deep Red is Argento at his most satisfying. After Argento’s first flop, he had something to prove. He crafted one of his very best films that many debate is his best film. I loved it so much, but it is pretty hard to top The Bird With Crystal Plumage. I have been debating all day which I prefer more, which is a great sign. For now, I would probably put them in a tie to be decided the next time I watch them. For me, Suspiria will always be my personal favorite, but I am so glad to own this film in a beautiful new 4K transfer. This last year has been a great year for Argento fans and Giallo fans in general, and this is the icing on the cake. The supplementary materials are great and the movie looks amazing. I highly recommend checking this film out if you have even the slightest interest in the genre. Argento fans should jump at getting this limited edition release. Highly recommended.