The vast array of films out there are a double edged sword.  On one hand, it’s nice to have such a diverse group of films and on the other hand, even with this diversity I sometimes feel like I’ve seen everything before.  And what does it mean when WWE (World Wrestling Entertainment…I think) Studios starts producing mainstream Hollywood films?  This is has got to be one of the seven signs of the apocalypse.  Nevertheless I do applaud screenwriters and filmmakers alike as, after all, it’s hard to come up with something uniquely original in this day and age.  Wasn’t it said that there are no original stories out there since Shakespeare already covered them?  That aside, we have Dead Man Down, a story about one thing and one thing only – revenge.  We once again see Collin Farrell, who has made a comeback recently with films like Total Recall, Fright Night and Seven Psychopaths. Dark, corporate and melancholy, the film isn’t a pick me up by any stretch of the imagination – let’s see what it has to offer.

Victor (Colin Farrell) has lost his family at the hands of Alphonse (Terrence Howard), a ruthless gang lord.  Victor has managed to infiltrate Alphonses’s inner circle and even saves his life in a gun fight.  Alphonse has been receiving bits and pieces of a puzzle that has him worried and, more to the point, puzzled.  One of Alphonse’s men, Darcy (Dominic Cooper) decides to investigate these mysterious threats and is starting to make some headway.  Switching gears back to Victor, his neighbor has video footage of him killing a man and uses this information to get him to kill a man who disfigured her in a drunk driving accident.  Of course, everything comes together otherwise we wouldn’t have a movie, right?  Does Victor get his revenge on Alphonse?  Does Darcy finally connect the dots?

There are some pretty interesting plot points in Dead Man Down, but ultimately it’s a series of near misses.  Granted the cast is top notch with Farrell doing a good job, the always reliable Terrence Howard and good turns by Dominic Cooper and Noomi Rapace (the original “Girl with the Dragon Tattoo”). And I will say that this is the best movie that WWE Studios has ever put out.  Then again the bar wasn’t exactly set too terribly high. What the filmmakers want us to think is mysterious and brooding, I found a bit monotonous and repetitive.  Then again, that’s just me.  Oddly enough, when I looked up the film in IMDB, one of the movies that came up in the same genre was Lucky Number Slevin –  now that was a fun movie to watch and I’d recommend that one over this one any day of the week.

Shown in a very wide 2.40:1 aspect ratio, the AVC HD image is crystal clear and razor sharp.  This is probably one of the darkest movies I’ve seen in a while with the corporate grey and blacks prevailing.  Having said that, the contrast and black levels work well off one another, though there were a few instances in which the image was a bit inconsistent (some “movement” in the shadows if you will).  Farrell’s jet black hair contrasted with stark white skin and perpetual five o’clock shadow make for an interesting look.  The scars on Noomi Rapace’s character even have a fine texture to show us that detail isn’t an issue.  Consistent with a new to Blu-ray film, Dead Man Down looks very good, but comes up just a bit short of perfection.

The DTS HD Master Audio soundtrack starts off with a literal bang as an initial gun fight really starts things rocking and rolling.  Surrounds are highly engaged the LFE have a good pace throughout the film and dialogue has a more naturalistic approach.  Though the rest of the film really can’t keep pace with the opening sequence, this soundtrack is about as naturalistic as they come.  There’s an odd car “chase” (if one car can chase itself, that is) with the tires squealing and whatnot.  Like the video quality for this film, it’s a good but not great, effort.

We don’t get a lot of extras here, namely just a trio of “been there, done that” featurettes.  We begin with “Revenge and Redemption: Crafting Dead Man Down” in which the cast and crew speak of the film, it’s roots and what led them to take part in the movie.  “Revenge Technique: The Cinematography” has the crew reflect on the physical look and feel of the film and shooting locations.  “Staging the Action: The Firefights” gives us some insight into some of the key action scenes shown.  Also included is a DVD of the film as well as an UltraViolet copy. 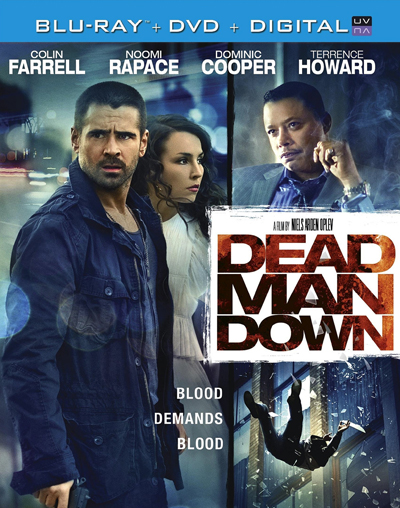