Film about film. This is a genre that I seem to never tire of watching in iteration after iteration. Whether it is Mamet’s State and Main, Fellini’s 8 1/2, or Wag the Dog, it is always a blast to try to figure out how auteurs create films. That is why I was so excited that Criterion was finally bringing Truffaut’s Day for Night to Blu-ray.

Day For Night was a bit of a comeback for Truffaut. Truffaut had already rocked the world of cinema with his first three films (The 400 Blows, Jules et Jim, Shoot the Piano Player) to the point of never needing to prove himself again, but his last three films had been a bit of a bust. With renewed vigor Truffaut decided to make a film about his favorite subject: cinema. Truffaut was easily one of the best people to direct a film on the subject. On top of being a fantastic director he was also one of the most renowned critics of film, having been part of the Cahiers du Cinema (along with Godard) and having published several books on the subject. The results of his attempt at showing this world are easily on par with the best examples listed above.

The film follows the cast and crew of a French movie called Meet Pamela. The film within the film is a melodrama and small scenes of it are shown throughout the film, but the film itself follows the eccentric crew of misfits and craftsmen that work on the film. Jean-Pierre Leaud  plays Alphonse, a young actor that is having issues with his girlfriend that are affecting his performance as the young lead. Jacqueline Bisset plays the beautiful American actress that is brought into the cast to play the romantic lead in the film. Jean-Pierre Aumont plays the old Hollywood heartthrob that plays the older lead in the film, but in reality is a homosexual. Valentina Cortese plays another old Hollywood actress that is struggling with her lines and her emotions through drinking. Nathalie Baye (in one of her first roles) plays Joelle the script girl. Francois Truffaut plays Ferrand, the director of the motley crew. As the movie progresses everybody seems to be sleeping around and emotionally unstable while the director has dreams of his childhood.

The film is a lot of fun to watch and the writing is concise and fast paced. The effect of Robert Altman’s M.A.S.H. seemed evident from some of the overlapping dialogue, but Truffaut still puts his own aesthetic across. This movie in some ways seems to be a precursor of comedies like 30 Rock or The Larry Sanders Show. The actors do a terrific job in their respective roles, leaving very little to be desired. I enjoyed the film a lot, and look forward to watching it again soon. I feel confident that you will enjoy it too!

This is a mostly excellent transfer from Criterion. The film retains a good amount of detail and looks absolutely stunning for the most part. That said, there are some times where film stock seems to change temporarily and it can be a bit jarring. Overall, I think the film looks great, but it has some of the same problems that Purple Noon had in its transfer. Knowing Criterion’s predilection for perfection, I assume that these little bumps in the road were unavoidable, but they are worth noting. Aside from these tiny issues the film looks the best that it can possibly look, with some scenes in particular looking breathtaking. Cinematography was done by Pierre-William Glenn who also did a terrific job on the cinematography on State of Siege by Costas-Gavras.

Similar to the video, this French mono track is very high quality. There is nothing bad to report whatsoever in this department although dynamic range is limited as you would expect. Dialogue is incredibly clear and crisp and Georges Delerue’s score sounds wonderful. I can not think of anything but praise for the excellent treatment of this track. Audiophiles are going to love this one!

2. Cannes Interview – Francois Truffaut is interviewed by Raymond Tortora at the Cannes Film Festival on May 20, 1973. In French, with optional English subtitles. (2 min, 1080p).

Day for Night is not quite as powerful as some of Truffaut’s earliest work, but it is still a great entry in his canon. As somebody interested in film making, this film is a must-own for me personally. If you are a cinema lover, then I recommend purchasing it for yourself. Criterion have provided an excellent transfer for the audio and a near perfect video transfer. They have provided a ton of supplements as well. I would move this one up to the top of your list of must-own Criterions if you have not already purchased it.

Note: Do not watch the kogonada visual essay unless you want The Soft Skin spoiled. 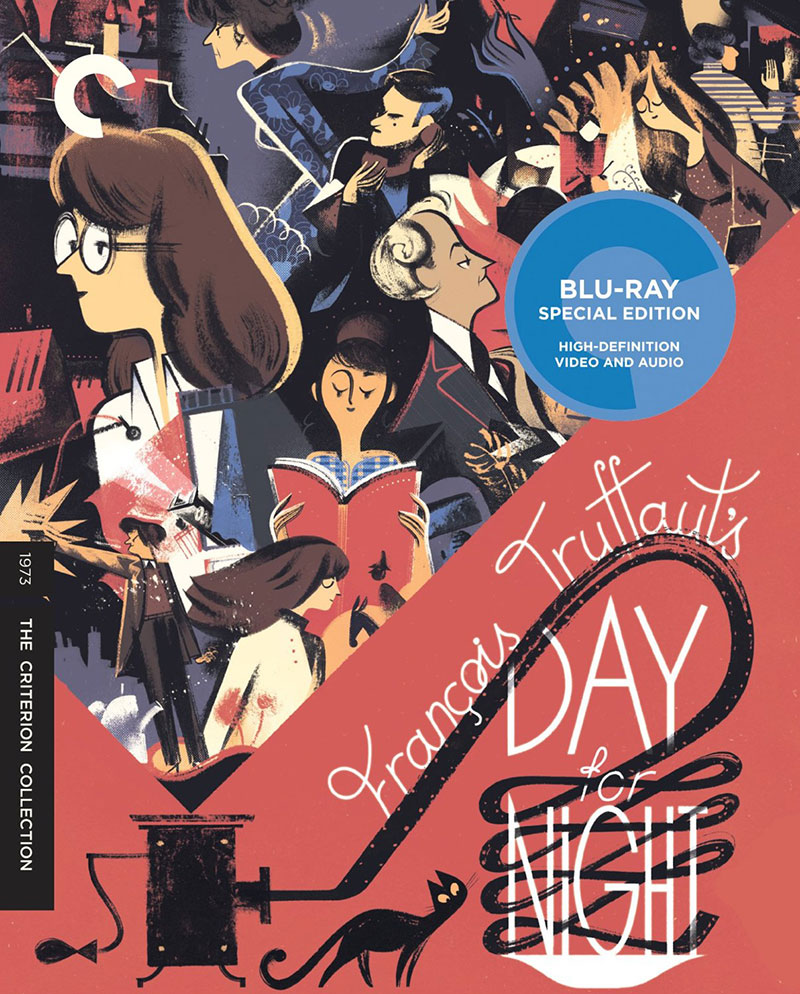