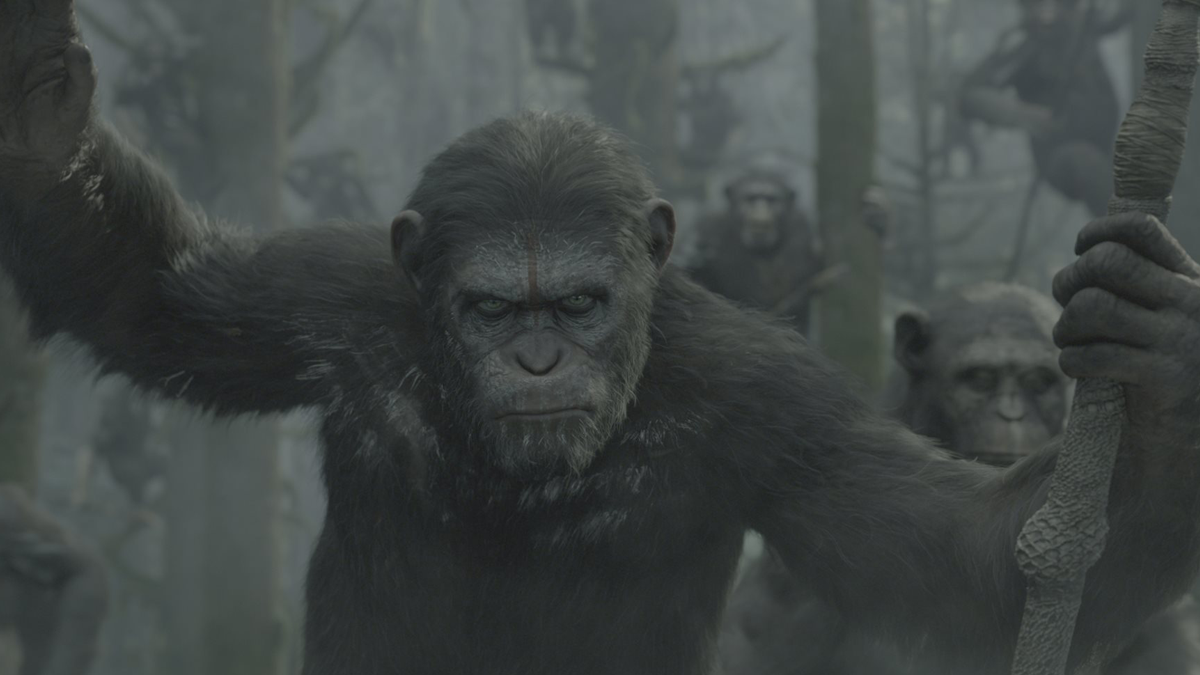 Keeping with the trend of the franchise, we’ve got a new installment (though fans of the films will know that this really is nothing “new”). The stars have changed (from James Franco to Jason Clarke), but the locale hasn’t – San Francisco. And I’m sure it’s not just me, but is the thought of a 6 foot tall talking monkey perhaps one of the scariest things you could ever imagine? Then again, at the most primal level (pun fully intended), I suppose most of us are essentially 6 foot tall talking monkeys in our own right. Picture that. Attempted humor aside, we (and the primates) are progressing and evolving. The success of Rise of the Planet of the Apes has made way for this new installment and once again pits man versus the (now much smarter) apes. Is the Golden Gate Bridge now a giant jungle gym? Say it ain’t so!

Rise of the Planet of the Apes finds us a decade after the events of its predecessor. A simian virus has wipes out most of mankind and only a handful of the human race has survived.  The apes, conversely, have managed to prosper. Let by Caesar (Andy Serkis), they have formed a language and are able to communicate. They’ve also created their own society in the forest outside San Francisco. In fact, the apes don’t even know humans exist until a group stumble upon their domain. Malcolm (Jason Clarke), tries to communicate the need to repair a nearby dam so the other humans can have electricity and therefore live. Caesar reluctantly agrees allowing a CDC scientist (Keri Russell) to help. Naturally not all the surviving humans are good and we meet Dreyfus (Gary Oldman), the leader of the camp and who blames the apes for the virus. The stage is set and Malcolm and Caesar try to keep the peace in light of the brewing situation.

The film managed to do what few others did and that was to improve upon its predecessor. Granted, the different cast might have had something to do with it, but with good writing, acting and a genuine intriguing plot – there was clearly more to this one than met the eye. Somewhat political in nature (it doesn’t take a rocket scientist to figure out the analogies here), this set the stage for the next installment: War for the Planet of the Apes (and this is the reason we now have 4K versions of the first two films). A top notch cast, a good story and amazing special effects go a long way in a film’s success, so it’s with intrigue that I once again sat down to view this film. Fans of the franchise will get a kick out of this installment.

Like its predecessor, the Blu-ray version of the movie looks positively astonishing. But the point of this set is to showcase these films in the new 4K format and, as such, we’ll focus on that. The movie was shot digitally unlike Rise of the Planet of the Apes, which used film. As such, there’s a clearer, more defined sharpness to the film and its look and feel. the CGI effects don’t seem as “plasticky” as before and though it never looked bad, this one seems much more suited to the format. The color spectrum is embraced, the black levels, contrast and overall look really pay off. It’s a fine-looking film that looks good on Ultra HD.

Unfortunately, Fox has once again missed the boat with this audio track. There could have been a Dolby Atmos or DTS X mix added to this (and for what you pay, it should be expected), but the 4K version simply possesses the same DTS HD Master Audio mix that was present on the Blu-ray. Don’t get me wrong, it’s not bad by any means, but it’s the principle of the matter and nothing more. Vocals are rich and deep, Caesar’s commanding voice resonates through the center channel. Directional effects are used with great impact and the LFE have more than a few areas to shine. It’s a stunning mix and the lack of a next generation audio mix aside, will more than satisfy.

Once again, the audio commentary is the only feature that’s present on the Ultra HD disc. The remainder of the supplements are found on the included Blu-ray.

More than just a sequel, Dawn of the Planet of the Apes might be the lynchpin for the future of the franchise. It stood on its own and in many ways was superior to its predecessor. The Ultra HD, like Rise…Apes, is just an excuse to sell some more of what’s already been sold. Though the picture is a bit of an improvement, everything else is the same as the initial Blu-ray release. Purchase only if you want to build a 4K library and don’t own this one.