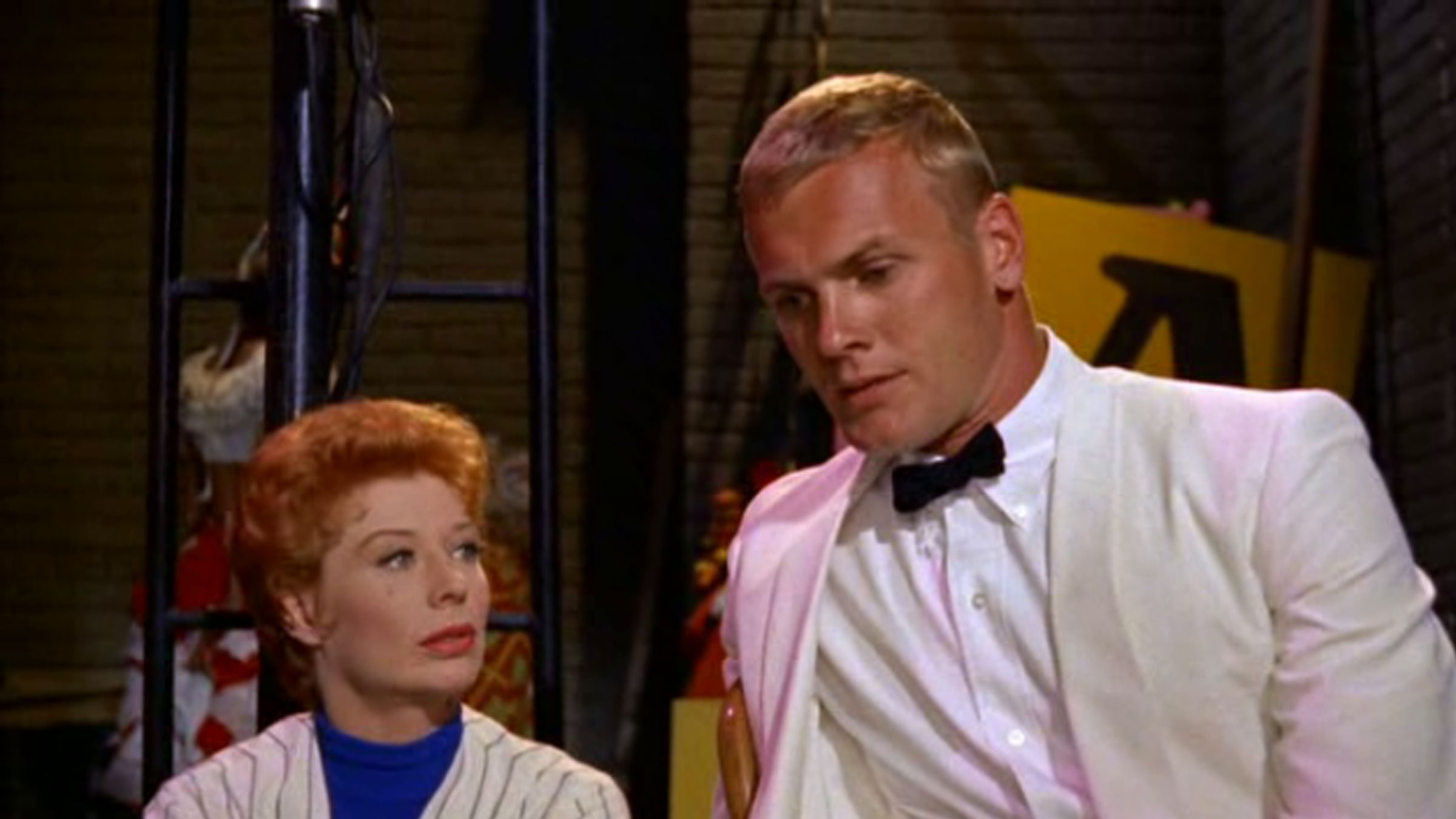 The months are March until October and the sport of baseball is at its stride. Everyone’s a fan and roots for their favorite team. The sport has been called the great American pastime and with this pastime George Abbott and Stanley Donen had gotten together on the big stage to make a musical of what would happen if one individual got a chance to be a hero for a team along with some mephistophelian assistance along the way. And one such choreographer named Bob Fosse joined along this fun ride of the major league, the struggling team and going over the hump to defeat those Damn Yankees.

It’s the late 1950’s and Joe is a big Washington Senators fan but can’t stand to see his team end up in last place and his wife can’t stand it. He begs for one long ball hitter and would sell his soul to find one. With that wish, a gentleman by the name of Applegate (Ray Walston) appears before him proposing a deal that would grant that wish and that Joe would be that hero. Although this means time away from his wife, it does give Joe a chance to fulfill a dream he abandoned some time ago. He now has a new name of Joe Hardy (Tab Hunter), a more youthful appearance and a hitting style the Senators much desperately need. With the sudden success of the team, there are complications in the way, one in the name of a sexy lady named Lola (Gwen Verdon) who attempts to lure Joe away from the homesickness of being away from his wife. Joe maybe trying to get the last laugh but in this soul selling world, it isn’t easy.

Damn Yankees was a hit Broadway musical and it’s a film with some catchy tunes. Who would imagine baseball players dancing, uniform and all, and singing for a team that’s gotta have heart no matter what obstacles come in their way. Tab Hunter comes off decent as Joe being the young guy with a lot of hits to offer but gets tongue tied when the real questions about him become too much. Ray Walston brings that straight faced con in as Applegate, the man who wishes to have Joe for his own but forgets about one or two more things.

One of the big standouts is Gwen Verdon as the tempestuous Lola who wants Joe and gets a liking to Joe along the way that can’t fall under the puppet strings of Applegate. Get a close look and you’ll notice Bob Fosse in a small cameo appearance during one of the dance numbers at Joe’s celebration. Even the manager of the team can’t help but call him Fosse.

We’re going all in with the baseball metaphors, so get ready…Warner Archive is consistently up there with Criterion and Arrow, two studios that take a lot of pride and passion when it comes to their releases. Damn Yankees has undergone a new 4K restoration that was sourced from some of the preserved reels. The result is, as one would expect, stunning. The bold and bright colors of these late 50’s films simply leap off the screen. Detail has been improved and has breathed new life into the movie’s look and feel. For a film of this age, for it to look this good on disc the only thing we can say is that Warner Archive has knocked this one out of the park.

We get somewhat of an odd audio mix in that it mimic’s the DVD’s Dolby Digital 2.0 mono mix, though this one has gotten the DTS Master treatment. It does have a bit of fifties amplify where you can tell how high the sound can go and have still have some audio limitations. For the most part it’s a fine track with a good surround occasionally leaving the majority of the sound for the center channels. The score and the voices come out clear without any distortion making for a good track even for a film from the fifties.

It might have taken 60 years after this film came out, but the Washington Senators actually did win the World Series. I realize that the point has probably been missed, but I was there. Damn Yankees is fun. And it’s fun to watch. Warner Archive’s new video offering is second to none and what better way to celebrate Hollywood musicals and America’s pastime in one sitting? In short: it’s good. It’s damn good.