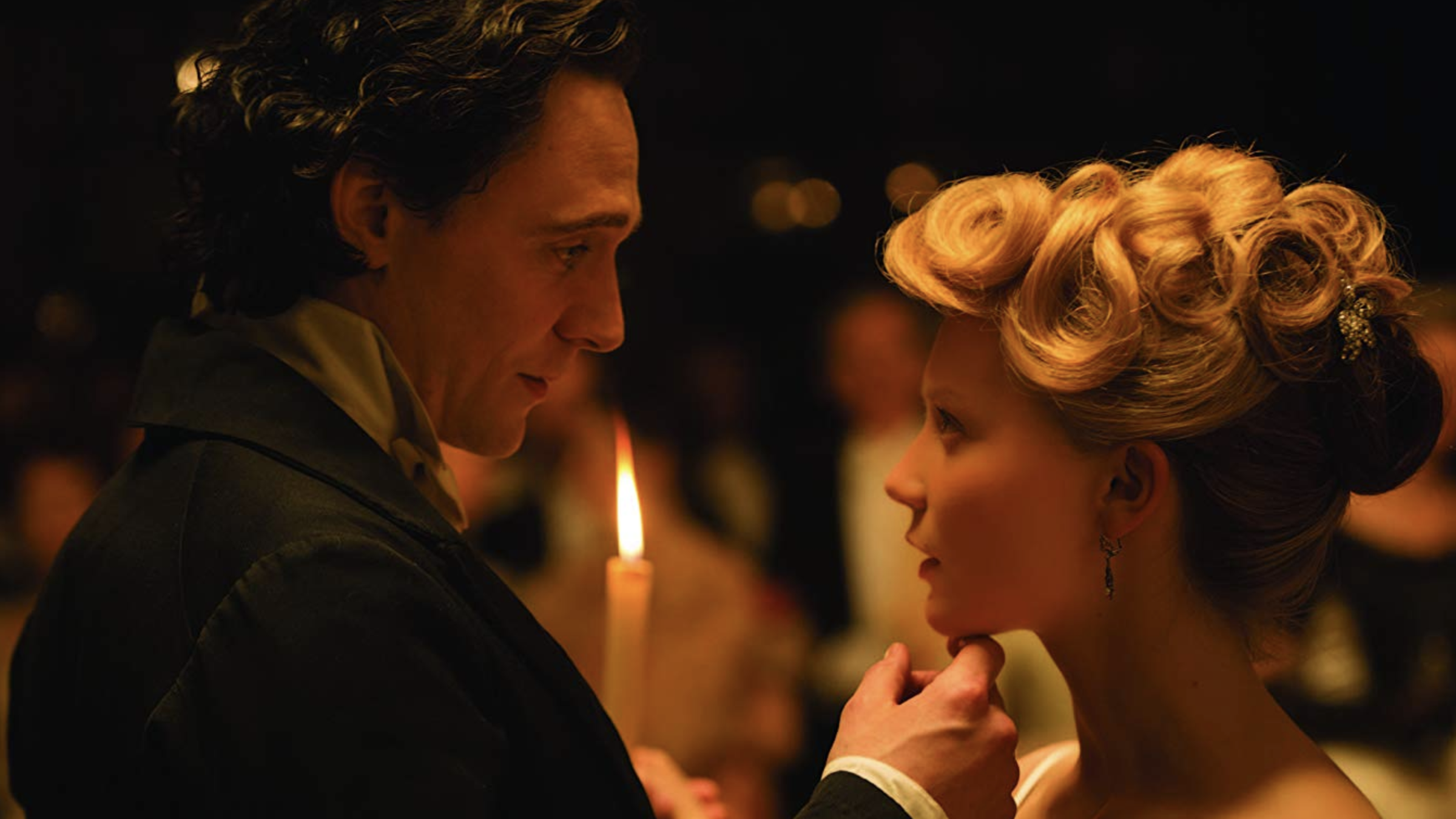 Guillermo Del Toro is one of the most interesting filmmakers of the last thirty years to me. Del Toro has made some films that I didn’t love (Cronos, Blade II,) some I thought were good but not great (Pacific Rim,)  and a couple that I love (Pan’s Labyrinth, The Devil’s Backbone.) I also enjoyed his Hellboy films. Sadly, I have not seen The Shape of Water yet, but it is on my to-do list. This week I finally tackled a film that I had purchased three years earlier and had not gotten around to watching – Crimson Peak. Originally released by Universal Studios in 2015, Arrow Video has released a deluxe edition of the film with new special features and a new encode on the video transfer. It seemed like a great time to finally check the film out and to compare the two releases.

The film takes place in 1901, in Buffalo, New York. The plot of the film revolves around aspiring author and single debutante Edith Cushing (Mia Wasikowska.) Edith likes to write ghost stories. As a child, her mother had died from an illness but had come back to her as a ghost one night. The ghost had warned her to “Beware of Crimson Peak.” Having no idea what this meant, Edith continued to live her life with her affluent father (Jim Beaver) who worked his way into a small fortune in the steel trade. Edith has an admirer named Dr. Alan McMichael (Charlie Hunnam)- an ophthalmologist with a passion for science. Edith considers Alan a friend and does not consider him romantically. When Baronet Thomas Sharpe (Tom Hiddleston) arrives with his sister, Lucille (Jessica Chastain,) the social circles see in Thomas a potential suitor. When Edith and Thomas strike up a friendly conversation, they soon find that they have a good amount in common. He enjoys her writing and encourages her. At the same time, Thomas attempts to receive funding for an excavation machine which would render his property, which sits on red clay mine in England, a much more valuable property. All of these actions draw the ire of Edith’s father, Carter. Carter seeks to have the courtship destroyed and uses an investigator to look into the Sharpe family. What he finds out would wreck any chance of Edith and Thomas. Circumstances lead to Edith residing with Thomas and Lucille in his property called Allersdale Hall – or Crimson Peak.

When I was in college my major was English Literature. This afforded me the opportunity to take all sorts of niche genre classes. One such course was Caribbean Gothic Literature. Given that I always signed up during “drop-add” week to avoid a couple days of class, this was one of the remaining English courses that was available one semester. Having no idea what to expect, I took the course. It ended up being one of the most interesting courses that I took. We studied The Monk, Jane Eyre, Wide Sargasso Sea, and A High Wind in Jamaica if you are curious about the highlights of the course. This course was of great benefit to me as I watched Del Toro’s Crimson Peak. The film borrows elements from Jane Eyre, Wuthering Heights, and The Turning of the Screw to produce essentially a very traditional gothic story. The film is basically an homage to an entire genre. Watching the film I had no trouble determining what would occur based on the type of literature it emulated. This is the film’s greatest strength and greatest weakness. It gave me pleasure to see Del Toro paying his respects to a type of literature that is not given much screen time, but the film also suffered from a streak of predictability. Anybody who has read any Gothic romance would be able to figure out the essentials of the plot fairly quickly.

What sets the film apart is Del Toro’s craft and ability. The mansion that Del Toro and his crew designed for the film is absolutely beautiful and amazing. The film easily has some of the best art and production designs that I have ever seen. Once the film migrates to Allersdale, it becomes a joy to look at what Del Toro and his team dreamed up. Very few filmmakers are as imaginative as Del Toro and this film has some of his most amazing machinations. His production design crew have a lot to be proud of.

The film has a strong cast. Mia Wasikowska does a fine job in the film. She handles her role well and carries the film with her reactions. Tom Hiddleston turns in one of his best performances with a good amount of charm. Charlie Hunnam is good but is not given much to work with. His character is not that well developed. Jessica Chastain – I love her in most things but this film has her using a British accent that was never quite fully convincing to me. Her acting in the film is good and I eventually ignored that aspect, but at first it threw me off a little bit. This movie is a melodrama and at times that serves the worst instincts of the actors but is not uncommon for this type of film.

One of the principal failings of Crimson Peak was the way in which the film was marketed. I can imagine the crowds of theater goers that expected a traditional horror film and received a Gothic romance and a ghost story were surprised and in some cases dismayed. This film was never meant to be truly frightening despite having some intense moments. If you have not yet seen the film, please adjust your expectations accordingly so you can enjoy the film more fully.

Crimson Peak would rank high in the films that Del Toro has made if I was asked to name my favorites by him. I still prefer Pan’s Labyrinth and The Devil’s Backbone, but I couldn’t help but enjoy watching this film. It is not a perfect film. Del Toro should have put some more thought into the dialogue because there is some clunky dialogue that takes away from the film. The film is predictable at times and is a true melodrama which will obviously turn some viewers off. That said, the film is also beautifully done with some of the most visually pleasing work that Del Toro has ever put on film. I would definitely recommend checking it out and forming your own opinion.

When approaching the video for this release my first step was to contact Arrow Video to see if there were any significant changes from the Universal Pictures release and the Arrow Release. They let me know that this release utilized a different encode. I decided to compare the two transfers. To do so I watched a few scenes on my Ultra HD television to compare. The new image on the Arrow release is more detailed and pleasing to the eye than the previous release, which also looked good. This is a firm improvement and for purists it will be the preferred way to view the film. As I mentioned above, this film is gorgeously shot and is visually pretty astounding. I would be crazy to not give the video portion a perfect score.

The DTS-HD Master Audio 7.1 track to the film is great. It is the exact same track as the Universal Blu-Ray release that fellow reviewer Matt Brighton discussed. I share his sentiments. This is a well-done track that uses directionality, LFE, and its beautiful score pretty perfectly. It does not get much better than this as far as reference audio goes.

The following supplements are specific to this Blu-Ray release:

The following supplements were ported over from the previous Blu-Ray release:

Crimson Peak is essentially a flawed masterpiece. It is such a beautiful film that I can move past the problems with some clunky dialogue and predictability. Fans of Gothic romance will be thrilled by the film. It is one of the most beautifully realized and imaginative films that Del Toro has achieved. Arrow Video have provided an amazing array of supplements. The supplements last for over four hours if you factor in the audio commentary track. The technical merits of the film are excellent. Arrow has made this the defining release of the film unless we ever get an UHD copy. That said, the previous Universal release had good technical merits and supplements so people with that disc will be put in the position of figuring out if they should double-dip. The video presentation uses a different encode and the results when put onto an ultra high definition television are solid. For true fans of the film, this is the best version to own.