It’s sad to see a film with such a talented cast that includes Kevin Costner, Gary Oldman and Tommy Lee Jones, to name a few, turn out to be such a dud. But that’s just what we get with Criminal. A film that starts with an intriguing premise, but is so poorly executed that it’ll likely have many viewers either dozing off or fast forwarding to the end. Kevin Costner plays a con named Jericho Stewart who’s implanted with the memories of a CIA agent who was recently killed. The hope is that the memories will reveal details about the secret that will stop a nuclear war. I was reminded a bit of Face/Off, but with the obvious tweaks in the plot. The difference here is there aren’t two characters basically trading lives. Since one is deceased, the reliance on the memory is the driving point. Also, I quite enjoyed Face/Off. I can’t say the same for this.

It’s hard to pinpoint exactly where Criminal lost me, but the pacing is sluggish and it became hard to care about much of anything going on in the film. It doesn’t help that our lead hero doesn’t bring much to the table. Costner is certainly capable, and he’s able to display some macho skills, but too often we see him stumbling around. Of course, this is normal for someone who’s just had brain surgery, but we get many, many scenes of this. It doesn’t help that the action scenes fail to bring any form of excitement to the table. I mentioned Face/Off and that’s one thing John Woo had was style. He knew how to stage exciting action sequences. Everyone else just looks bored here. Gary Oldman isn’t given much to do beyond yelling at Jericho to remember things while Tommy Lee Jones is wasted as well. With a tighter screenplay and sharper direction, we might’ve had something here. As it stands, this is simply a dud that should be avoided.

With the new 4K format taking over, let’s not forget that your standard Blu-Ray discs still look quite nice. I don’t think the drastic difference between DVDs and Blu-Rays will ever be seen with HD either. This disc still looks quite nice. Details are sharp throughout and the print is pristine. Costner has a surgical scar on the back of his head throughout most of the film that shows nice detail. It’s not exactly a pretty sight, but you get the idea. The image here is AVC encoded with a 2.39:1 ratio.

The DTS HD track also gets the job done. This isn’t an endless action film, but there’s still several moments that display strong range. Vocals are always clear and on point as well. It might be wise to have the remote handy as you will likely adjust the volume on a few occasions. All in all, this track satisfies.

Despite an intriguing premise, Criminal fails to do much with it. You’ll have a hard time caring about much of anything here. Performances are only so-so, and the pacing sluggish. Skip it. 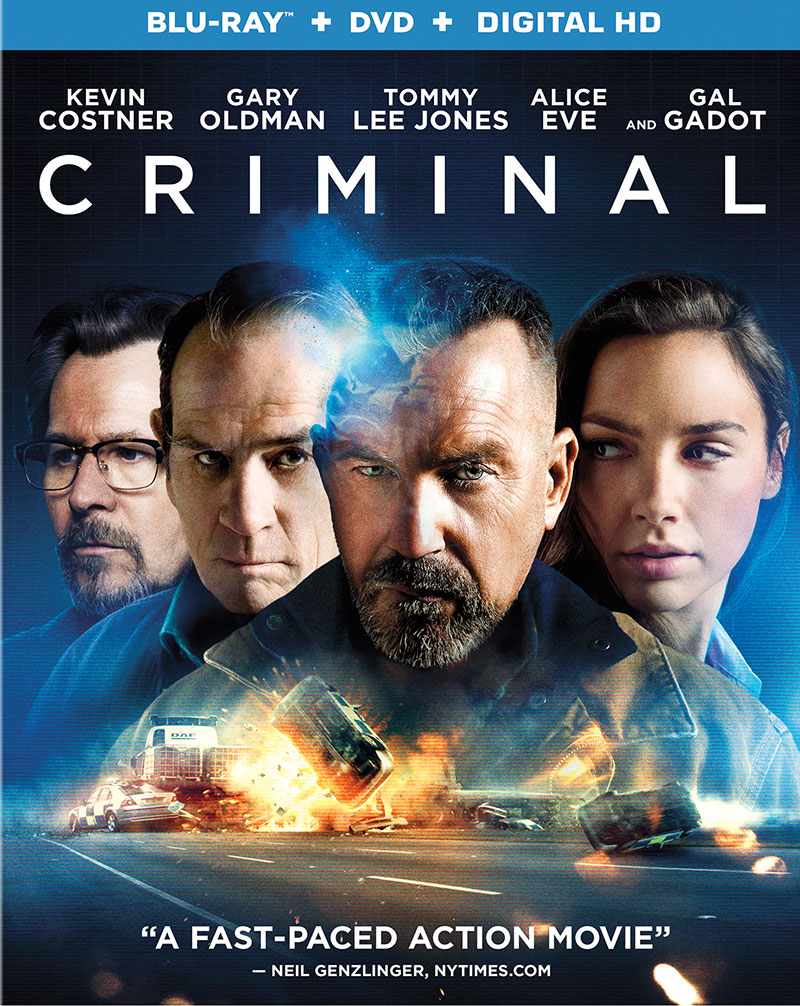