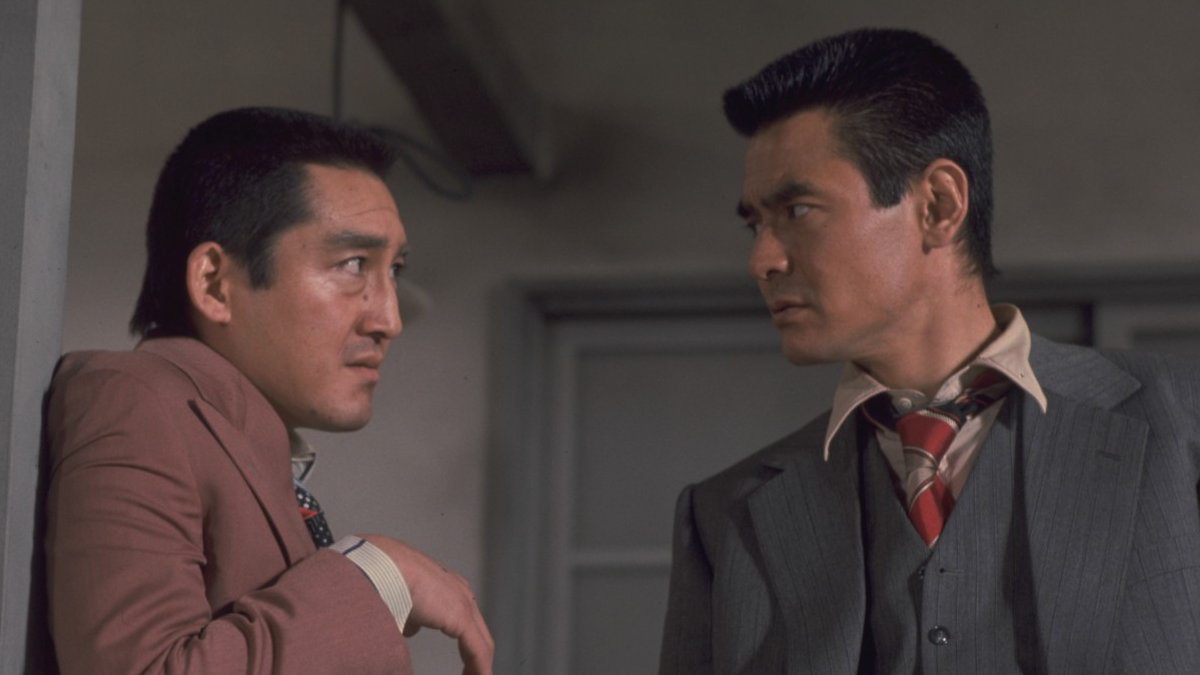 Almost a year ago I sat down and watched a box set of films by legendary Japanese filmmaker Kinji Fukusaku. The box set was a collection of his Battles Without Honor and Humanity films that Arrow Video had released. It was love at first sight. If you have not seen those films, I highly recommend purchasing the entire box set. They are truly fantastic. Fukasaku was an incredibly energetic director and those gangster films are as kinetic and sprawling as one is likely to see. The most recently made film that I have seen in the same style of direction would be the Italian film Gomorrah, but it is so depressing and real that it bears lacks the humor of the madcap yakuza films by Fukasaku. I had been a fan of Fukasaku’s Battle Royale since I had first purchased a bootleg copy in my teens, but these yakuza films were an absolute revelation to me. They still rank as some of my favorite films that Arrow Video have put out, which is a big compliment given their excellent track record. I was extremely pleased to see that they are now releasing another yakuza film, Cops Vs. Thugs, and later down the line we will be getting the New Battles Without Honor and Humanity films. I eagerly put in my copy of Cops Vs. Thugs this week.

The film begins with officer Kuno (Bunta Sugawara) stopping a group of thugs on the way to a raid of a rival yakuza gang. He takes the men one by one and insults each one for their stupidity, but given that they are going to be taking out some gang members he could care less about, he sends them on their way. This introduction immediately clues in the audience that Kuno has his own special brand of justice. The city itself that Kuno is supposed to protect is facing a crisis. There are two rival yakuza clans that are fighting each other. There is a group headed by Kenada, who is also a politician. There is another group headed by Ken Hirotani in the absence of Boss Ohara who has been in prison. With Boss Ohara about to be released from prison, Ken begins a power play. While this is going on, Kuno and a few of the other officers actually supply information to Hirotani and his men. Kuno had actually six years earlier befriended Hirotani and decided to turn his head to the illegal actions caused by him. This becomes an issue as a new police chief is sent in from headquarters named Kaida.

This film is a lot of fun.While not quite as Earth-shattering as the BWHAH films, this is an incredibly well-constructed and enjoyable yakuza cops and robbers film. This film obviously is a good template for films like Infernal Affairs and The Departed years later. The acting – especially by Bunta Sugawara – is fantastic. It was great to see Bunta play a cop instead of a gangster. Kinji Fukasaku’s energy and humor is still present, but the film does have a little bit more sexually objectionable material than I remember seeing in his earlier films, so there is a little bit more to shock the average viewer. It is a lot of fun with a lot of familiar faces from his earlier films. The screenwriter is none other than Kazuo Kasahara who wrote the Battles films, so fans should feel right at home. It even features a score from Toshiaki Tsushima!

Fans of Fukasaku’s earlier films should be ecstatic that Arrow Video brought this movie to the states. I highly recommend checking this one out if you are a fan of the genre.

Arrow Video did a solid job on the transfer of the film using an MPEG 4 AVC codec of a new 2K restoration. The transfer looks great overall. Occasional scenes looked a bit soft, but this could easily just be the nature of some of the focus in the scene. Similar to the other films that Toei has licensed transfers of, this is probably the best that the film will ever look. People looking for perfection on these releases are probably overshooting what these films looked like originally. Personally, I thought the movie looked fantastic in Blu-Ray.

The audio treatment of Cops Vs. Thugs was very good. Being a LPCM 2.0 track, it can be expected that range is severely limited. That said, this track is still pretty boisterous. The score by Toshiaki Tsushima is very engaging and fits the film like a glove. I really can not think of any problems that come to mind with this track. Arrow dedicated good time to getting this release right.

Cops Vs. Thugs is a fantastic addition to the Arrow Video library. I am a huge fan of the Battles Without Honor and Humanity series, and this film brings back together all of the key players from that series for a fun film reminiscent of The Departed. Fans of Fukasaku’s other work should not hesitate to add this one to their collection. I can’t wait until the release of New Battles a Without Honor and Humanity!