For some odd reason I draw a parallel between the careers of Mark Wahlberg and Adam Sandler. I really don’t know why. No, Wahlberg didn’t make a movie about a golfer who thought he was a hockey player and Sandler hasn’t played a gun-toting thug. Maybe it’s because they started their movie careers around the same time (the mid 90’s)? I really don’t know, but feel that this is a good segue into my review. You see, the two actors are obviously as different as night and day, but one – Sandler, is one that I used to like and now really don’t care for. And as you might have guessed, Wahlberg is someone who I originally didn’t like (except in Boogie Nights

Wahlberg plays Chris Farraday, a one-time smuggler who has now seen the error of his ways and has gone legit. He’s married with two kids and runs his own business. Life is good. But his brother-in-law is young and reckless and when he dumps $700K of cocaine in the river, the drug dealer (Giovanni Ribisi) is none too pleased. Chris has to “come out of retirement” so to speak to make amends for this mistake, but this requires him heading down to Panama to do another deal. Briggs (Ribisi) is a psycho in every sense of the word and this debt is now solely on the shoulders of Chris. If Chris fails to deliver, not only will he never see his family again but Briggs will take out his wife (Kate Beckinsale) and kids as well. This, of course, begs the question…will he be able to pull it all off?

Contraband is a fairly-entertaining film with a solid cast, some good action scenes and a fairly predictable ending. To me it felt a lot like another Wahlberg movie, The Italian Job in which a well-choreographed heist hits a snag and there are consequences. Actually about halfway through, I was scanning my Blu-ray collection to see where that disc was as I had the inkling to watch that movie instead. Truthfully there’s nothing wrong with the film and as I mentioned, it’s entertaining. It sports a solid ensemble cast and I’ll admit that Giovanni Ribisi is one of my favorite actors to watch. It’s got all the elements: fight scenes, gun shots, car chase(s) and a menacing bad guy. There’s nothing truly original here, but then again I don’t think there was supposed to be. I could take it or leave it, but for me there are certainly other (better) Wahlberg films out there.

Contraband comes to Blu-ray in a stellar 2.40:1 AVC HD image that looks just as we would think – amazing. The film is a product of a major studio so we can expect it to look top notch and it does. The overall tone of the film is very dark. We don’t get any compression issues and black levels are very strong. Contrast looks good and while flesh tones look a bit on the over-saturated side, they’re still solid. Detail, as expected, looks great with some little minute things being readily evident. The film looks great, though we kind of knew that it would going in.

The included DTS HD Master Audio soundtrack is, again, something that we’d expected to sound good. And it does. By and large, most action/adventure films will sound good and have their fair share of “Wow” moments. As I mentioned above, the film has just about everything that we might expect and the audio is translated very well. We have bullet fire, car chases and everything in between. This not only lends to an above-average soundtrack, but one that’ll give your speakers a bit of a workout as well.

This Blu-ray features Universal’s standard faire when it comes to supplements. Universal is rather hit and miss when it comes to content, but for true fans of the film there’s more than enough to warrant a purchase. We start off with a Picture-in-picture feature that’s…interesting. It’s not mind-blowing, but rather just presents some information (that’s repeated in some of the other featurettes). There is a standalone audio commentary from director/producer Baltasar Kormakur as well as the co-producer Evan Hayes. Both seem to admire their work, but there are some spots in which it gets a bit slow. And, believe it or not, there’s a reference to The Deer Hunter. Odd. There are a dozen deleted scenes as well as the only included featurette “Under the Radar: The Making of Contraband” as we get some rather enthusiastic comments from the same duo that collaborated on the commentary track. We also get to see Kate Beckinsale wrapped in plastic and buried in concrete. Lastly we have “Reality Factor: The Stunts and Action of Contraband” this is pretty self-explanatory as we focus on the stunts of the film and the choreography that was included within the film. 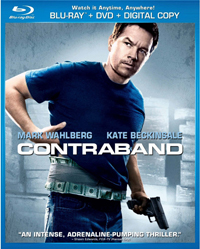