If you look at the marquee for this movie, it’s hard to believe that some of these folks are still working. I mean, if you’re in corporate America and have done well for yourself, odds are you retire at 60 and travel the world and play golf. This isn’t the case in Hollywood. I have to assume that some of the stars involved in this film either did it for the love of working with some of the others or they have an affinity for Taylor Hackford. Nevertheless, it’s rare that you’ll get Harvey Keitel, Robert DeNiro (reuniting from their Mean Streets days), Danny DeVito, Cloris Leachman and Charles Grodin (reuniting with Robert DeNiro from Midnight Run) in a movie together. Consider the talent of the actors and of DeNiro in general and you’ve got something. Or do you?

Jackie Burke (Robert DeNiro) is an aging stand-up comedian. He’d has fifteen minutes of fame after starring in a corny television show, but has long since retired from television. He now makes his living as a one act at comedy clubs. He’s what you would call an “angry comic”, often taking his rage out on the audience. Trying as he might to reinvent himself, his fans are only after his infamous catchphrase that he helped make popular. After a scuffle with an audience member, he’s sentenced to community service at a soup kitchen where he meets Harmony (Leslie Mann). She’s a fellow “rage-o-holic” whose father (Harvey Keitel) works in real estate. Jackie finds himself inspired by Harmony as she tries her best to help him reinvent himself.

While there’s technically nothing “wrong” with this film, it just didn’t seem to click. I have no idea if this is why Sony didn’t do a mass release of it or not, but the fact remains that the casting is pretty darn good. There’s no shortage of talent and it checks all the boxes. The film was written by comedian Jeff Ross who probably had someone else in mind for the lead. However given the immense talent of DeNiro and having played a comic in another film (The King of Comedy), it’s hard to argue with him in the role. This is tough one. On one hand it’s not a bad movie, on the other hand it’s easy to imagine what could have been. I guess we’ll just have to keep wondering.

Director Taylor Hackford has mainly shot his films in a wide format and this is no exception. The title was MOD (manufactured on demand), so even though it’s under the Sony label, it isn’t one of “the chosen.” That said, it’s pretty difficult to have a new to the format film and have it look bad. And this isn’t the shining example of the format, but it looks far from bad. Given that the average age of the cast is about 70 years old (consider that Robert DeNiro, Charles Grodin, Cloris Leachman and Harvey Keitel aren’t exactly “spring chickens”), the Blu-ray resolution doesn’t do them a lot of favors. By comparison the lovely Leslie Mann looks positively stunning (then again, when doesn’t she?). That said, the film has a very colorful vibe to it despite the subject matter. This is a hard one to find on Blu-ray, so I’m pleased to say that if you’re lucky enough – it’ll satisfy.

The included DTS HD Master Audio soundtrack won’t win any awards for its presentation. It’s mainly a dialogue-driven comedy that has a few sequences where the surrounds come into play. It might have well been a Dolby Digital mix and I’d have probably never known the difference. Still, vocals are clear, sharp and crisp and it leaves the viewer with a satisfied feeling. Yes, a satisfied feeling.

With all the star power included (ages aside), The Comedian isn’t by any means bad, but it could have been great. I’d imagine an actual aging comedian (Jerry Lewis or even the late Rodney Dangerfield) would have been perfect for the role, but alas it’s hardly ever that Robert DeNiro turns in a bad performance. You’ve got to really like and want to see this movie, though, as it’s hard to come by. It looks and sounds good, but the lack of any real supplements aren’t worth a purchase. 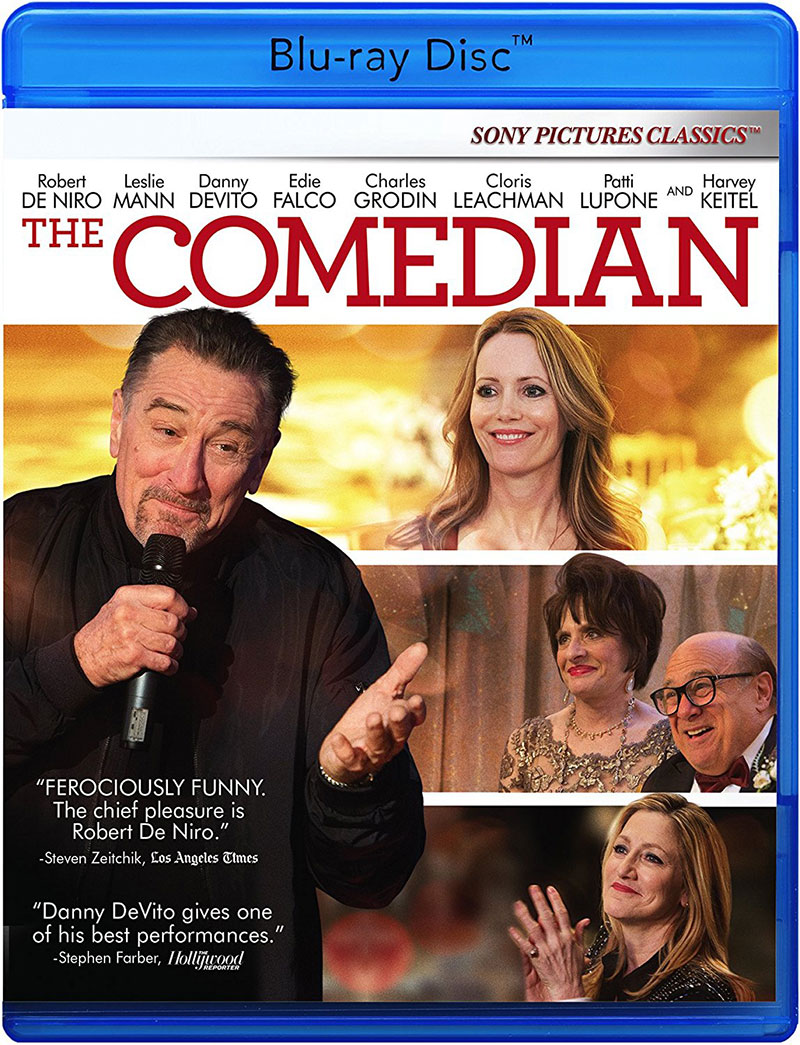