While it’s unusual for a director to remake his own film, it has happened before. Two examples come to my mind, The Vanishing and Funny Games. The trend continues with Cold Pursuit. While I haven’t seen the original film titled In Order of Disappearance, I will certainly seek it out now if for no other reason than to compare it to this one. I quite enjoyed Cold Pursuit, but I do feel some audience members expecting your typical Liam Neeson action vehicle might be a bit disappointed. There’s plenty of action here, but the film has a different feel from Neeson’s usual action fare. For starters, it’s a bit more low-key and Neeson almost feels like a secondary character at times. He gets his share of screen time, but there are long stretches where his character is missing and more focus is on the villains, most of whom are given quick intros and exits as no character is safe here. All the villains are quite colorful characters and the humor here is what took me by surprise. It’s very much in the vain of Elmore Leonard and Quentin Tarantino to some extent.

Neeson plays Nels Coxman, he’s a snowplow driver who lives in the Rocky Mountains and seems to live a fairly simple and content life. He’s just been awarded the Citizen of the Year Award, but things will quickly get worse as he and his wife (played by Laura Dern in a somewhat wasted role) learn their son has just died of a heroin overdose. Nels refuses to accept it as he’s never known his son to do drugs. Nels is attempting to commit suicide one night, but is stopped when a young man who has been beaten, comes to him and informs him that he was murdered by a drug cartel. This kicks him into revenge mode as he goes around the quiet town looking for who killed his son. It’s the earlier moments in the film that will likely please those wanting their action movie fix. The revenge stuff is entertaining and keeps things moving. Things do shift gears a bit, but the film remains compelling throughout. Quite a bit of characters are introduced, but the lead villain, Trevor “Viking” played by Tom Bateman steals nearly every scene he’s in. He’s going through a rough divorce with his wife and has strict dietary plans for their young son, among other things. All of his camaraderie of friends are entertaining as well. There’s a funny scene where a character mentions spending 100 nights a year at a motel and what he does to try to sleep with the housekeepers at each one. The payoff to this setup is even more amusing. It’s these moments that propel the film into something more than your run-of-the-mill action flick. There are some nifty plot twists as well.

One clever device the film uses is title cards for whenever a character perishes. This is a clever gimmick that surprisingly doesn’t get old. There’s even an amusing subplot when Nels hires a hitman to take out Viking and things don’t go exactly as planned. Nearly all the characters are given strange nicknames and they’re all given something to do. It might not be the Liam Neeson film that many were expecting to see, but it kept me entertained throughout and I had a smile on my face through much of it. In short: it delivers. It’s an action comedy with more emphasis on the latter. It works here and you wish more filmmakers could make this combo work, but too often action comedies simply go through the motions and forget the comedy part. This one doesn’t. Check it out.

This is an instance in which you can judge a movie by its Blu-ray cover. Yes, Cold Pursuit isn’t a film that’ll use every color in the spectrum and, visually-speaking, it’s a bit muted. Some of the icy, whitish outdoor scenes seem to convey a sense of desolation and that, to me, was the point. Lionsgate’s 2.39:1 AVC HD encode has plenty of detail go go around. We get plenty of shots of Neeson’s grizzled face juxtaposed with the sparse backdrop. Interior scenes are a bit warmer, but all in all it’s a good-looking transfer that should leave little to the imagination.

In the “well this is unexpected” department, Cold Pursuit is served up with a nice-sounding Dolby Atmos track. That’s right boys and girls (ok, boys), you don’t need to pony up the additional funds to enjoy some next-generation sound! The track sounds pretty darn good and consistent with that of an action movie, or essentially any Liam Neeson movie in the past decade. Dynamic range is a bit limited, but I found no shortage of action coming from each and every channel. And, as expected, Neeson’s grizzly voice leads the way in the vocal department. While not the best-sounding track out there, I did find that I had no real complaints with this. And it’s so nice to have a Dolby Atmos track on a Blu-ray.

While probably a bit different than most viewers will be expecting, Cold Pursuit is a damn good time. It delivers plenty of action and comedy, but the comedy is what helps set this film apart from so many in this genre. All the characters are colorful and are given plenty to do and the film moves along nicely. It’s something I could see myself returning to here and there. I also hope to check out the original film as well. Recommended. 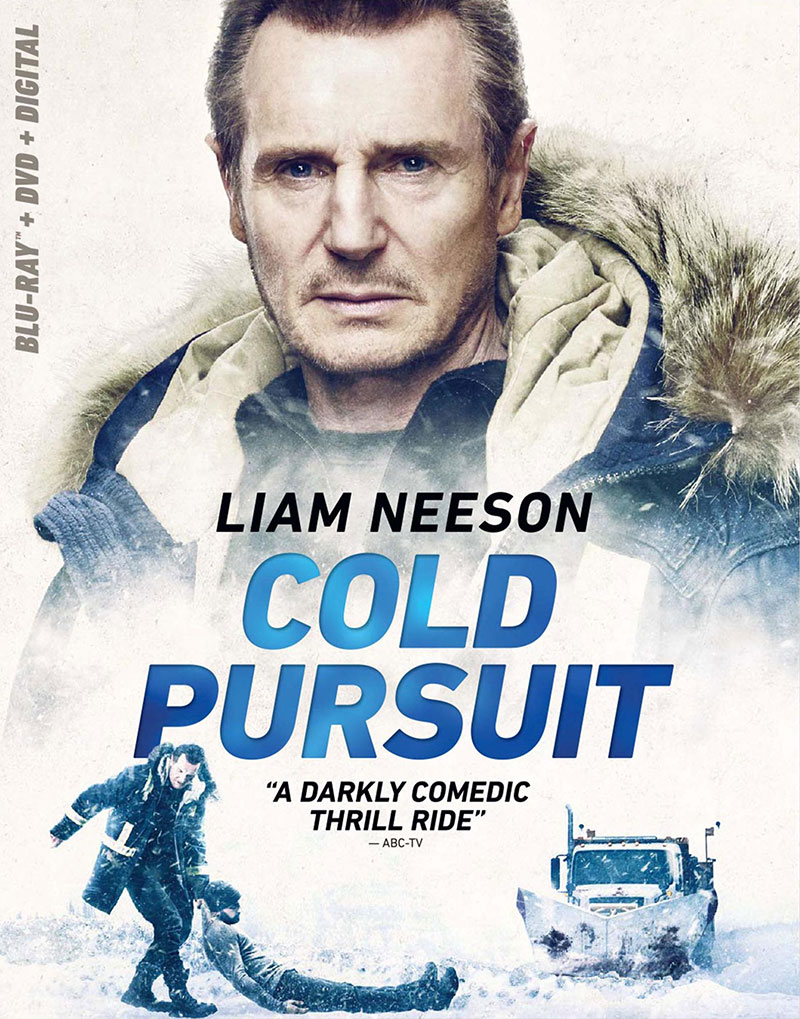