I recall reading about many of the summer of 2003’s sequels that failed to live up to the hype. This was largely in terms of Box Office, but many felt the quality of such films suffered. The Legally Blonde sequel was largely forgettable and many would just as soon forget the third Terminator film. Then there was Charlie’s Angels: Full Throttle. This sequel grossed less than the original film from 2000, and was considered a bomb by many even though it grossed $100 million. It isn’t hard to see why a third film never materialized. It would also explain why when DVD’s were still quite popular that the studio was quick to slap the “Unrated” tag on it. The differences between this and the PG-13 theatrical version are minimal, but if it helps with losses then so be it. I enjoyed this sequel a little better than the original and I think that’s for the presence of Demi Moore in the villain role. The late Bernie Mac replaces Bill Murry, but he’s tolerable. Let’s dive into the plot.

The film throws us right back into the action as we meet our returning angels, Natalie (Cameron Diaz), Alex (Lucy Liu) and Dylan (Drew Barrymore). There’s a rescue mission where they are successful in their rescue of kidnapped US Marshal Ray Carter (Robert Patrick). The angels do rescue Carter, but they aren’t successful in capturing two rings that he had. These contain names of protected witnesses and the angels need to recover these rings. Throw into the mix an inmate who has just been released and is also the ex-boyfriend of Dylan. His name is Seamus O’Grady (Justin Theroux) and he has one thing on his mind: revenge. There’s also Madison Lee (Demi Moore) who is an angel gone rogue. Moore is a great adversary to our three main angels and is clearly having a good time here despite a somewhat limited role. There are several other plot threads, but the basic outline is simple enough that the other pieces can work themselves out.

After viewing this film again after so many years, I forgot how much I enjoyed it. Seeing it now, some of the effects and stylistic choices can feel a bit dated (the slow motion cuts and quick edits as well as the music), but it also adds a bit of nostalgia to the film. I was surprised by how fast the film zipped by. It was over before I knew it. This is the definition of disposable entertainment. It features our three leads, often in skimpy outfits, kicking butt and saving the day. It asks nothing more than for us to turn off our brains and enjoy the ride. If you can do that then you should enjoy this sequel just fine. Seeing it again I do wish the three leads had one more film to end this as a trilogy, but that wasn’t meant to be.

Unlike the first film, this one isn’t given the 4K treatment. Still, it looks damn good. There was really nothing wrong with the transfer, though I could almost imagine how a 4K remaster would’ve sharpened things up even more. Still, the details are fine and the print pristine. The colors are well rendered with the sunny backdrop never appearing too soft or blemished. The pores and details on the actresses’ faces are heightened as well. The image is AVC encoded with a 2.39:1 ratio.

The DTS HD track kicks some serious butt. Even at a lower setting, the track was loud and to the point. Background noise is strong and there’s a strong balance across the track. The various action scenes and kicks bring us into the action. There’s crispness to the vocals and really little to complain about here.

Charlie’s Angels: Full Throttle gives us a satisfying sequel that delivers more of what you can expect if you’ve seen the first film. I enjoyed it a shade more than the first one and enjoyed the presence of Demi Moore as well as others. This Blu-ray repeats the ton of features from the DVD with exceptional audio and video. I wonder why a 4K version wasn’t released, but I feel pleased enough with this. 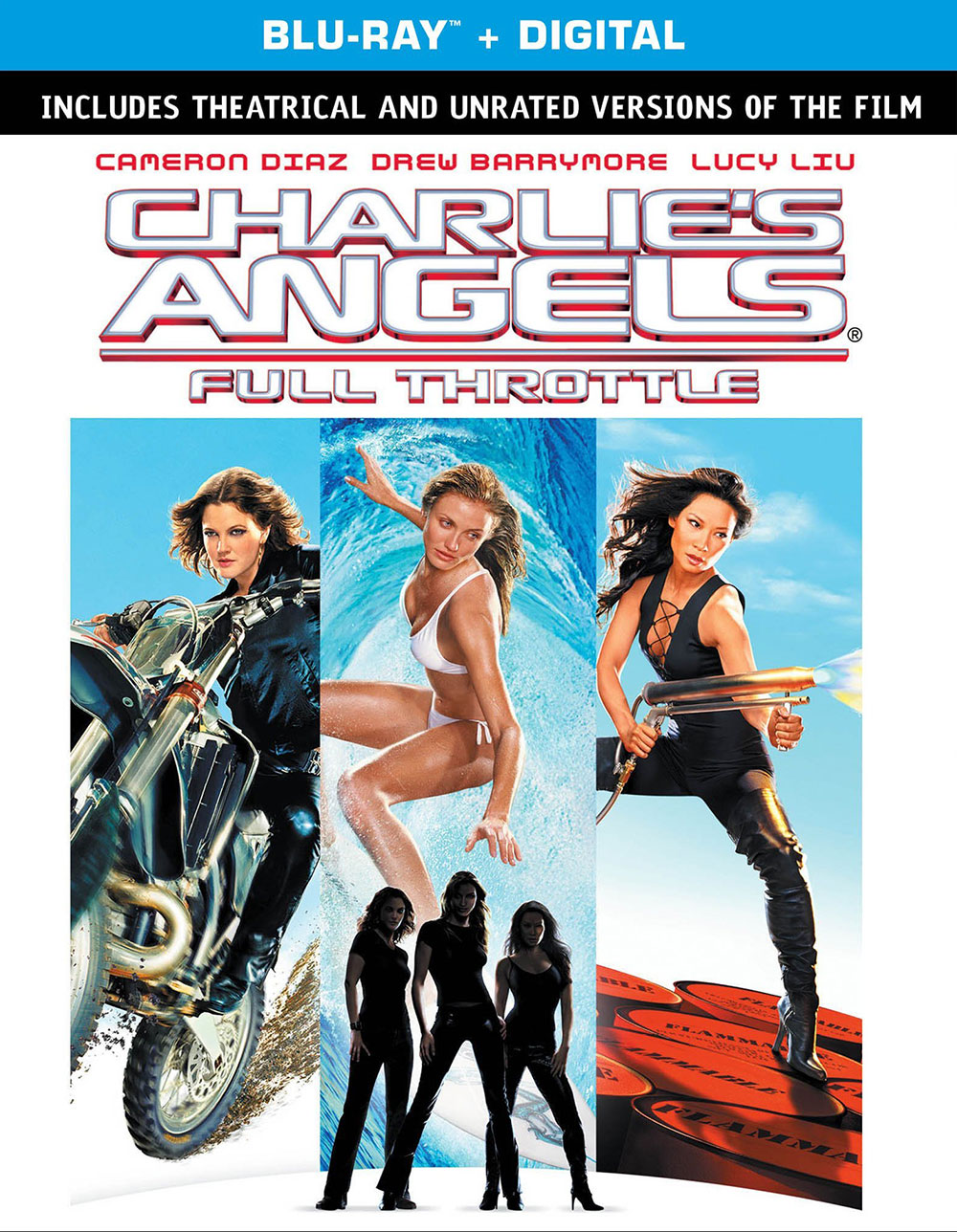