Catch Me if you Can (Blu-ray)

Steven Spielberg had a pretty active year in 2002. After coming off his big special effects collaboration with Tom Cruise in Minority Report, Spielberg took a different turn for a lighter movie in the inspired by a true story genre. When I had first seen it, I liked it but as I noticed the second time viewing this film on the big screen, it was a case where the second time played better than the first time around. The film was Catch Me If You Can.

Frank Abagnale Jr. (Leonardo DiCaprio) is a normal teenager of a regular marriage. That is until one day, because of his father’s (Christopher Walken) tax problems, his mother cheats on the side and files for divorce. This causes Frank to run away. Upon his running away, he decides to get through using bad checks. This expands even further when Frank passes by a Pan Am airline pilot and thus begins the adventure of Frank impersonating a professional position as a pilot and many other jobs, unaware that agent Carl Hanratty (Tom Hanks) is on his tail with every check that he writes.

From the Saul Bass inspired title sequence accompanied by John Williams’ jazzy Henry Mancini- inspired score, I knew I was going to be in for an intriguing trip. I didn’t expect it to be that intriguing of a trip, especially the second time around.

The period is captured nicely with Spielberg’s great use of color and outfits as well as the cat and mouse tale with DiCaprio and Hanks making good adversaries and allies with each other.

After watching a special with Abagnale on ABC, I thought DiCaprio was going to be the wrong choice for the lead but, as every minute of the film went along, I was convinced no other actor could’ve pulled it off better than him. His Frank has the charming manner, the innocence and the love of his parents. He captured the struggle of the sudden broken family syndrome that ultimately comes back to haunt him.

The rest of the cast works well, especially Christopher Walken. As a father that looked like a success but ultimately ended up a failure, Walken captures the mood of a father that wishes he could’ve provided a better future for his son and his wife but couldn’t in the long run and Frank Jr. never changed the way he felt about him from start to finish.

For the short schedule that Spielberg and crew worked on this film, he made a more than satisfying film that gets better on multiple viewings.

From the very unique opening credits to the more standard closing ones, Catch Me if you Can has finally arrived on Blu-ray looking very smart indeed.  The 1.85:1 AVC HD transfer has cleaned up a bit since the inaugural DVD release way back in early 2003.  The film takes place in the 60’s and, as such, we get a very glossy transfer that’s ripe with colors.  Detail has been improved and I noticed no grain present on the print.  There are a few faults, some of the scenes do look a bit soft, but not too many.  A fine effort here, for sure.

The DTS HD Master Audio soundtrack is fairly impressive.  Again, I point to the opening credits with the Saul Bass-inspired look and feel to the Mancini-esque tempo that really gets the film moving.  Suffice it to say that John Williams’ score sets the mood and tone of the film.  Vocals are clear and concise and though I’d have liked to hear a bit more from the surrounds, they kick in enough to make their presence known.  It’s an above average mix that more than serves its purpose.

Unfortunately this pseudo-10th Anniversary Edition doesn’t give us any new supplemental material.  The same featurettes are present as they were on the two-disc DVD a decade ago.  “Catch Me If You Can: The Casting of the Film” covers all players individually on how they got cast along with their reaction to working with Spielberg. The one that intrigues the most is the Walken segment with Spielberg directing a scene with a few takes and getting to see the Oscar winning actor and the director at action during one key scene of the film. “Scoring Catch Me If You Can” covers John Williams and what styles he chose for the score of the film. I kind of wished he had explained his previous connection with Henry Mancini. Despite that, it’s always satisfying to hear anything from John Williams anywhere. “Frank Abagnale: Between Reality and Fiction” covers the real life figure and goes into a few of how he was able to do what he did. “The FBI Perspective” shows the connection between technical advisor and the director, with Spielberg and William Rehder discussing capturing the time both historically and facts within the FBI end of check forgery. “In Closing” summarizes shortly comments from the main players and finishes off the featurettes. They are all good but if there was only the Play All function, things would be much easier to go through. We get a photo gallery which rounds out the supplements. 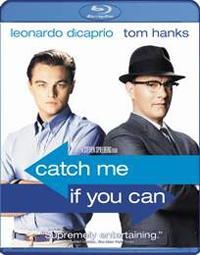