Do the jungles of South America contains bands of violent, savage cannibals? That’s the question a woman and her documentary crew seek to answer, by going to the Amazon in person and investigating the situation. The jungles are filled with dangers of all kinds to be sure, what types will this crew run across? Once they arrive on the scene, they discover a man eating a slug of some kind and they then realize how raw and untamed this area is. The folks soon meet up with a man and his injured friend, who claim to have escaped the clutches of cannibals and of course, that intrigues the crew. The man tells them how they tried to kill him and his friend, and actually tortured and murdered another companion of theirs. The crew believes him and all, but they soon have reason to doubt him when he begins to do cruel things to some innocent villagers. Soon the locals stage some cruel acts of their own and before these outsiders know what happened, they’re under the control of these people. Will any of them manage to escape this jungle hell, or will they all be forced to pay for one man’s sadistic actions?

The question I’m asked most by people who haven’t seen this movie is, “Is it as sick as everyone says?” I think answer depends on how much you’ve heard and your levels of tolerance for blood and violence. I don’t think the blood and guts is what makes this movie so memorable, I think it is the whole tone and mood of the movie. It was shot on location in the Amazon and as such, the entire thing just seems realistic in nature to me. The actors don’t give good performances, but that’s good in my eyes because they come off as normal people, in an unusual situation. As far as the blood, there is a lot of it to be seen and some pretty graphic goods are shown, but I think horror regulars can handle it. Of course if you only watch teen comedies or the like, then you might be shocked and taken back by what you see. In terms of exploitation movies, Cannibal Holocaust is a must see and for most fans, a must own also. This disc is more than worth the money, so don’t hesitate to grab this release.

This film was written and directed by Umberto Lenzi, who knows how to make an effective low budget movie, especially if you want a jungle based cannibal flick. Lenzi uses realism to promote atmosphere and mood in this film, and I am sold on the idea hook, line, and sinker. I love the tone of this movie and I think it plays just as much a role here as the gore and violence. I doubt any awards will be given for the technical side of the film, but the compositions and overall style mesh to perfection with the material, in my opinion. Lenzi dabbled in several other genres such as crime flicks and normal horror, but these cannibal movies are his finest work if you ask me. If you want to see more of Lenzi’s work I recommend Man From Deep River, Almost Human, Emerald Jungle, From Hell To Victory, City Of The Walking Dead. The acting in this film is decent enough, but don’t expect Tom Hanks to show up in this one. The cast includes Lorraine De Selle (Blade Violent), Zora Kerova (The New York Ripper), Danilo Mattei (Mark Of The Scorpion, Ironmaster), and of course, John Morghen (City Of The Living Dead, Cannibal Apocalypse).

Making its debut on Blu-ray, Cannibal Ferox has undergone a 2K restoration and is presented in a 1.85:1 AVC HD transfer.  Prior to the DVD release, the film had never seen a decent home video release and the source material was less than stellar. While not perfect, this is a marked improvement over the previous DVD and while there is still some grain and debris to be seen, it’s much less than previous versions. The colors seem natural, though slightly muted and no smears emerge in the transfer. The contrast is well balanced on the whole, and no serious errors rear their ugly heads. While grain persists, it is the best the film has looked on a home video format. This may not be the best thing as the film is a bit on the gory side. You’ve been warned!

Two audio tracks are included with a DTS HD Master Audio stereo track as well as the original mono in Italian. I noticed a lot of surround use and some terrific directional activity. The the jungle noises, slices and stabs, and the eerie musical score, it all sounds excellent in this new mix. The dialogue is poorly dubbed at times (though this not the fault of this release), but it sounds crisp and clear at all times. This is proof that you don’t need 7+ channels firing away to have an effective and dynamic mix.

The real treat of this three (yes, three) disc edition are then wealth of supplements included. There are a lot, so let’s get started.
Disc One

Look, Cannnibal Ferox won’t be for everyone. In fact, I even had a hard time with it. There aren’t many films that have an NC-17 rating and this one is for good reason. If you can look at it objectively, which I can, then there are certain things to appreciate. Still, the graphic violence and some of the subject matter make this a polarizing choice for some.  This Blu-ray knocks it out of the park with above average A/V and a ton of supplements. Fans will want this one on their shelves for sure. 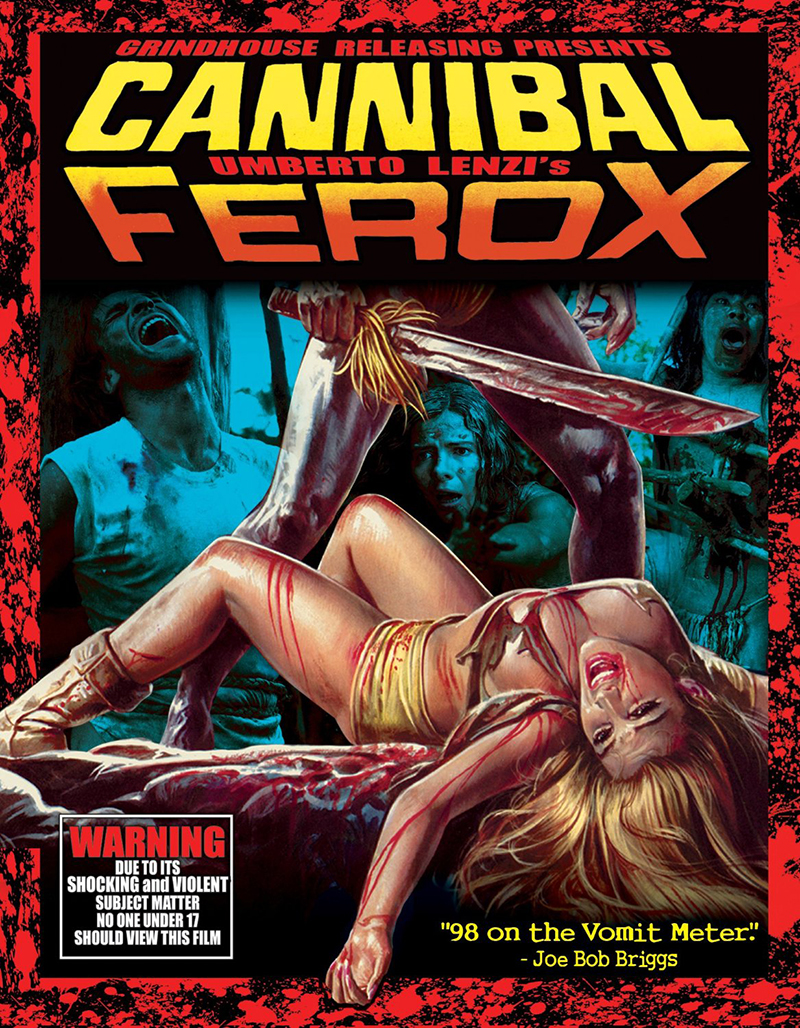