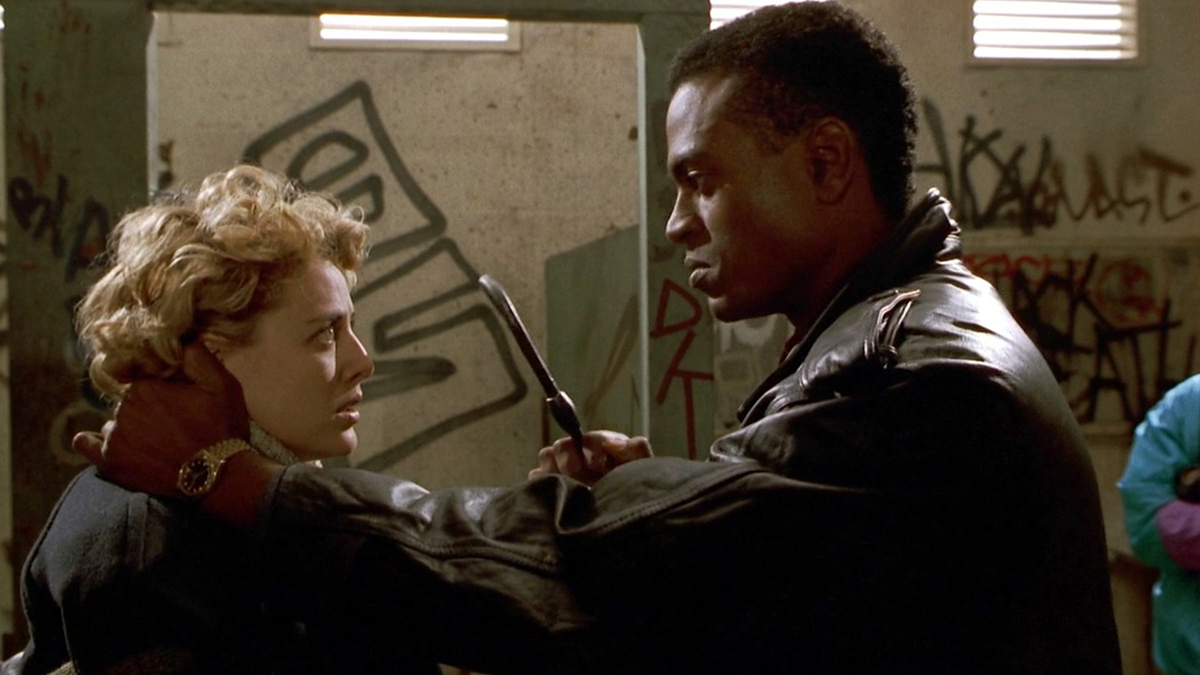 “If you look in the mirror and say his name five times he will appear behind you, breathing down your neck.”

Shout Factory and their sub-label Scream Factory is easily one of the best distribution labels of horror and cult films. Over the years they have given fantastic releases to films ranging from Raising Cain to The Thing. I check monthly to see what they are working on and I was very excited to see that they had finally landed the rights to Candyman. This was always a release that seemed a natural fit for the label and had been strangely missing on Blu-ray despite being one of the best-known horror films of the Nineties. The film is loosely based on the Clive Barker short story “The Forbidden” from his Books of Blood – Book 5. I found myself recently on a bit of a spree reading his books and that short story is one of his strongest from the set. When I saw that the film was up for preorder with an exclusive poster, I couldn’t resist ordering it. My little sister and I watched it together when she came in town,

At the University of Chicago, a grad student named Helen Lyle (Virginia Madsen) writing a thesis on urban legends and their basis, comes upon the story of the Candyman. People claim that if you say his name five times in the mirror, he will show up behind you. They claim he is missing a hand and has a hook in the middle of his bloody stump. Helen wants to prove that the urban center of the city had turned to this legend to explain some of the violence that had befallen their community. While doing research, she finds that her apartment used to be a housing project. She investigates several unexplained deaths attributed to the Candyman and finds a unique anomaly in the housing design in the projects. All of them have a wall in the bathroom that shares a mirror with the other side of the wall. This leads her to believe that the people that had been attacked by the Candyman were attacked from behind the mirror. Helen learns from another professor the story regarding Candyman (Tony Hale) and how he had lost his hand. He apparently was an artist and former slave. When he was found to have a relation with a white woman, the townspeople cut off his hand. They smeared a honeycomb on him from an apiary and allowed the bees to sting him to death. His ashes were spread where they built a housing project. As Helen investigates the housing project where his ashes were spread, she puts herself in danger both natural and supernatural.

The Nineties is an era that gets a bad rap for its horror films. I love horror from the Eighties and giallo films from the Seventies, but I also like horror from the Nineties – especially Lord of Illusions and Candyman. These two films share one thing in common – they are both based on short stories by Clive Barker. Barker’s stories and the films based on them are uncommonly intelligent even if they are not for everyone. Barker is too morbid for some, and for others he goes just a little too far into the fantastic. For myself, I like his books and movies for the amount of imagination that goes into them. His short story served as a small framework for what Candyman became. Under the direction of Bernard Rose, the film evolved into something more expansive and in my opinion even better. The film chose to be set in Chicago rather than working class England. The film chose to have African American actors in prominent roles and to make racial identity important to the film. None of that is in the story. The film manages to encompass the feeling of the story while being very different. Clive Barker was happy with the final product and as a viewer I feel safe in saying that you will enjoy it also.

While schlock was par for the course in most horror films from the early Nineties, Candyman reveled in bringing as much sophistication as it could to the subject matter that amounted to a retelling of the Bloody Mary urban legend. How many horror films from that time period would be able to coax modern classical music impresario Philip Glass to compose the soundtrack? Only director Bernard Rose would have the gall to bring this project to the same composer that had been used primarily for the documentary films by Errol Morris – one of the most beloved documentary filmmakers of all time. Bernard Rose approached the film as an art film and came out with something special. That is not to say that this film does not use a lot of familiar horror tropes. The film uses a lot of the jump scare tactics and there are scenes of violence that exhibit some bloodlust that is not common to many other types of films. What is surprising is that when the film first went to the ratings board, they tried to give it the dreaded NC-17 rating. In order to get an R-rating they shortened one killing scene and reduced the amount of blood that hits Helen’s face. This change achieves almost nothing but is the difference between the Unrated and Rated R cuts.

The acting in the film is strong. Virginia Madsen has proven her chops in numerous films and is good in the lead role. Tony Todd delivers one of the great horror-villain performances as the Candyman himself. Todd was excellent casting due to his strong build, unconventionally handsome looks, and booming voice. If we were looking for another great narrator for a film, I would throw his name in the hat. Supporting roles are filled well by Xander Berkeley and Kasi Lemmons. The direction by Bernard Rose is strong – especially for a horror film. To get a truly memorable performance out of Virginia Madsen he actually hypnotized her. Cinematographer Anthony B. Richmond was best known for his work on the classic Nicolas Roeg’s film Don’t Look Now before filming Candyman, and he does a fine job.

At the end of the day, this is some of the best horror cinema from the Nineties. It is one Blu-ray release that horror fans have been wanting for over a decade and now the wait is over. If you are like me, this fills a gap in your collection that has been a long time coming.

Candyman arrives on Blu-ray with a 1080p MPEG-4 AVC encoded image in 1.85:1 from a new 4K scan. The results of the new 4K scan are pretty amazing. Fine detail is excellent. From the opening shots above Chicago, to the final salvo of the film, this new transfer is revelatory and makes previous iterations of the film obsolete. I watched the film on my UHD 65″ television and it looked fantastic. Grain is evident but not obtrusive. This is one of the finest transfers in the Shout catalogue and fans of the film can issue a sigh of relief. It looks great.

Similar to the video, the audio presentation on Candyman is excellent. The DTS-HD MA 5.1 track gives a great surround treatment to the orchestral work by Philip Glass. This is one of the least conventional and most enjoyable horror film soundtracks out there and one of the defining differences between this film and others. The dialogue is crisp and clear. I didn’t notice any hiss and the track gave me the occasional jolt. Good stuff.

Candyman is a milestone of horror cinema from the Nineties. This is easily one of the best horror releases of the last year. Shout Factory has gone above and beyond with an amazing transfer of both the Rated R and Unrated versions of the film. It has never sounded or looked better. The special features sprawl across two disks and they are well worth your time. New interviews abound. If you are a fan, you should probably buy this immediately and start watching the amazing special features on the disc. They are well worth your time. This is definitely a highlight from a great year from Shout Factory.