I can still remember seeing Camp Nowhere with my friends back in the day. The theater where we saw it was very close to where I lived and only showed two movies at a time. While the film is hardly a classic, it was a nice nostalgia trip revisiting it all these years. It holds up surprisingly well, and zips by rather quickly. We really don’t see a lot of live action family films like we used to so this was rather fresh when animated fare is what mostly invades the market when it comes to these kinds of flicks.

Outside of one summer, I was never sent off to summer camp. For this (and a variety of other reasons) I really looked forward to the summer time. The long days of riding bikes, playing in the creek with friends, hanging out by the pool and other childhood things that I cherished. That’s really all the characters in this film want to do as well, but they’re always sent away to some lame camp by their parents. Our lead character named Morris “Mud” Himmel (Jonathan Jackson) has something of a problem. Each summer his parents insist he go to a computer camp, but he wants anything but that as he feels it’s too dorky for him. He learns his other friends have the same problem. He discovers a man working at the mall one day selling cheese and wearing a goofy hat. This man is Dennis Van Welker (Christopher Lloyd) and he used to work at Dennis’s school. Before long, Mud gathers some friends and they try to convince Dennis to help them sneak away to this newly made up summer camp. Dennis owes money on a car, so the kids are quick to blackmail him into helping. With a bit of convincing, all their parents agree to let their kids go to the specific made up camp. Unfortunately, word of mouth gets out Mud and his friends now have several students wanting to go to this pretend camp as well. Now the summer that they all dreaded will now be a summer of endless fun. Mud only has a few rules for his friends to follow, one of them is they must write a letter to their parents once a week just to keep suspicion to a minimum. Surprisingly, the plan works, but Mud does injure his arm one day. This accident brings Dennis (who is staying at a cabin nearby) back in to the story. He eventually begins a small relation with the local doctor who may or may not suspect something isn’t kosher. All these events eventually lead to all the kid’s parents arriving at the same camp to visit their kids.

Camp Nowhere works best if you don’t overthink things. In reality, this type of thing could really never happen, but that hardly matters. The film remains fun and doesn’t take itself too seriously. While it is more of a kid film, there are plenty of jokes that the adults can enjoy as well. It reminded me a bit of Heavyweights which came out about a year after this one. Christopher Lloyd is clearly having fun in the role and all the other actors do fine in their respective parts as well. Watch for Jessica Alba in her debut role as well. M. Emmet Walsh also has a small role as the debt collector looking for Dennis. As I watched this film I couldn’t help but think of how it really couldn’t work in today’s world. Nowadays with GPS tracking and social media, it would be discovered rather quickly that the kids are not in fact at a fictional camp at all. I could see the kids snapchatting or tweeting pictures about them. That makes viewing the film all the more rewarding now as it exists in a world free of cellphones and the internet.

The last I saw this film was back in the 90’s when it debuted on VHS. Needless to say this is a definite improvement in picture quality. There’s a general sharpness to the image and the details shine through almost constantly. We get an AVC encoded 1.85:1 transfer that, outside of only occasional grain looks excellent all around. Colors are sharp, details strong and background shots clear. Fans will be delighted with the results here.

The DTS HD track is also solid. Vocals are always clear sounding and the camp scenes in particular help add to the track and put us front and center in the action. There are good dynamics and a strong range that works in the films favor. Like the transfer, fans should be pleased.

Camp Nowhere won’t be remembered for a classic kid’s film, but it works because we see things from the kid’s perspective. Christopher Lloyd does great work here as do the other child actors. I wish this new Blu-Ray included a bit more features, but the commentary track is a good one. Recommended. 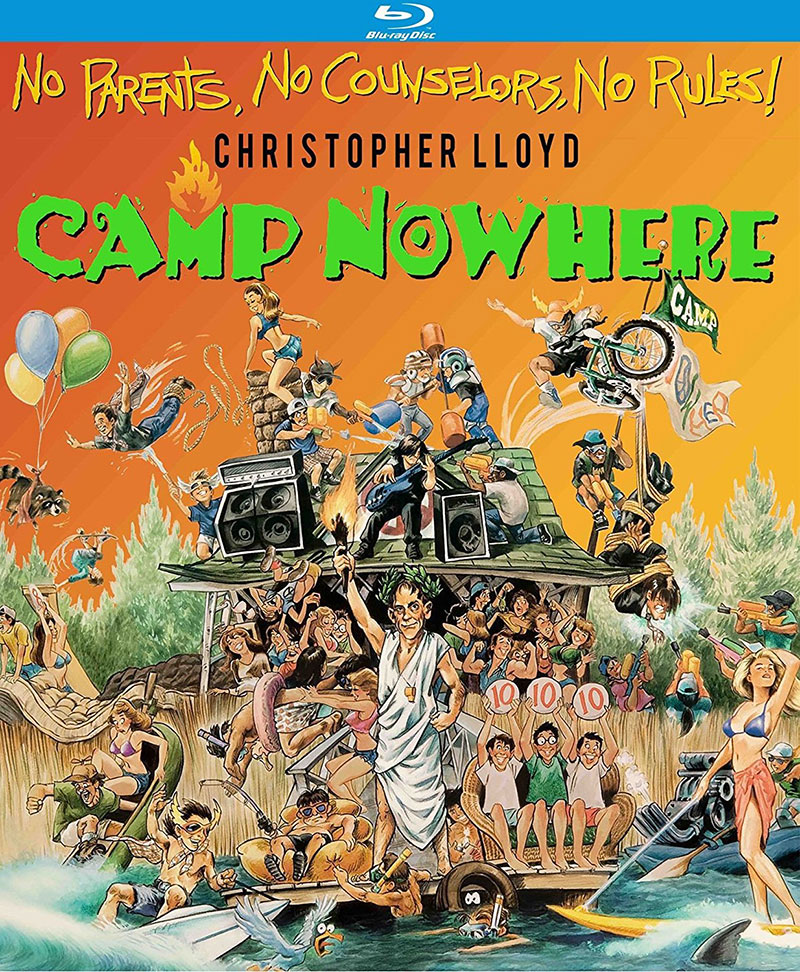