Call Me by Your Name (Blu-ray)

As of this writing, the 2018 Oscars have come and gone. The winners have been selected, the rest of the field is most likely back to work doing their thing. But in the aftermath of the Academy Awards, we (the movie goers) are left with some new things to see. Things that might have been overlooked during the course of the year or things that, during the “awards” season, we were just too busy to sit down and watch. One of those films, for me, was Call Me by Your Name. I’d heard of it, but my attention was focused on other films and this one just slipped though the cracks. I was somewhat familiar with the premise, but this was one of those movies that I didn’t want to know too much about before starting it. And I’m glad I didn’t, because that made it that much better for me.

The film takes place in the early 80’s and stars Timothee Chalamet as Elio, a teenager who lives with his mother and father (Michael Stuhlbarg). Set in Italy, the family receives a visitor, Oliver (Armie Hammer) who’s working on his research. He’s a bit of an academic, a bit aloof but he’s nonetheless got the attention of Elio. Elio does date women, but finds that he’s got feelings for Oliver and his new houseguest is slowly awakening some primal urges. Oliver manages to encourage this behavior in Elio and reciprocates which leaves the two in the throws of a romance.

I’m going to repeat this below, but I will say that this film won’t be for everyone. Even as progressive as we, as a country, have become, there are still the masses who won’t want to see a story of two homosexual men on screen. Would it be too much to ask for these people to see these “men” as people and simply being in love? Perhaps. Regardless of how the red states will view this film, I found it well-made, acted and written. It’s a story that we don’t see a lot of and it’s told in a way that resonated with me long after the credits rolled. Armie Hammer is best-known for his mainstream roles, but he’s in rare form here and the Academy missed the mark by not nominating him. Overall it’s a love story and one that should be celebrated by anyone. And everyone.

Presented in a 1.85:1 aspect ratio and, gasp, shot on film – Call Me by Your Name has a look and feel that’s uniquely its own. Having been to Italy just last year, some of the locales reminded me of the places I visited and it’s a very picturesque movie, to say the least. Colors are bright and bold, detail is sharp and there’s a fine layer of grain that gives the movie a more natural look and feel. Sony’s Blu-ray presentation is a top notch effort and it’s one of the better-looking films (I say that with dual meaning, of course) I’ve seen in some time.

The included DTS HD Master Audio sound mix isn’t something that’ll be “in your face”, but just listening to some of the subtle nuances that this track has to offer is a real treat. Vocals are pure, rich and crisp. Some ambient surround effects really add to the strength and depth of the track while the score resonates throughout. This is a perfect example of “less is more”, but it manages to do it in a way that’s both unobtrusive and powerful. It’s a wonderful track.

Call Me by Your Name won’t be for everyone, but it’s a lot better than I thought it would be. Those doubting the presence of Armie Hammer need look no further than this film, though he’s given some great performances in other films as well. Sony’s disc both looks and sounds good and there are enough supplements of note to warrant a purchase. Even if you decide not to purchase it, it’s one that screams to be seen. 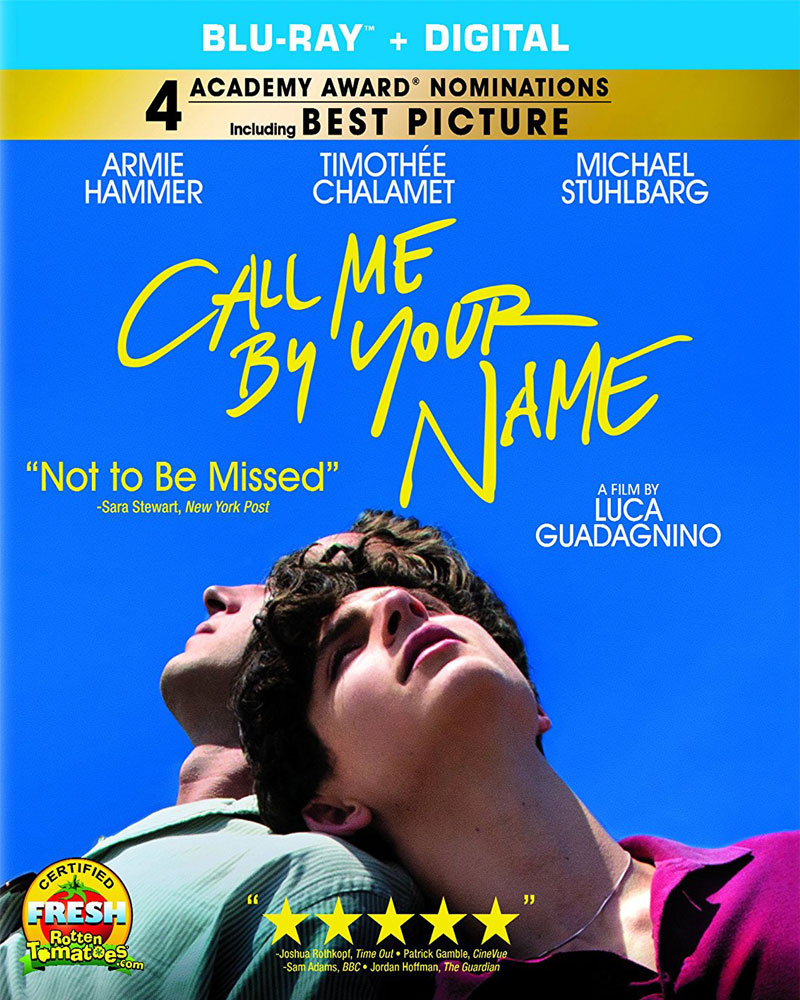