The Cabin in the Woods (Ultra HD 4K Blu-ray) 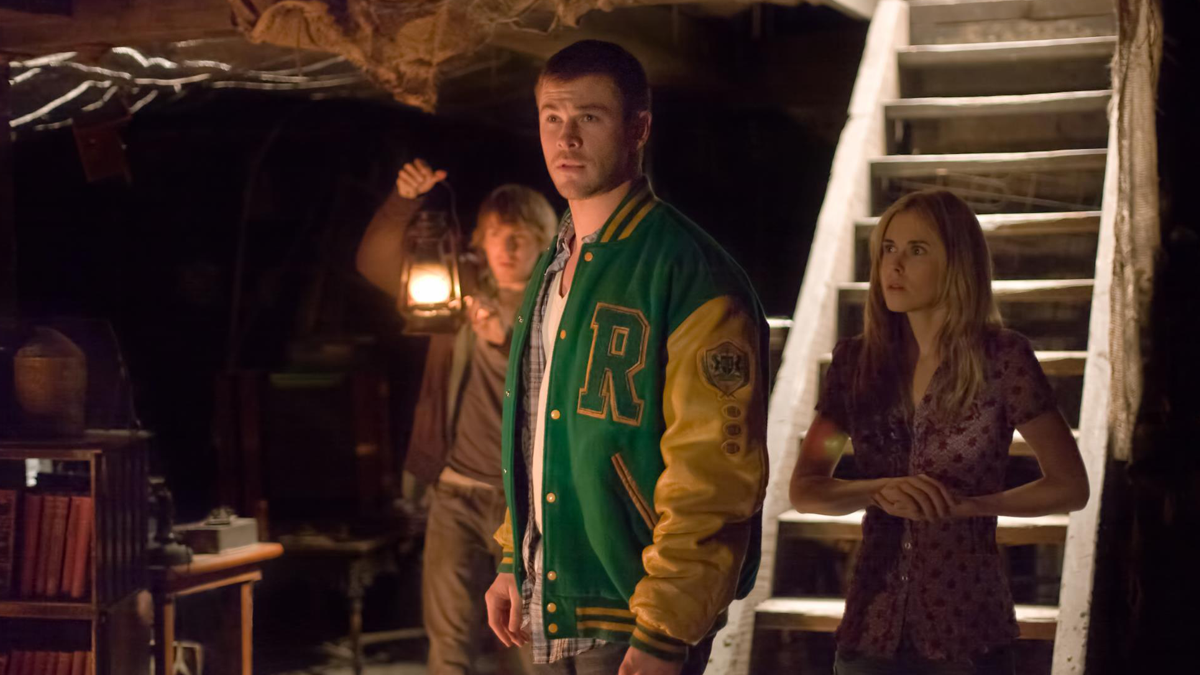 Just a shade over two decades ago Wes Craven decided to do something a bit…odd. He made a movie that, in no small part, mocked the very films that made him one of the most notable horror directors. And it worked. In case you’re wondering, the name of that film was Scream and it inspired three sequels as well as a television show. Not bad for a satire. Flash forward to 2012 and we once again have a film that defies convention and isn’t at all what we expect. Judging a book by its cover (and, let’s face it, we all do), it would appear that it’s just another horror movie. But it’s so much more! And it’s got Chris Hemsworth and he’s Thor. So, you know, it’s got to be worth watching, right?

The review of the plot won’t be like most others, namely because this is one of those films in that the less you know, the better your viewing experience. For what it’s worth, our story begins with five friends preparing for a weekend trip to a remote cabin (guess where it is). We meet Curt (Chris Hemsworth), obligatory blonde girlfriend Jules (Anna Hutchison), requisite stoner Marty (Fran Kranz), the innocent Dana (Kristen Connolly) and the new addition to the group, Holden (Jesse Williams). We see the group as they head out in their RV, they get lost, ask for directions, are warned to stay away from said cabin that they’re heading to (which they ignore, naturally) and then the fun begins. We do meet a few other players in the film in the form of Sitterson (Richard Jenkins) and Hadley (Bradley Whitford) who may or may not play a huge role in the film. Enjoy!

I’ll say this below as well, but what’s so good about this film (even after seeing it upon its initial Blu-ray release) is that it’s so fresh and it has the audacity to make fun of the very genre that it resides in. How cool is that? This is why films about Hollywood are usually so spot on. Think of The Player, Sunset Boulevard, All About Eve and countless others. Putting all that aside, let’s consider one of the writers – Joss Whedon. He’s got a cult following with Firefly and he’s also made a few other films – ever heard of The Avengers? Like Scream, you’ll laugh nearly as much as you get scared, but it’s a fun ride. This is one of those movies where I wish I could erase the part of my brain that remembers seeing it. Yep, it’s that fun.

Consistent with most horror films, Cabin in the Woods makes use of everything in the genre. A dark atmosphere, plenty of violence and an general “spooky” ambiance. The film, originally released in 2012, isn’t that old and the Blu-ray looked/looks just fine. The Ultra HD disc does offer a bit of a cleaner look and some of the darker scenes seem to be a bit smoother, for lack of a better word. The 2.39 HEVC 4K image does benefit from HDR, but as one might expect – it’s not a night and day difference versus its Blu-ray counterpart. I wouldn’t think this would be a title that screams (pardon the pun) for a 4K release, but I have to assume there’s a marketing ploy behind it. Nevertheless, it’s a step up in quality.

A nice surprise is the new Dolby Atmos soundtrack. It’s a noticeable uptick in performance from the previously-released DTS HD Master Audio track, but that one is by no means slouching in its delivery. Again, consistent with the genre, we do get the obligatory “jump” sound effects that do work with great effect (particularly during the opening credits…you’ve been warned). The dynamic range is all over the place (in a good way) and it makes me appreciate and justify the money I spent on an Atmos receiver. Take that bank account! There’s nothing especially wrong with the DTS HD Master Audio track, but when you’ve got an Atoms track and the proper equipment – let ‘er rip.

Most all of the supplements from the previously-released (and second disc in this set) Blu-ray are included on the Ultra HD disc.

The Cabin in the Woods does something that a lot of other films don’t – it’s original. It takes a tired old genre (in this case, horror) and pretty much flips it on its head. With the creative force of Drew Goddard and Joss Whedon holding the reigns, it’s a fun ride as well. I’m not sure of the absolute need for this UHD release, but it’s out there and if you were waiting for a reason to add it to your 4K collection – no time like the present.