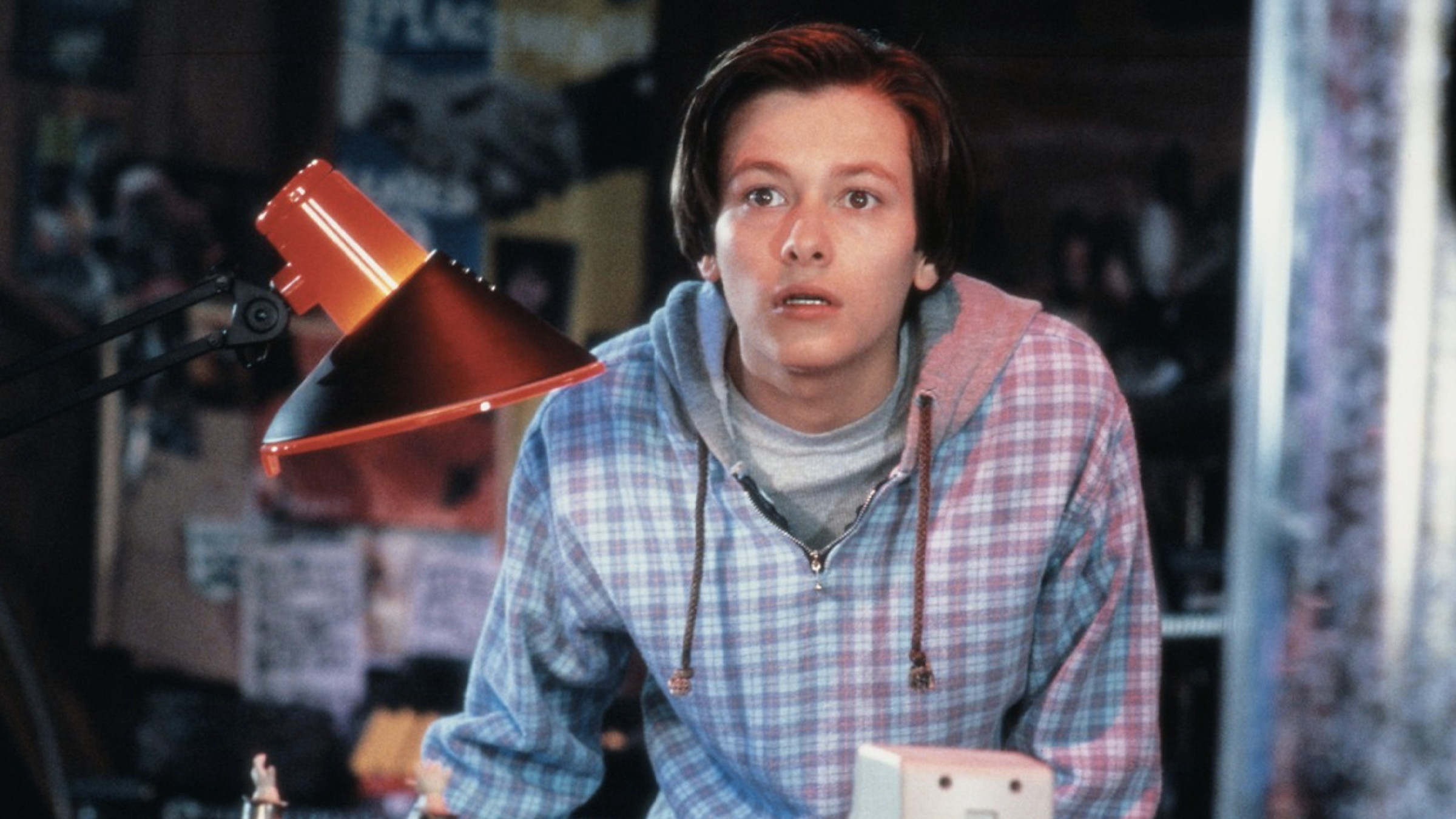 A couple years ago I watched a movie called Virtuosity on Blu-ray. I had not been allowed to see that movie when I was growing up due to its stern R rating. This film catapulted me into watching every single cyber punk film possible. Johnny Mnemonic, The Lawnmower Man – anything that dealt with virtual reality was just a blast to watch. Looking at a website that listed the best cyberpunk/ virtual reality films, Brainscan made the list and, of course, piqued my interest. This little modestly budgeted film was not something that people said was particularly great – but it had been voted up to about the seventh place on the list. This helped me understand what I was in for. When I saw that Shout!Factory was releasing the film, I was excited. As a Blu-ray collector, I had not considered buying one of the numerous cheap copies out there of the DVD and wanted to hold out until a Blu-ray surfaced. I purchased a copy and sat down to watch it this last week.

Michael (Edward Furlong) is having a nightmare- a child with a severely broken leg crawls to his mom after a terrible car crash. It’s really a flashback to when his mother passed away. His friend Kyle calls him about a video game named Brain Scan that “puts you into the game.” Michael peeks on his neighbor Kimberly in her bra from his bedroom which is full of computers and video game gear. He sometimes videotapes her (which is not creepy at all, right?) He calls the ad in the pages of Fangoria at 1-800-555-FEAR. He asks about the game. He is told, “it’s the most frightening experience you will ever have the displeasure of coming into contact with.” Brainscan is more than just a game. It interfaces with your subconscious. He gets a shock from the call itself, and is told his first installment will arrive soon. The next day, Michael’s horror club at school gets him in trouble when they watch “Death, Death, Death Part 2.” Heading back home there are police at a crime scene led by Detective Hayden (Frank Langella.) Michael is sent home by the detective when he tries to take a look at what happened. Brainscan arrives in the mail. His father is out of town on business and leaves a message that he will be back in a few days. Michael sees the party happening at the neighbor Kimberly’s house and, being the outsider he is, he pops in Brainscan. The game warns Michael that over the next couple hours he will be viewing a murder from the point of view of a killer and he will affect the killer’s actions. The game is far more realistic and insane than he could have imagined. Michael does as the game instructs him and kills a man in the man’s house. The next day, Michael is shocked to see that the murder he committed is being investigated by the police. When he gets home he finds the evidence from the crime scene at his house. The character from Brainscan, The Trickster comes out of the television and introduces himself. He wants Michael to keep playing the game.

Brainscan made me nervous with its opening scenes. The first kill is not particularly graphic, but it made me worried that the film was going to go in a direction that I would have trouble stomaching. Luckily, the film actually showed much more restraint than expected. There is a lot more tension than there is actual violence. It doesn’t try to push the envelope too far and never becomes incredibly grotesque.

Brainscan stands out as a film that was obviously aimed at the young horror aficionado outsiders that resemble the main character of the film. Michael is a good fill-in for the metalhead gorehound video gamer teenage boys that the film is aimed at. The film is much more effective at displaying the outsider ethos of the early Nineties than most films that tried to appeal to that generation like Airheads or Biodome. With music by White Zombie, Primus, Pitchshifter, Tad, KMFDM, Butthole Surfers, and more, this film feels like the Singles of the industrial/grunge/heavy metal horror set.

The script by Andrew Kevin Walker, of Se7en fame, is pretty effective even if certain actors in the film are not given much to do. The film has a nightmarish quality that will probably fray viewers on the first viewing, but I think the film would lose some of that edge on the second viewing. One interesting aspect that the special features revealed is that the script itself was written in 1989 and the Trickster was not the virtual reality creature come to life that it is portrayed in the movie, but actually just a voice on the phone. That little bit of information made me want to rewatch the film again.

Edward Furlong is well cast in his role as the peeping neighbor gamer Michael. I can’t think of anybody in the Nineties that could have been better cast for this role. Amy Hargreaves does justice to her role as Kimberly. T. Ryder Smith really sinks his teeth into his role as the Trickster and is properly menacing. Frank Langella is largely wasted in the film despite being well-cast. His role is not ever fully fleshed out in the film, which is a shame.

This movie is a bit of a mixed bag. As a whole – it is a bit ridiculous, but then again any film that operates in the virtual reality arena tends to be pretty hard to swallow. This is not as fun and accessible as other VR entries like Virtuosity or The Lawnmower Man. It does have a lot of nostalgic value and the protagonist of the film is actually pretty well written. The Trickster is definitely a memorable creation for the film. Halfway through the film I did not know what my thoughts were, but the second half brought the movie around pretty nicely. My recommendation would be to rent the movie prior to a purchase so that you can form your own opinion.

Shout!Factory presents Brainscan with an AVC encoded 1080p transfer in 1.78:1. Until now this film has only been available on fairly dated DVD copies. The new transfer by Shout! looks nice. The film has a similar softness to other low budget entries from the Nineties, but the fine detail of the disc is much better than similar early Nineties films that have come to Blu-ray. I did not notice much in terms of artifacts despite watching the film on my UHD television. Fans of the film will not feel like they were tricked into upgrading when they decide to play Brainscan.

Brainscan has been given a good DTS-HD MA 2.0 stereo track. The film is not incredibly immersive, but the soundtrack is pretty rollicking. The film features music by White Zombie, Primus, Pitchshifter, Tad, KMFDM, Butthole Surfers, and more along with the score by George S. Clinton. The score by George S. Clinton is very typical of that era in that it sounds pretty out of place now. I liked it. The track is solid overall.

Brainscan is an interesting and flawed trip into a nightmarish situation. The film has a lot of redeeming qualities, but it is by no means perfect. I will need to revisit this one in the near future so that I can gather my thoughts better on how well I liked it. For right now, I am somewhere in the middle as to what I think about it. My recommendation would be to rent the film prior to purchasing. For fans of the film, the new Shout!Factory release has some amazing supplements including a great interview with screenwriter Andrew Kevin Walker.