Where the Boys Are (Blu-ray) 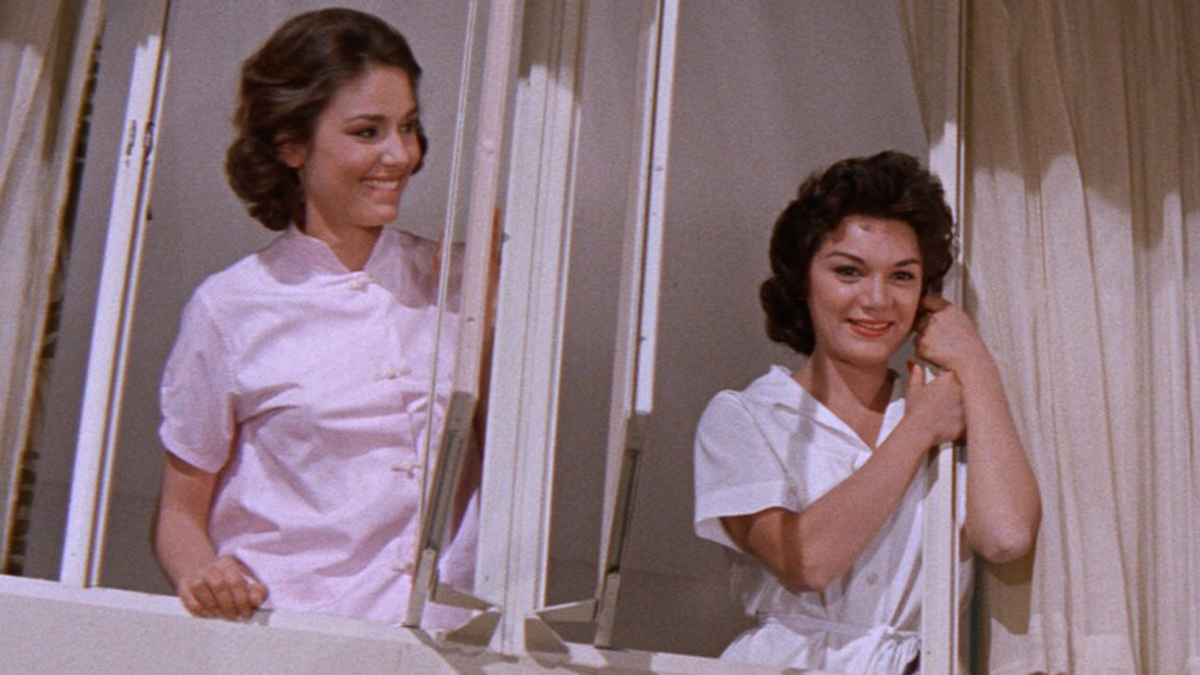 The plot of the film revolves around four co-ed girls: Merritt, Melanie, Tuggle, and Angie, from the freezing cold Penmore University in the Northwest. They decide to go down to Fort Lauderdale for Spring Break. Along the way, each of the four girls struggles to enjoy themselves and meet a romantic interest. Angie (Connie Francis) meets a jazz musician (Frank Gorshin.) Merritt (Dolores Hart) meets a wealthy playboy (George Harrison.) Melanie (Yvette Mimieux) experiences numerous different love interests. Tuggle (Paula Prentiss) falls for a goofy hitchhiker with a proclivity for hats (Jim Hutton.)

Where The Boys Are is more interesting as a time capsule than as a film. I can not say honestly that I enjoyed the movie very much, but I don’t think I was its target audience. The target audience seems to be sexually repressed adolescent girls coming of age in 1960. There is an abundance of innuendo and discussion of sexual morality, but the film is decidedly PG (aside from a dark twist towards the end that felt straight out of an after-school special.) The film is pretty harmless, but I found myself only enjoying it for the time period itself and all the bright colors and styles that came with it. The acting is solid enough, but nothing particularly special. The best aspects of the film are its jazzy score by George Stoll and enjoyable cinematography by Robert J. Bronner. Also, Connie Francis has a pretty great voice.

I was surprised to see that in a Turner Classic Movies poll, this was one of the five movies that was most requested to be brought to DVD. For this reason, I respect Warner’s decision to release it. That said, if I was going to watch a lighthearted comedy from around the same time period, I would much rather rewatch The Wheeler Dealers.

Warner Bros. did a great job on the transfer of the film using an MPEG 4 AVC codec of a new 2K restoration. The film was shot in a fairly wide format so there is constantly plenty on screen – from the beaches of Fort Lauderdale to jazz clubs with women performing in aquariums. The cinematography by Robert Bronner is bright and enjoyable and the costuming and set designs are well thought out. Warner releases continue to shine with great attention to detail and clarity.

Warner Bros. have provided a DTS-HD Master Audio 2.0 track that sounds very good. The front speakers are used for all of the mix, with other speakers used during compositions. For a 2.0 mix, there is a lot to enjoy. The songs by Neil Sedaka and score by George Stoll keep the film vibrant and the soundscape active. With all that going on and the noises of all the crowded spring break places, the mix feels more alive than most 2.0 mixes. I did not detect any notable hiss. This is another job well done from the team at Warner.

Where The Boys Are is pretty harmless, but not exactly up my alley. I feel a little bad for reviewing it because it was so obviously meant for somebody else. I respect Warner’s decision to release a film that was heavily requested from collectors. Fans will be excited to see that the transfer by Warner is excellent, but I highly recommend only checking this one out of this genre of film appeals to you.