Confession: It’s been well over three years since I last attended church. I was born and raised Catholic, but have been only to a few Baptist services. I say a lot “To each their own”, but let’s just say that if I decide to attend church again, it’ll most likely be at a Catholic church. I’ve nothing against Baptists, but they tend to have their own way, yet most denominations do. I tend to stay out of religious and political talk, because I just don’t like to get into it with people. I don’t have a stance on if we’re born gay or not. Honestly, I couldn’t care less, but most people are very strong minded on the subject. I bring all of this up, because Boy Erased touches on these very things. It’s about a teenage boy who is outed and his family, led by a Baptist preacher and his old fashioned mother hope to “Cure” him by sending him to a camp. It features strong performances across the board, with Lucas Hedges in the lead. He really is shaping up to be quite a great actor, and had another solid film, Ben Is Back recently.

We meet Jared Eamons (Lucas Edges), he’s 18 and has a girlfriend, though he eventually ends it with her. His father, Marshal (Russell Crowe) owns a car dealership and is also a Baptist preacher. His mother is played by Nicole Kidman and seems to have wandered straight out of the 1950’s with her hairstyle and wardrobe. When Jared comes out as gay, his father informs him that he and his mother refuse to allow him to live under their roof as a gay man. They hope to “fix” him by sending him to a faith-based program that turns gay men into heterosexuals. This is all led by therapist Victor Sykes (Joel Edgerton, who also directs the film). He tells the group that they were not born gay, but instead blames it on poor parenting. His methods are less than conventional and very extreme, to say the least. Jared realizes that the program might not have an official end point and the drama arises from there. We’re unsure whether he wants it to work or to remain as he is, despite his father’s disapproval.

Boy Erased is a brave and powerful film that doesn’t shy away from things. It never feels overly preachy or heavy-handed, despite the heavy subject matter. I think it works successfully overall, but I didn’t love the film. It’s one I’d give a mild recommendation to, but not a must-see by any means. It contains many powerful scenes, and in some ways those moments make up for the lesser ones. I just wish it moved me more. Performances are all solid across the board, and I especially liked Kidman in the role. That was probably the most challenging role as the love of a mother is often what a young man needs, but she also sticks by her husband at times. I enjoyed a lot of the family dynamics and scenes between Jared and his father. Edgerton gives a strong performance too. All these things and I still wish I enjoyed the film more. I think the pace is almost too leisurely at times. It’s never downright boring, but things could’ve been picked up a bit. There’s a good chunk of deleted material on this disc that also proves this point. With a bit more editing this could’ve been a true winner. As it stands, it’s a good film with several great scenes that just warrants a viewing.

Like the film, we get a good, but not great transfer. The 1.85:1 AVC encoded image has a virtually flaw free print, but the image can seem a tad dark through much of the film. It’s a very subdued, kind of washed out look. Make no mistake, things look good, but I just expected something more. I believe this falls more on how the film was shot than the transfer itself, so my remarks might be on the extreme side. Either way, I felt to comment on it.

This is a dialogue heavy film, so have that expectation in mind. Still, the DTS HD track presents it in a mostly positive manner. There are a good bit of song cuts in the film, and those liven things up and some more tense scenes as well. It’s a pretty straightforward track, but I think it serves the film as it should.

While not quite the sure thing that I was expecting, Boy Erased has more pros than cons that ultimately make it worth viewing. It deals with heavy issues, but surprisingly, never feels preachy. Regardless of your stance on religion and if we’re born gay or not, the film deserves a look. It didn’t change my views by any means, but I enjoyed it. I’d advise a rental before anything else. 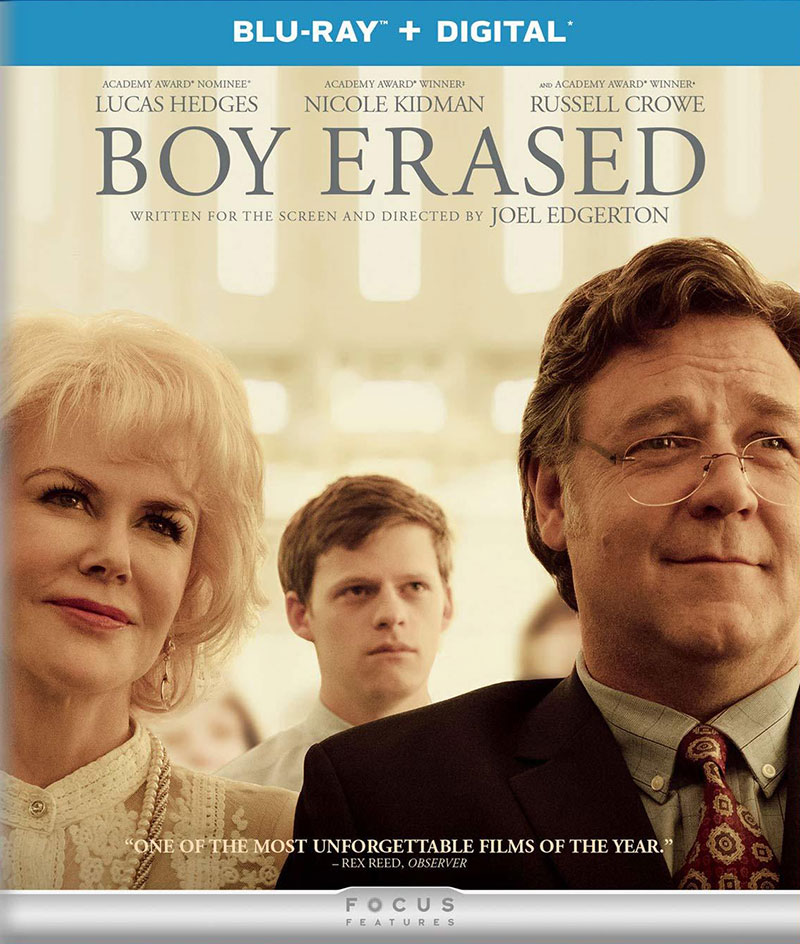