“The Bourne Identity” was a novel by Robert Ludlum, a failed actor, written some twenty five years ago. I vaguely remember the book sitting in the house, my parents had read it, I think. Imagine my surprise when they made a movie starring Matt Damon! I thought to myself – is that based on the novel? Well, loosely it is, though screenwriter Tony Gilroy wasn’t allowed to read the book, only draft the script based upon the outline given to him by Director Doug Liman. Ludlum was a notorious perfectionist, who would often research the locales he wrote about and just about everything about them; much like Tom Clancy is to technology. The real question was this: could a twenty five year old novel work as a movie long after the rest of us had forgotten about it? Evidently the answer was “Yes” as the movie racked up nearly $200 million worldwide and has produced a sequel “The Bourne Supremacy” (the second of the three Bourne books). When it comes to a choice between Matt Damon and Ben Affleck (the two can’t help but be compared), I’ll watch a Matt Damon movie any day of the week. Affleck has chosen the more commercial route and Damon’s movies have always been more to my liking (“Rounders” and “The Legend of Bagger Vance” in particular). So it was with much anticipation that I went into this movie somewhat blind.

Damon plays Jason Bourne, a CIA agent who awakes in the middle of the ocean without any real memory of who he is. He has what is referred to (in the featurettes) as “selective amnesia”, meaning that he doesn’t know who he is, but he retains the skills of his former self (language, combat, etc.). He is rescued by a fisherman with two bullet holes in his back, no less. He also has a capsule in his body that has a Swiss bank account number in it. Managing to find the bank, he sees that he has several identities and some money at his disposal. Paying a local gypsy (Franka Potente from “Run, Lola, Run” fame) to drive him to Paris, the chase is on. The CIA, led by Ted Conklin (Chris Cooper), is on his tail and as we see what skills Jason has, we like him more and more. Bourne is by no means a good guy, he’s a trained killer and it’s only because he’s the lesser of two evils that we tend to root for him. That and he’s played by Matt Damon. There’s the obligatory car chase scene, sex scene and many other more predictable scenes that we’ve become so accustomed to thanks to James Bond movies, we forget that there might actually be a plot somewhere.

“The Bourne Identity” has its greatest strength in the way it underplays itself. Movies pretend to be about something and then don’t deliver and then there’s some that don’t really profess to be about something and we walk away amply satisfied. Go figure. Damon’s expression rarely changes throughout the course of the film and though we’d like to see a character (a main one at that) smile, he’s dealing with memory loss. How many times did Leonard Shelby in “Memento” smile? Right. The movie combines the right elements of a spy movie, action movie and even a few elements of a love story to sustain viewers. I found “The Bourne Identity” a rather good action movie that doesn’t really follow the blueprint for the rest out there. Fans of the genre or fans of Mr. Damon, will most certainly want to check this out.

Since this is simply a repackaging of the earlier edition, this is the same transfer as before. That is not a bad thing, however, as the image is nearly flawless. I don’t have an official count of thetimes this film has been re-released and repackaged. There’s even a dual-sided version out there. This is a single sided disc. Detail is strong and consistent throughout, pores could be spotted on several faces, stray hairs, you name it, it’s all strong and clear. Black levels remained deep and strong throughout. The print has a nice, smooth look to it. No issues here. The image is VC encoded with a 2.35:1 ratio.

The DTS HD track is also worthwhile. Every shot, punch and kick, it’s all strong and clear with no restrictions. The channels were all given plenty of usage with rear channels getting plenty of play. There are all kinds of sounds throughout the film whether it’s glass shattering or tires screeching, but rest assured, this track always delivers full force. Vocals were never an issue either as they came across clear and audible consistently.

This disc comes loaded with features. As mentioned, this is simply a repackaged disc in Universal’s line of steelbooks. There are tons of Picture in picture features as well as Universal’s U-Control features. This release also includes a DVD copy as well as a digital copy code. If you already own the film in one of its many versions then there’s nothing new to be found here outside of the packaging. Let’s take a closer look. 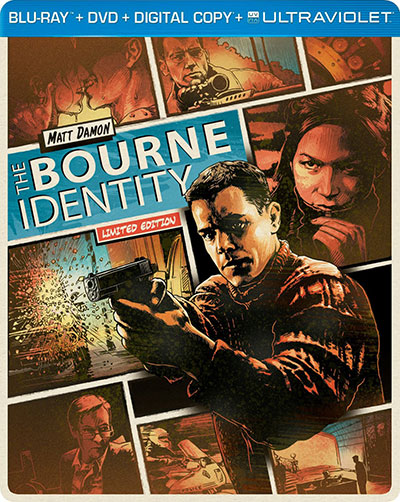