MVD Rewind Collection, the niche film label that is primarily dedicated to nostalgic collector’s editions, focuses its attention on the post Tarantino independent film boom with their release of the Roger Avary produced Boogie Boy. Do you remember in the mid-nineties where anybody remotely connected to Pulp Fiction would have their names on the front of the movie box if they had anything to do with the film? These films would say something like “from the dark minds that brought you Reservoir Dogs” and it would be referring to an associate producer or something along those lines. In Boogie Boy’s case it says “From the writer of Pulp Fiction” referring to Roger Avary who served as an executive producer on the film. The film is written and directed by Craig Hamann and the film has a lot of heart, but it is not without issues.

Jesse (Mark Dacascos) gets out of prison and rides a greyhound into Los Angeles. He is met by his old cell mate Larry (Jaimz Woolvett.) Larry gives Jesse some great news – he has scored him a motorcycle. They ride to Larry’s place where Jessie is introduced to T-Bone, Shonda, Bulldog, and Breeze. Bulldog deals heroin. Shonda (Tracy Lords) is a scream queen. T-Bone (John Hawkes) is a nihilistic video gamer. Larry is addicted to smack. All of them are addicted to drugs. Jesse and Larry may have been romantically involved when they were in prison together.  When the group goes to see a band named Rocket Brutes led by Jerk (Joan Jett,) Jesse gets a chance to play some drums with the band. Meanwhile all of the other roommates get strung out on heroin. Jerk offers Jesse a job if he comes to Detroit. Larry asks for Jesse to help him with a drug deal. Against his better judgment Jesse agrees to help Larry and the other guys on the drug deal. When the deal goes south and people die, Jesse must find a way to keep himself and Larry safe.

The movie starts out with a decent if not entirely original premise and some interesting subtext between the two male lead characters. Unfortunately- the film taps the brakes for an extended sequence in the desert that lasts way too long. That sequence introduces two characters that are quirky and sadly they feel completely unrealistic with motivations that make little sense until much later. In hindsight this sequence isn’t as bad as it felt during my first viewing, but for at least twenty minutes the film does not make much sense to the viewer and feels totally off the rails. How this sequence made it past the screenwriting stage and all the way to the editing stage and was still left intact in the final film is beyond me. Luckily – the film has a satisfying conclusion. Sometimes – less is more. The film could have condensed these scenes and still been just as effective.

The film is basically a good attempt that can’t quite nail what it is aiming for. There are some really good positive things here. Mark Dacascos is great in the movie and tries his damnedest to make the film work. Dacascos recently showed the world just how fantastic he can be on-screen in the excellent John Wick 3: Parabellum. It’s also fun to see a young John Hawkes in the role of T-Bone. He would go on to great roles in Deadwood and Winter’s Bone. The fight scenes in the film coordinated by James Lew (who also plays a small but important role) are actually pretty cool and interesting. Whenever the action in the film breaks out, the film gets going and will grab the viewer. The overall story of the film is a little bit familiar to movie watchers, but it is not a bad arch. The biggest failing of the film comes down to the dialogue. Craig Hamann tries his very best to make the film work but the script’s dialogue never quite lands. It feels like a movie that would have benefitted heavily from a dialogue coach.

At the end of the day, Boogie Boy is not my favorite of the great MVD Rewind Collection releases, but it is a noble attempt by all involved. Despite some engaging performances, the dialogue is stilted and the script meanders for too long hurting the momentum of the film. That said – people looking for a good throwback to the straight-to-video attempts to match Tarantino, this film will scratch that itch.

MVD Rewind have provided a good-looking transfer of the film in 1080p using an MPEG-4 AVC codec that draws on a new 4K director approved transfer of the film. The film is presented in the aspect ratio of 1.78:1 aspect ratio. I thought that this transfer looked nice. Fine detail is pretty good and there is a fine level of grain lending a filmic look to the proceedings. There is some light specking in some scenes, but I can’t imagine anybody complaining about the way this movie looks. Overall, I imagine that fans will be blown away by the care put into this little film.

MVD Rewind has provided an English LPCM 2.0 stereo track. The stereo 2.0 track recreates the original sound design well. The movie uses a lot of grunge style music that will definitely take people back in time. The film is largely dialogue based but the action scenes sounded pretty good to my ears.

Boogie Boy is almost a great movie, but the stilted dialogue and meandering script hamper the film from reaching its full potential. It was great to see early performances by both John Hawkes and Mark Dacascos. I would give the movie a “C minus,” but the supplemental documentary on the making of the film is a solid “A.” Fans are going to be glad to have a collector’s edition with a solid video transfer and an extensive documentary. 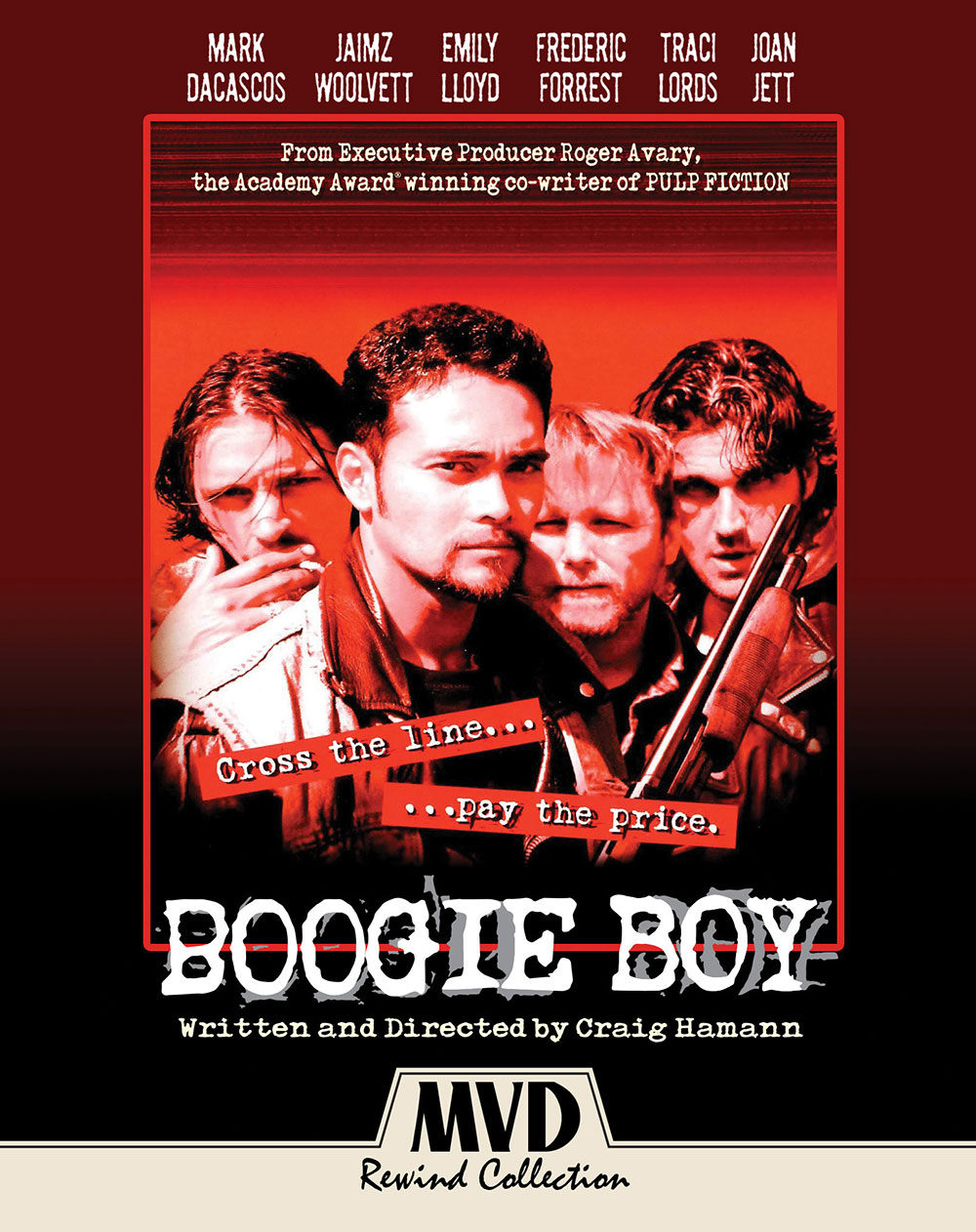