Nearly twenty years ago the world was introduced to a movie – American Pie. The story followed four friends who vowed to lose their virginity on prom night and some of the hijinks that went along with that goal. Flash forward to 2018 and we essentially have the same concept in Blockers. Yes, as much as the world has changed in the two decades since Pie, it would seem that high school students still wish to have sex on their prom night. They grow up so fast, don’t they? Director Kay Cannon, who also wrote the Pitch Perfect trio of films, has taken a new role behind the camera for this one. In the age of helicopter parents, I was curious to see how this one would play out. Then again, I guess everyone was.

We meet a trio of lifelong friends in Julie (Kathryn Newton), Kayla (Geraldine Viswanathan) and Sam (Gideon Adlon) all of whom make a pact to lose their virginity on prom night. Julie’s mother, Lisa (Leslie Mann), finds out about this pact and freaks out. Together with Kayla’s dad, Mitchell (John Cena) and Hunter (Ike Barinholtz), Sam’s father, the trio set out to try and stop them and constantly trying to sabotage the plans of their little angels. That, in a nutshell, is it. Of course along the way the parents manage to flip a car, Mitchell is introduced to “butt chugging” a beer and there are a few things thrown in for added measure.

There’s a lot going on in Blockers, despite the rather simple plot. The kids manage to remain oblivious to the antics of their parents, yet it proves to be oddly entertaining. Especially when we see that the girls’ dates really aren’t bad guys at all. American Pie was a gross out comedy that actually showed it had a heart and it was centered around the four main leads. Blockers tries this, but the focus is on the parents. Perhaps this is American Pie for millennials? Whatever the case, I did find the film enjoyable and laughed out loud on several occasions. If American Pie popularized the term “M.I.L.F.” then Blockers gave us “butt chugging.” I’ll end this review with that.

I’m constantly amazed at the quality of some of these new releases. Having grown up on the VHS and DVD era, seeing a new to Blu-ray (or 4K) movie is so crystal clear, it doesn’t even feel like you’re watching it on television. That said, the video quality on Blockers is second to none. The film takes place over the course of a night (for the most part) and, as such, we’re treated to a lot of nighttime and interior shots. Normally these aren’t that “viewer friendly” but the 2.39:1 AVC HD image handles this with ease. Detail is tack sharp, contrast strong and colors are bold and vibrant. This is typical of a studio movie new to the format. It looks great!

The included DTS HD Master Audio soundtrack is typical of the comedic genre and we’re treated to a few instances that really lit up my system. As mentioned above, there is a car that gets flipped (and later blows up) so that happening was unexpected and really got my attention. The car was actually blown up as referenced in the supplemental material. Vocals are clear, surrounds add some ambiance to some party scenes. It’s a standard mix that delivers the goods, sonically-speaking.

Blockers is an enjoyable film, but it might not be something you want to watch with your 17 year-old daughter just before her prom. The adult cast is rather diverse, each employing a different comedic tactic, but they all manage to work well off one another. Writer/Director Kay Cannon has obviously given the entire cast the freedom to do whatever they want and it shows. Technical merits are just fine, it looks and sounds good and has enough supplemental material to warrant a purchase. 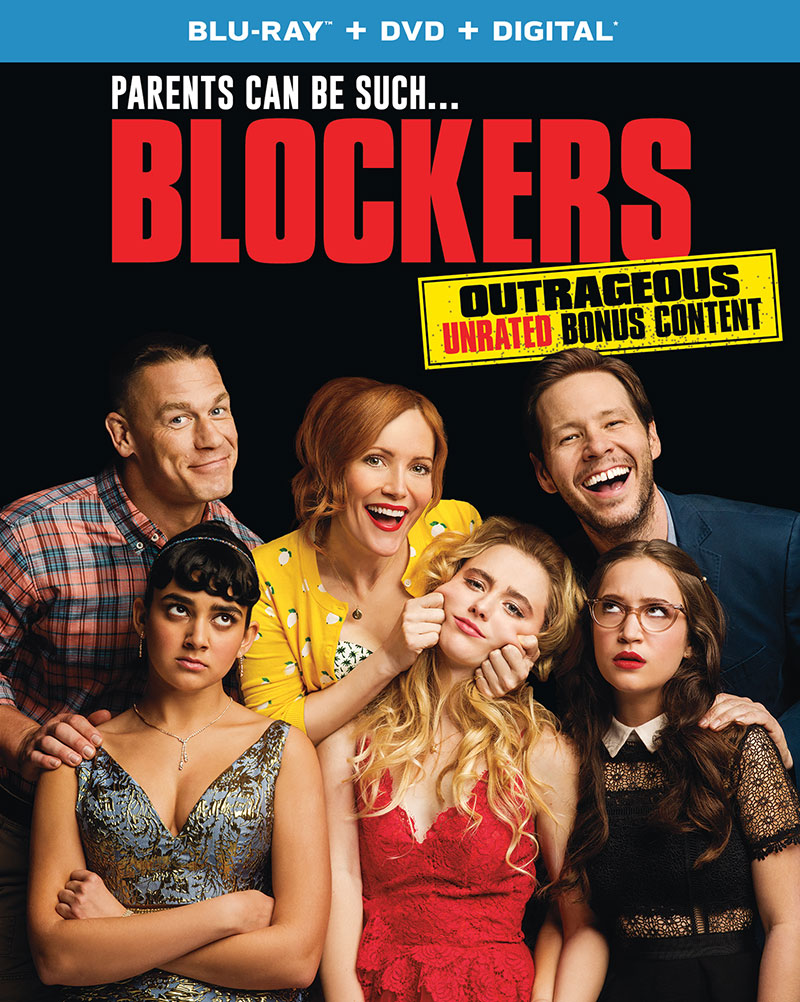