Arrow Video is one of the most interesting film distributors. I have recently extolled the virtues of Arrow Video’s releases, and the reason I originally was turned on to Arrow Video was the release of a box set of Kinji Fukasaku’s Battles Without Honor and Humanity five film collection. When I heard that this year would see the release of not just one box set of Takashi Miike work but two, I was thrilled. Takashi Miike is one of the most interesting and controversial Japanese filmmakers of the last thirty years. I had first been exposed to Takashi Miike through his movie Ichi the Killer which was pretty notorious for all of the blood-letting in the film and then stumbled upon his film Audition. Audition made a fan of me and over the years I have seen numerous Miike films. He is a prolific director with over a hundred credits to his name on IMDB. He recently has hit a pretty great stride with films like Hara-Kiri and 13 Assassins, which were both critically and commercially well received. The three films in the first of the two box sets are not a true trilogy in any sense. They are really just somewhat linked thematically stand-alone films. Therefore, it will be easier to judge on the merits of the individual films in the set.

The first of the three films is Shinjuku Triad Society. This movie is about two brothers, one is a police officer who uses rape to get information out of perps, the other is a lawyer involved with a homosexual triad that is harvesting organs for profit. As the corrupt cop draws in closer on the leader of the gang, Wang, and his subservient gay lover, he also must get his brother to stop his wicked ways.

Okay…. so this movie is definitely interesting, but I found it to just plain be way too much. The film has at least two acts of oral sex and two acts of rape in the film. That said, the other aspects of the film were interesting and I definitely didn’t turn the movie off. I definitely was not expecting the movie to be as over the top as it was. I know that as a fan of Takashi Miike, I should expect him to push the bar way beyond the normal, but it actually took me out of the picture as I watched it. It just felt like too much. While some of Mike’s later promise is on display, I would not recommend checking this movie out unless your comfort level is beyond my own.

The second film in the trilogy is Rainy Dog. Rainy Dog tells a story of a professional hitman named Yuji who makes his living off of killing people in Taiwan for high bidders. His life is interrupted when one of his former flings drops off a boy at his residence and claims that the child is his. On top of that, the boy doesn’t speak. In response, he leaves the boy out in the rain to fend for himself as he continues to take on the occasional hit and bed the occasional prostitute. The boy follows him from place to place as the hitman makes savory dealings. As he begins to develop a bit of a relationship with a prostitute he also decides to have her take care of the boy. Unfortunately, men are now out to kill him so he tries his best to find a safe place for all of them to go.

This movie was enjoyable, but it will feel extremely reminiscent of the movie The Professional and some of the styles the characters exude seem to be stolen from John Woo’s The Killer. That does not make the movie bad at all, but it does lead to the film seeming pretty generic. It is only generic until the last third of the movie which actually is really enjoyable and has some very unexpectedly great twists. One of the other things about the movie I enjoyed was the use of rain in most of the film. I live the way rain looks on-screen and this movie must have been a beast to film with the amount of rain-shots on display. While Shinjuku Triad Society is a much more interesting film, I think I would find myself watching this one again before I would watch the other.

The final film in the trilogy was my favorite in the set. By the time that Miike made Ley Lines he had really developed his own unique and well choreographed visual language. This leads to the third film benefitting from his enhanced abilities.

The story follows two brothers and a friend who live in a small town and have aspirations to get away from everything. They destroy some property of a junkyard owner and split for the big city. In the big city they are immediately taken for their wallets by a down-on-her-luck prostitute. To gain money, they begin to sell a sniffable chemical drug. When the younger brother finds the prostitute, they befriend her. As they make plans for getting out of the big city and out of Japan, they decide to rob one of the big crime bosses in the town.

Ley Lines is an incredibly enjoyable movie. It is easily the best of the three movies, but is just fun to watch. The cinematography of the film is excellent. The movie has some of the Miike excess, but I didn’t find it nearly as objectionable as Shinjuku Triad Society. The pacing is better than the other two films. It has just enough strangeness to almost pass as an art film? Maybe? It doesn’t take itself too seriously and the characters are strange and funny. If you are looking for one film in the set to check out, I would recommend this one.

Arrow Video did a solid job on the transfer of the films using an MPEG 4 AVC codec of a new 2K restoration. The transfers look good overall. The third film fares the best, but anybody expecting these films to look like normal digital film will be disappointed. There is a little bit of softness and some reviewers have noted that possibly there was some “duping” involved. Overall, I really think that Arrow did a good job on these transfers. Instead of thinking you are going to see a Kubrick film, the vibe is closer to Cassavetes.

The audio treatment of Black Society Trilogy was very good. Being a LPCM 2.0 track, it can be expected that range is limited. There is not much directionality, but the film still holds its own as far as depth of sound. The best sounding of the movies is probably Rainy Dog due to the constant rain in the background of the film. Arrow has done their due-diligence and made sure that the audio is very clear and I did not detect any noticeable hiss.

Black Society Trilogy is a very interesting trio of films. To be honest, I was a little bit worried after I watched Shinjuku Triad Society. I just really did not enjoy that movie as much as I had expected. Luckily, Rainy Dog was much better, and Ley Lines is pretty dang great. That said, I would recommend starting with his film Audition and seeing if you like Miike’s style. Miike is not afraid of excess and sometimes that can actually backfire. It also means that his films have tons of material that some will find incredibly objectionable. Consider it a warning and an invitation. For myself, two out of three ain’t bad, and. Am excited that Arrow is bringing his films to the States! 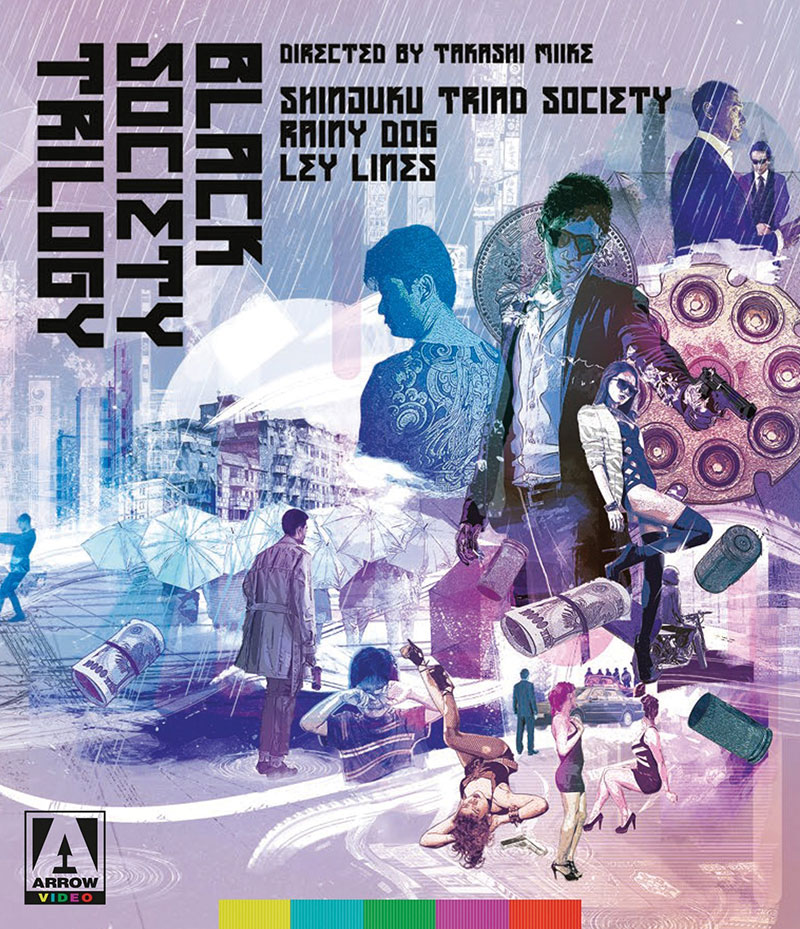