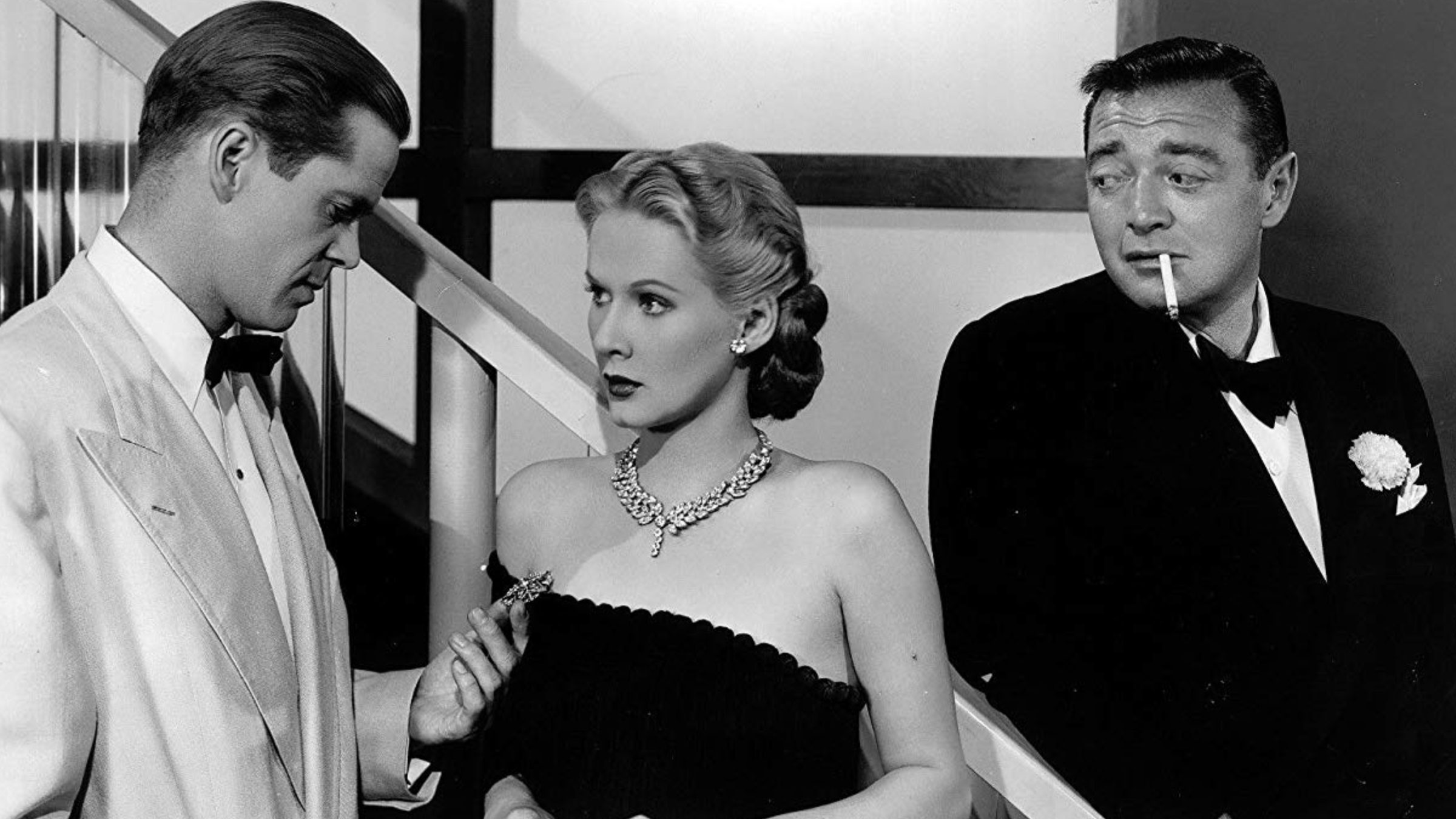 I have been a fan of Arrow Video’s more serious line of films, Arrow Academy, since it began releasing films ranging from Cinema Paradiso to The Big Clock. They have released a good amount of film noir films on this label, and I have devotedly checked them out as they have been released. With the release of Black Angel, viewers are treated to a film adaptation of one of Cornell Woolrich’s more famous novels (of the same name.) I have not read the book, but I have always enjoyed Cornell Woolrich adaptations (my favorite being the excellent Truffaut film Mississippi Mermaid.) I decided to give the film a spin and see how it stacks up in the noir genre.

The plot of the film revolves around the mysterious murder of singer Mavis Marlowe. Mavis was no angel and when she ends up dead Kirk Bennett is sentenced to death for her murder. Kirk’s devoted wife Catherine (June Vincent) devotes herself to proving his innocence. Mavis’s drunk pianist ex-husband Blair (Dan Duryea) had been locked up all night at a flop house the night of her demise. When he meets Catherine, he agrees to help her prove the innocence of Kirk, who had been having an affair with the singer. They begin to seek out clues as to how Mavis met her demise, including searching for a missing brooch. They believe that nightclub owner Marko (Peter Lorre) was involved, so they begin to pose as a singer and pianist duo to try to find out more information. Along the way, Blair begins to fall in love with Catherine.

Black Angel is definitely not a perfect film by any means, but I am a sucker for this type of noir film. With truly imperfect heroes and a fun ending that resolves the case satisfactorily, I found myself happy with the film overall. That said, the actors in the film are not noticeably talented with the exception of Peter Lorre. It ends up not hurting the film too badly – especially since the film only runs eighty-one minutes – but it goes to show how much a charismatic actor like Bogart or Lana Turner can aid a film. While Dan Duryea and June Vincent are certainly not bad, there is a reason they didn’t make it to the A-list. They were employed in smaller roles for the rest of their careers.

Black Angel should whet the appetites of film noir lovers as long as they keep their expectations fairly reserved.

The transfer provided by Arrow Films looks pretty good. Here is what the booklet details:

Black Angel has been exclusively restored by Arrow Films and is presented in its original aspect ratio of 1.37:1 with mono audio.

An original nitrate combined 35mm fine grain positive and dupe negative were scanned in 2K resolution on a Arriscan at NBC Universal.

The film was graded and restored using a combination of these two scanned film elements at Pinewood Studios, London. Picture grading was completed on a DaVinci Resolve and restoration was completed using PFClean software.

The audio was remastered from the restored combined mono track by NBC Universal.

All materials for this restoration were made available by NBC Universal.

The video transfer from the 2K scan looks pretty good. Like other Universal based transfers, the film restoration is not in the same league as a Sony release. That said, gray and black levels are pleasant and fine detail is decent. I have grown to be fairly forgiving on the Universal releases, knowing that it will be the best the film has looked but it will not necessarily compare to a Warner or Sony release.

The LPCM Mono track that Arrow provided sounds good. Dialogue is clear and the score for the film works. This is very dialogue driven but the score comes through nicely during the more dramatic scenes. Range is limited but fans should enjoy the track.

Black Angel is a good (if not great) film noir with an interesting plot based on a popular novel by Cornell Woolrich. The film could have benefitted from more charismatic lead actors, but the film still works because of the interesting storyline. The film looks nice on Blu-ray as long as one does not anticipate the video quality to surpass most of the Universal catalog on Blu-ray. The supplements supplied by Arrow are enjoyable, but they are not incredibly robust. Overall, this is an enjoyable release that I think will scratch the itch if you love film noir.