I’m a proponent of technology. I suppose you can call it a “guy” thing if you like, but then again this is coming from someone who’s run a web site devoted to reviewing movies on disc for nearly two decades. Run on sentence aside, I’m the type of person who will always clamor for the “new and better” gadget. I want something that takes advantage of the new technology. And, while there’s some value in nostalgia, I find it impractical. But that’s me. But using new technology just because it’s there isn’t always the best thing. So when Ang Lee took Ben Fountain’s novel and shot it at 120 frames per second, I read reviews where the movie was literally unwatchable. And, I know what you’re thinking, shooting a film at a high frame rate isn’t exactly a leap forward in technology. Bear with me. Lee also chose to shoot the film in 3D in an effort to pull the viewer more into the action. By using the latest technology, increasing the detail and putting it on a 4K disc – the only parallel I can draw is that this Ultra HD is like Frankenstein.

If you can put aside the way this film looks, and trust me – it’s more difficult than you might think, we do have a discernable plot.

Based on Ben Fountain’s novel, we follow Army Specialist Billy Lynn (Joe Alwyn) as well as members of his squad. Billy was captured on video attempting to save his Staff Sgt. Virgil Breem (Vin Diesel) and as a result, he and his squad have been sent to Dallas on a PR tour. Billy gets a visit from home with sister (Kristen Stewart) who is encouraging him to seek medical discharge. Billy, however, is having nothing to do with that. We then follow the squad as they attend Virgil’s funeral and they’re also the center of attention at the Thanksgiving Day football game. No it’s not actually the Dallas Cowboys, rather it’s a team that we all know is them with a big “D” in place of the star. That said, we’ve got Chris Tucker back to his ’90’s form as a fast-talking producer attempting to sell the rights to this story to Hollywood. And through it all we’ve got the squad trying to cope with this surrealism.

The movie is a bit of a head-scratcher for me. One one hand, it’s not that bad and in the long line of other films of this genre (American Sniper, Jarhead, The Hurt Locker and so on) this might have stood out. But it’s that darn frame rate that really got me. I’m all for taking risks and Ang Lee certainly doesn’t have anything to prove. It’s clear (pardon the pun) what he was trying to do which was to get the viewer more emotionally invested in the film. But when you’ve got someone like me who watches films more for their technical aspects, it’s a very difficult feat to accomplish. I do have to commend Sony for including the 3D version in addition to the 4K version (and Blu-ray), but this is not one that I’ll look at again for quite some time. The performances are good and Lee’s assembled a top notch cast, but this, for me, was a total misfire.

If you’ve not heard of this film, or read my comments above, this is where the rubber meets the road. Director Ang Lee shot this film at 120 frames per second (henceforth referred to as FPS) and it’s presented at 60 FPS on the UHD disc. Compare that with the standard and/or “traditional” 24 FPS and, well, it’s a unique look for a film. If you want some indication of what it looks like, go to Best Buy and check out their demo content on one of the new HDTV’s. It’s referred to as the “soap opera effect” and it annoys the hell out of me. The first thing I do when I get a new TV is disable that or do my absolute best to tone it down. Does it offer a better-looking picture? Technically yes. It “blends” the frames from one to the the other and has this odd ’80’s look and feel to it. I’ve always hated it. Lee also filmed this in 3D, so not only do we have a high frame rate film that’s shot in 3D, but we’re also looking at it in Ultra HD.

In the film’s defense, I will say that if you can put aside the frame rate, it really is a spectacular-looking film. The detail, high dynamic range and everything I normally associate with a good-looking film is present. And again, I see the intent and the look that Ang Lee was going for. But I have to ask myself this: if high frame rate is going to change the way we view movies, why aren’t more filmmakers doing it? Looking at the 3D version, this is even a stranger sensation still (the 3D version is Blu-ray, not 4K). I realize that’s a lot to handle, but then again – so is watching this film. Long story short: it looks amazing, but the way it looks is also distracting, not pulling me further into the film on an emotional level. Your experience may vary.

Shifting gears from the way the movie looks, we find a much more “standard” in the way it sounds. The included Dolby Atmos track is simply amazing in every sense. It envelops you and, to me, does a far better job of bringing the viewer into the film than the 60 FPS presentation does. The opening battle scenes are some of the best I’ve heard in a long time, vocals are crisp and sharp and the LFE get a lot of time to shine. If you don’t have an Atmos setup, the “scaled down” TrueHD mix is nearly as impressive.

The majority of the supplements reside on the Blu-ray disc, but this does have a feature on the UHD disc itself that’s presented in 4K.

The remainder of the supplements, as noted above, are on the Blu-ray disc.

I will say this for Ang Lee, he has crafted a rather, er, memorable film. What could have been yet another movie about soldiers returning home is now a technological experiment. I feel that this was more of a gimmick than anything else, but I do think that there’s potential for high frame rate movies – just not this one. But if you’re not bothered by this sort of thing, then the 4K version is the absolute pinnacle of what a good-looking image is. Caveat Emptor. 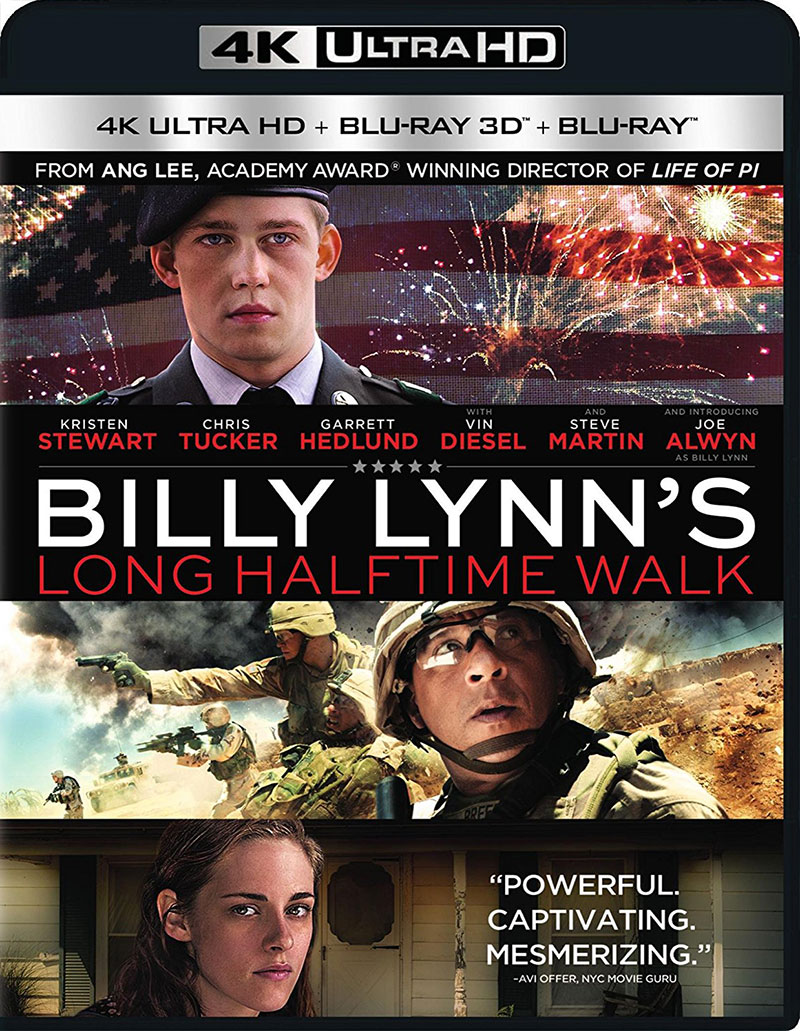