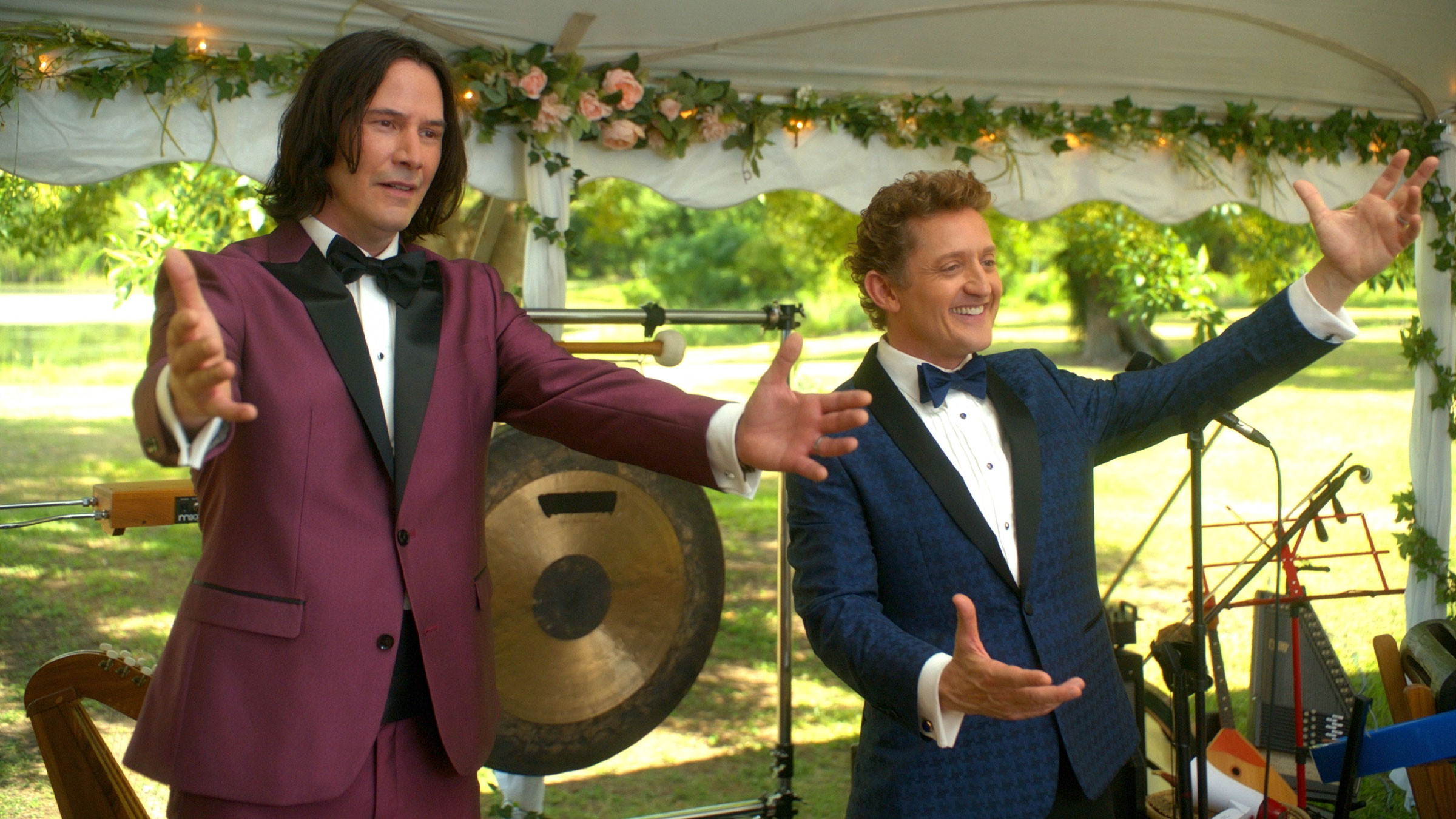 It’s been a while since we’ve seen titular heroes Bill and Ted. A long while. To put things in perspective, the last time we saw them in action was in 1991’s Bill & Ted’s Bogus Journey. I had graduated from high school about six weeks prior and as of this writing, I’m a few years shy of my 50th birthday. So, again, it’s been a while. The original film I’d seen a few years prior and it remains one of my favorites from my teen years. It’s one I can (and have) watch whenever it’s on. The sequel I never really warmed up to. I found it much darker and it seemed to lack the same “magic” (for lack of a better word) that the predecessor possessed. I recently tried to watch it again, the first time since I’d seen in in theaters in 1991, and wasn’t able to finish it. Flash forward nearly three decades and now we’ve got Bill and Ted back at it again. Keanu Reeves has become one of the biggest movie stars in the world and Alex Winter has focused his talents behind the camera. The question is: is the magic back or is this one better left to the early 90’s?

We find Bill S. Preston Esq. (Alex Winter) and Ted “Theodore” Logan (Keanu Reeves) a few decades old, but still playing with their band – Wyld Stallyns. They’ve married the princesses, Elizabeth (Erinn Hayes) and Joanna (Jayma Mays) and each have a daughter. The thing is that Bill and Ted have yet to produce the song that saved the world (in essence, the entire point of the first film). They’re visited by Kelly (Kristen Schaal) who informs them that if they don’t produce the song in a specified amount of time, the world will cease to exist. Knowing this, the duo decide to travel to the future where the song does exist and figure they can just grab it. But due to some “unforeseen difficulties” they make a few more trips meeting some rather unique versions of themselves. Add to that, the daughters have their own time traveling mission. And there’s a robot trying to kill them. Make sense?

Truthfully, it’d take something short of a miracle to top the original. It’s a time stamp from my past and I simply don’t think that no matter how good this film was, it’d make an impression. And it didn’t. To be fair, I liked it better than the sequel (and we do see William Sadler reprise his role as Death).  But there’s just an element missing. It could be that Bill and Ted are no longer teenagers (Reeves and Winter are both in their mid 50’s). So it’s hard to recreate that floppy-haired Keanu who had films like Speed, The Matrix and Point Break ahead of him.  Still, there was a need for this film. I remember seeing an interview with Reeves who said “Bill and Ted wrote a song that was supposed to save the world. They haven’t written the song. They need to.” And, it does make sense. That and I do have to tip my hat to Reeves who had no reason to make this film whatsoever – he’s got all the money he needs, so for him to go back to the franchise that made him famous is pretty amazing. Some will like the movie, others won’t but there’s a small hint of nostalgia there so for that we have to say…excellent!

As I mentioned above probably far more than I should have, both actors have aged since we last saw them. But hey, that happens. That said, the Blu-ray showcases some of their grey hair and wrinkles in the utmost clarity. The 2.39:1 AVC HD encode looks dazzling as do most all new-to-the-format releases. Colors are bright and vivid, detail is excellent (pun fully intended) and contrast is strong. While the film lacks a 4K release, it’s OK. I don’t imagine if there were such a thing, it’d look that much better than what we have. The special effects have, since the first two films, improved and give a newer, more modern take on some of the old antiquated look of the first two films. It’s a good-looking picture that’s sure to please.

The movie is based around music, so with that in mind we do have several segments that really take advantage of the surround sound. The included DTS HD Master Audio mix is strong, has some aggressive tendencies that utilize the rear speakers and everything in between. Vocals are sharp and crisp and, yes, we do even get a “whoa” or two. I had to chuckle. While the front stage takes the burden during most scenes, the LFE do chime in for some added depth. It’s a nice-sounding mix that, again, is sure to please fans.

It won’t (and doesn’t) replace the first installment from 1989, but it’s nice to see Bill and Ted back after a three decade hiatus. To me, it felt a little forced, but for fans of the franchise – it’s worth a watch. It looks and sounds great and has a smattering of extras that might warrant a purchase.