Film Movement is an interesting film distribution label. They release only a small lot of Blu-rays each year and the majority of their viewership comes through subscribers to their film club. I have enjoyed the label’s releases over the last couple years so I was happy to check out their release of Bent, based on the award winning play by Martin Sherman. I had not heard of the play and had no idea what to expect.

In Berlin, during Hitler’s regime, Max (Clive Owen) lives in the sexual freedom available to homosexuals before the war breaks out. Mick Jagger plays a transvestite cabaret singer named Greta at a orgiastic gay club. At the club, Max meets a soldier named Wolf (Game of Thrones’ Nicolai Coster-Waldau) and brings him home to the disapproval of his lover, Rudy (Brian Webber.) Unbeknownst to Max, a man has come to the club to ask who is and who is not homosexual amongst his soldiers that he has in a photograph. Soldiers arrive at Max’s apartment, grab Wolf, and execute him on the spot while Max and Rudy flee in their robes. They make their way to Greta who dresses them in regular clothes. Greta let’s them know that moving forward he will be George – a married Christian man. Max presses George for cash and asks if he named names. George supplies him with some cash. Max approaches his uncle Freddy (Ian McKellen) for ID cards and two tickets to Amsterdam. He fails to make a deal. Max makes his way back to Rudy, who has labored all day. Rudy recalls to Max that he accidentally let one of the workers know that they want to make a way across the border. Soon Max and Rudy are picked up by soldiers and sent by train to Dachau concentration camp. On the train, Rudy is singled out and beaten almost to death for wearing eyeglasses. Max meets Horst (Lothaire Bluteau) who warns him that he can do nothing for his friend. When they bring Rudy back out, they tell Max to hit him. Max beats Rudy to death. Max manages to receive a yellow star versus the pink triangle by proving himself in a manner I won’t mention here. At Dachau, Max begins to fall in love with Horst who wears the pink triangle. Their relationship plays out against the background of the concentration camp.

As can be expected, this film is incredibly heavy. I really had no knowledge of the Nazi purge of homosexuals from their ranks, nor did I know much about the plight of homosexuals during Hitler’s reign. I may have heard about the Pink Triangle at some point, but I had never truly taken a moment to think about it. What this film (and I’m sure the play as well) accomplishes is making the viewer think about this for an extended period of time. This is its greatest accomplishment.

The love story at the center of the film is well-written and as one might expect pretty heartbreaking. Clive Owen is good in the lead role and throws himself into his performance. Lothaire Bluteau also does a solid job. Paul Bettany has a memorable cameo.

The film is based on a play and that should become quite obvious to the viewers by the second half of the film that for the most part is just the two main characters talking with one another. If you do not like films that are based on plays (think closer to American Buffalo than Glengarry Glen Ross,) this film will probably not change your opinion. It definitely impacts the pacing at times and there were moments where the film felt very slow to me. That said, fans of the play will be happy to see that Martin Sherman adapted the play himself into the screenplay.

The film is NC-17 for a scene of sexuality and for some full frontal nudity. To be honest, the scene that garnered the film with the NC-17 seemed inessential to me. I don’t know if that scene was a dig at censorship or if it was meant to emphasize the orgiastic nature of Berlin at the time, but I felt like the scene hurt the film’s ability to be seen by more people. If the film could have been brandished with an R-rating, it could have been seen by far more people.

Overall, this film is a hard watch and not something that I can see myself ever rewatching, but it capably encapsulates the horrors that were inflicted on the gay community during the war. The film is a little slow moving and the exploitative beginning was a little much for me. The film has a strong ending that I appreciated.

Film Movement have provided a brand new 1080p HD transfer that was remastered specifically for this release in 2018 using an MPEG-4 AVC encode. The video transfer is pretty good, but it does not look great. The film has a fairly grainy look with certain scenes looking better than others. Fine detail is decent most of the time and occasionally great. The cinematography in the film is pretty bleak and unlikely to grab the viewer’s eyeballs. That said, the grim look of the film fits the bill pretty well.

The audio is presented in LPCM 2.0. The soundtrack to the film is very pretty – all sad symphonic movements. The dialogue is clear and easy to understand. This film does not have much in the way of action that would utilize the surrounds, so the LPCM track handles everything nicely.

Bent sheds some light on an ugly part of history that is often overlooked. The film features good performances and is pretty well written. It also suffers from a slow pace and contains some unnecessary exploitative material at the beginning of the film. Simply put, the film was hard to watch at times. Like so many plays that are adapted into movies, it feels like a play for a good amount of the running time. Fans of the play should enjoy the film version and I would imagine vice versa. Film Movement have provided a good transfer and the supplements that exist for the film. This is a hard film to recommend, so I would recommend a rental prior to purchase. 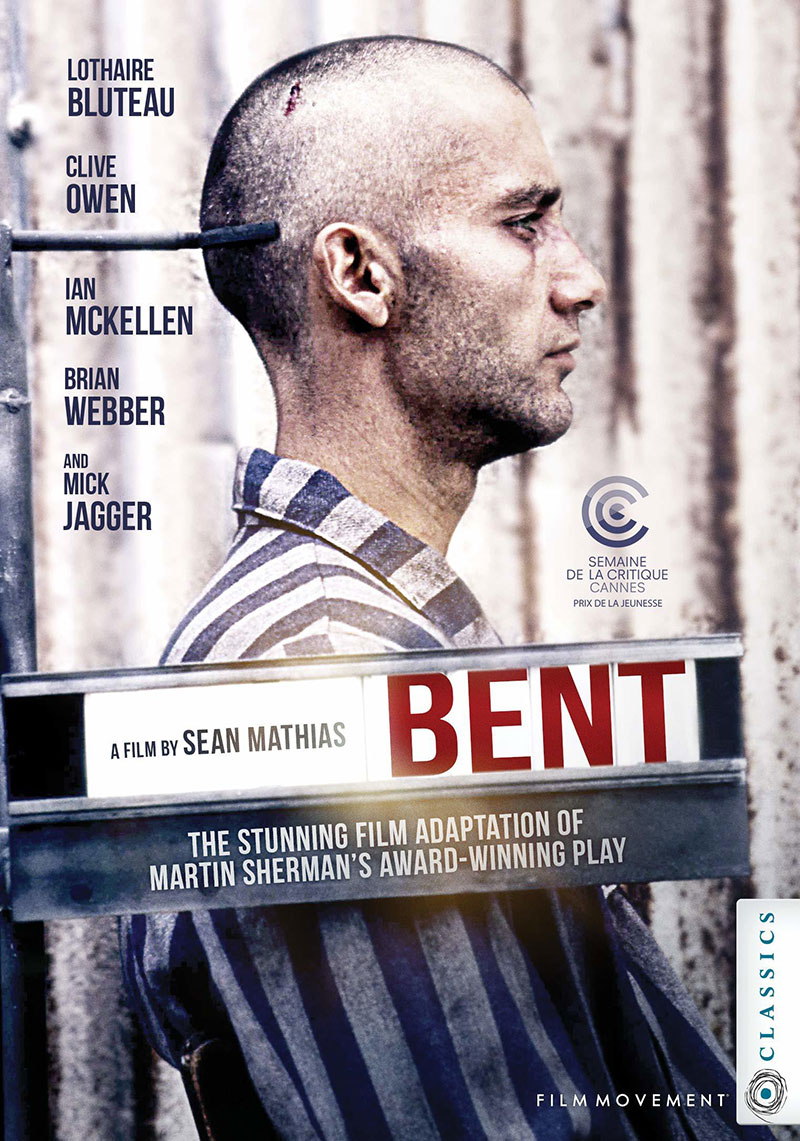