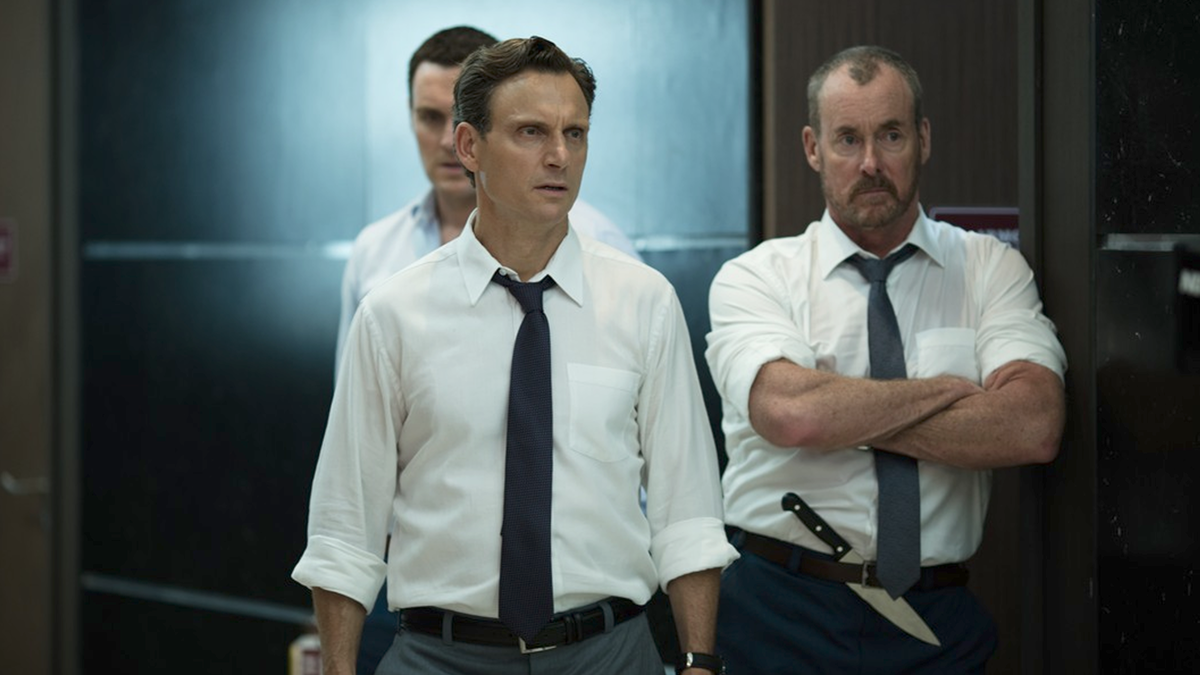 The film draws us into its world rather quickly. We’re introduced early on to several characters as they’re coming to work one day. They work at Belko Industries. This day is a bit unusual as the security is really beefed up and they’re checking all the employees and their vehicles as they enter the parking lot. The building is a bit secluded and away from any major traffic or other such things. Once all the employees are in the building (we’re told there are 80 total), the building is locked up and a voice comes on the intercom. It lets them know that a certain amount of employees must be killed within a timeframe or more will be killed. We’re introduced to several characters, but one of our lead characters is Mike (John Gallagher Jr.). The chief of Belko is Barry (Tony Goldwin) who tries to calm down the employees at first as he scurries to figure out what exactly is going on. We get a couple of early deaths and we and the characters then know that this game is indeed for real. Mike soon realizes that all the employees have been implanted with a chip that will detonate if they try to escape or tinker with it. He even tries to cut his out, but is given a warning over the intercom that he must stop or else he will be killed.

There are far too many characters to list, but there are several interesting ones here. There’s even an amusing subplot where one of them thinks the drinking water has been poisoned. Belko won’t be for everyone, but for those that do get a sinister kick out of this sort of thing, it does deliver the goods. The deaths are what most will want to see, and indeed they are inventive. The characters are actually somewhat resourceful as well and at least try to come up with scenarios for surviving. What’s so interesting to me is none of the employees are really heroes or villains in the traditional sense. We might not agree with some of the decisions they make, but given the situation, we can at least emphasize with them to some extent. It did make me wonder what I’d do in a situation like this (“God Forbid” as my mother would say), but thankfully this is just a film. As I watched it, I did enjoy it then I realized that the very premise means there can only be one person standing. We get to know and care (to some extent) about characters that will most all be dead before the closing credits roll. Thinking a bit further, the film does have some plot holes. The fact that none of these employees would have friends or family not searching for them. How would you explain all their sudden deaths? I also wondered why some of the characters would try to put a banner up on the rooftop when they know that they’re being watched by the building right across from them. These little things didn’t stop me from being entertained, however. The film delivers what it promises and you should know by the premise if the film is for you or not.

We get an AVC encoded 2.40:1 transfer that delivers the goods with gory detail. Indeed the kills come across as gross and this transfer delivers them in an honest fashion. Details are strong and contrast is sharp throughout. The print is also very clean and free of debris or other flaws.

The DTS HD track is also solid. Vocals were clean and crisp, but it’s the action scenes and deaths that’ll be what viewers care for. We get plenty of background noise and a strong range throughout. Things do get loud then quiet rather quickly. So you might want to keep the remote nearby. The music on occasion is also clear as well. This track gives your system a good workout.

Belko won’t be for everyone (admittedly, it isn’t the most pleasant film), but it delivers what it promises. It’s well-paced and makes us care enough about the characters to go along for the ride. I like that it never becomes a message movie that beats us over the head. Some more time with the characters in the first half might’ve helped, but the final film isn’t lacking. Recommended strictly for those who enjoy this sort of thing. All others should steer clear.