When you really think about it, “Being John Malkovich” could really have been called anything and it could have featured any actor. Maybe it’s director Spike Jonze’s weird sense of style that made him choose John Malkovich to focus on. Certainly, it’s one of Malkovich’s better roles in recent years, but don’t overlook the always great John Cusack and Cameron Diaz manages to turn in a pretty decent performance as well. It’s almost so utterly insane to describe the plot that if you were to do it (which I am) someone might think you’ve had “one too many”.

Puppeteer, Craig Schwartz (John Cusack) is out of work. Let’s face it, there isn’t much call for a good puppeteer these days. The only popular ones are sellouts and the rest of the world will have to be content to watch Criag’s plays on the New York street corners. An almost unrecognizable Cameron Diaz plays his wife, who urges him to get a “real job” until his pupeteering career really takes off. Now these aren’t the most normal peopole to begin with. The inside of their apartment looks like a zoo, with monkeys, rabbits, cats and dogs running amok. It’s not until Craig takes a job as a filing clerk that he discovers something that will change him forever! While hunched over at his job (not only to file, but the building he works in is located on the 7 1/2 floor and is hence, half the size of a normal floor) Craig discovers a door that has been sealed shut. With a little work he manages to pry the door open, crawls inside and is sucked into the head of actor John Malkovich! Yes, you read that right. Upon recognition of this, he tells his office partner (who he has a crush on) and they do what anyone else would do…start a business that charges $200 for 15 minutes inside the great John Malkovich’s head!

This, though, is half the story. The sexual attraction between Maxine (Catherine Keener) and Lotte (Diaz) is evident, though only when Lotte is inside Malkovich’s head. Eventually it’s Craig who discovers a way to physically control Malkovich, being the literal puppeteer in as many senses of the word. Malkovich (now controlled by Craig) decides to give up acting and use his already famous name to launch a puppeteer career. Of course this is coming from John Malkovich, so the world sits up and takes notice. All the while, Craig now has what he has always wanted: His love interest, Maxine and a successful career as a puppeteer. Everything is going fine, in its own demented way, until Craig’s old boss discovers that he has taken control of Malkovich. You see, Malkovich is the chosen “vessel” for a group of people that have discovered how to live forever by jumping from new vessel to vessel each generation. I won’t give away the ending, and I’m not sure I could even if I tried, but rest assured that Being John Malkovich is one of the strangest, yet enjoyable movies that you’ll ever watch.

It’s been quite a while since I’ve seen this movie and we all know Criterion does some fine work with the titles they put out. Case in point Being John Malkovich looks great and the conversion to Blu-ray has breathed new life into this transfer. The 1.85:1 AVC HD image looks much cleaner than the previous DVD, it’s a much nicer look and feel and detail is much improved. There are some shots that seem to be a bit on the soft side, but it’s nothing to worry about. Flesh tones still look a bit on the muted side, but does it really matter when you’re looking at a room full of John Malkoviches? Right.

I do remember that this movie wasn’t exactly an audio feast, but there were some instances that really left an impact on me. One of those was the sound that “happens” when someone was entering John Malkovich. It’s almost as if the viewer is being enveloped while watching and this DTS HD Master Audio soundtrack has embraced that in all its lossless glory. Dialogue is clear and clean, John Cusack’s neurotic dialogue sounds as pristine as it ever has and Malkovich’s deep, booming voice resonates through the front stage. As with all Criterion releases, both the audio and video were re-mixed under close supervision by the filmmakers.

It’s been so long since I last saw this film, I can’t remember what the supplements were. But it’s a moot point since we’ve got this Criterion edition that features several new exclusives. We start off with “An Intimate Portrait of the Art of Puppeteering” which showcases the art and makes it look so easy that anyone could do it. They can’t. “American Arts and Culture” Presents John Horatio Malkovich “Dance of Despair and Disillusionment” in this mockumentary. “7 1/2 Floor Orientation” shows how this floor between the floors came to existence and the role it plays in the film. “John Malkovich and John Hodgman” we get an interview with Malkovich as he recalls his reaction to the script and working with director Spike Jonze. This is a new featurette recorded in the Fall of 2011. “All Noncombatants Please Clear the Set” in this hour-long documentary we get the feel for what it was like to work on the film. It was done by filmmaker Lance Bangs. We also get a selected scene commentary by Spike Jonze and Michael Gondry in an abridged version of a full-length commentary. There’s also an illustrated booklet featuring a conversation between Jonze and Perkus Tooth (a Pop-Culture critic). 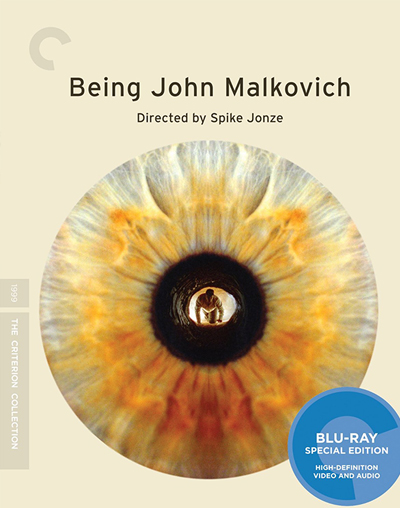