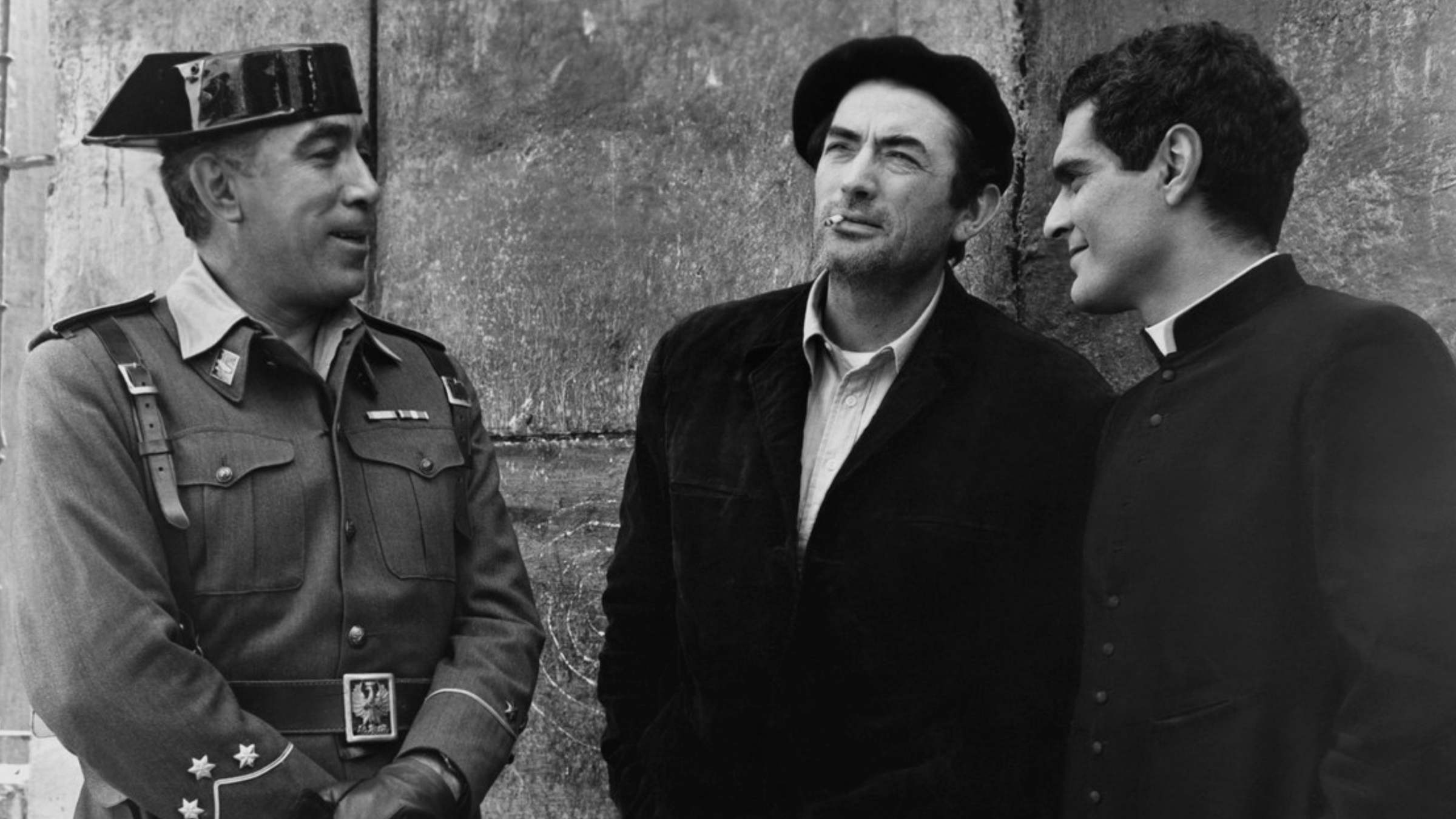 Fred Zinnemann was a fantastic director. His list of credits includes High Noon, From Here to Eternity, The Day of the Jackal, A Man for All Seasons, and many more acclaimed films. Twilight Time has released several of his films on Blu-ray including Julia, The Member of the Wedding, and Behold A Pale Horse. I recently had watched and enjoyed Arrow Video’s release of The Day of the Jackal, so it was pleased by the news that I would get a chance to see his moralistic international thriller Behold a Pale Horse.

The film begins at the end of the Spanish Civil War. The guerrillas have been exiled from the country. They are forced to walk through the mountains into France. One of the leaders of the exiled men, Manuel Artiguez (Gregory Peck) wants to turn around and keep fighting, but it is impossible. Twenty years later, a young man named Paco Dages seeks passage to France to find Manuel Artiguez. Paco’s father had been killed by Captain Vinolas (Anthony Quinn) for refusing to turn on Artiguez. Paco seeks out Artiguez with the hope of having Manuel avenge his father’s death. Artiguez has continued to perform raids on Spain as a bandit and is a folk hero for giving away the riches he receives. Artiguez brushes Paco off at first but soon Paco manages to befriend Artiguez, who is a devout atheist. In Spain, when Manuel’s mother becomes ill she knows that her son will come to visit her on her death bed. Captain Vinola sees the mother’s sickness as an opportunity to set a trap to kill his old nemesis, and he transfers the woman to a hospital and puts armed guards on a full time watch for Manuel. On her deathbed, she enlists the help of a priest named Francisco (Omar Sharif) who was leaving the next day to vacation in Lourte. She requests that he stop along the way to warn Manuel to not come to her. When Francisco honors the wish of the dying woman, he arrives at Manuel’s apartment and tells Paco that Manuel’s mother has passed away. The rest of the film hinges on this encounter.

Behold a Pale Horse is a bleak and unsentimental film about how war can leave scars that remain forever. Neither Vinola or Artiguez have ever stopped fighting the war despite two decades having passed. The film is a great exploration of the contrasts that exist not just between people but within ourselves. Vinola is a devout Catholic, but he is also an avid adulterer and sadistic in his pursuit of his enemies. Manuel is an atheist and guilty of violent acts against people as harmless as priests. He also lives by a code in which he lives piously and gives away most of the money from his raids. The priest is the only character that seems to have his morals balanced completely. The rest of the film explores grey areas.

The acting in the film is superb. Gregory Peck delivers a fiery performance as Manuel. He is fantastic in the role and it is a very different character from anything I have seen him in. Anthony Quinn demonstrates once again why he was one of the best character actors of his generation. Omar Sharif is heartbreakingly real as the troubled priest. Even the child actor that played Paco was absolutely fantastic. There is not an off performance in the lot.

Like The Day of the Jackal, this is a thinking man’s thriller and there is not a lot of the action until the finale. This film finds Zinnemann exploring the long lasting effects of strife. He does a superb job handling the material. The script by J.P. Miller adapts a novel by Emeric Pressburger and there doesn’t seem to be a false note in it. The black and white cinematography by Jean Badal is very striking, but that should come as no surprise considering he did the cinematography of Tati’s masterpiece Playtime. The music by Maurice Jarre is also very well appointed.

Behold a Pale Horse is a great film that is ripe for rediscovery. I am glad that I got the chance to see it.

The new transfer for Behold a Pale Horse is revelatory. The new transfer from Columbia Pictures is up to the high standards that Sony demands and is presented in 1.85:1 aspect ratio with an MPEG-4 AVC encode. Black and white levels are excellent. Fine detail is superb. That said, the film is shot in black and white and some scenes are very dark due to the reliance on natural lighting occasionally. I don’t think anybody will mind this, but it is worth mentioning. I thought the film looked fantastic.

The DTS-HD MA 1.0 mono track is louder and more robust at times than one might expect. The finale of the film in particular stands out. This track is more than capable of delivering Maurice Jarred’s enjoyable score. Some slight hiss enters occasionally, but there is nothing really notable to mention.

Behold a Pale Horse is a great movie that deserves to be rediscovered. While the content of the film can only be described as bleak, it is a tightly scripted, well acted, beautifully shot film that will make you think about it long after the credits roll. The brand new transfer that Twilight Time has provided courtesy of Columbia/Sony looks great. I highly recommend checking out this film if you like a good serious drama and thriller