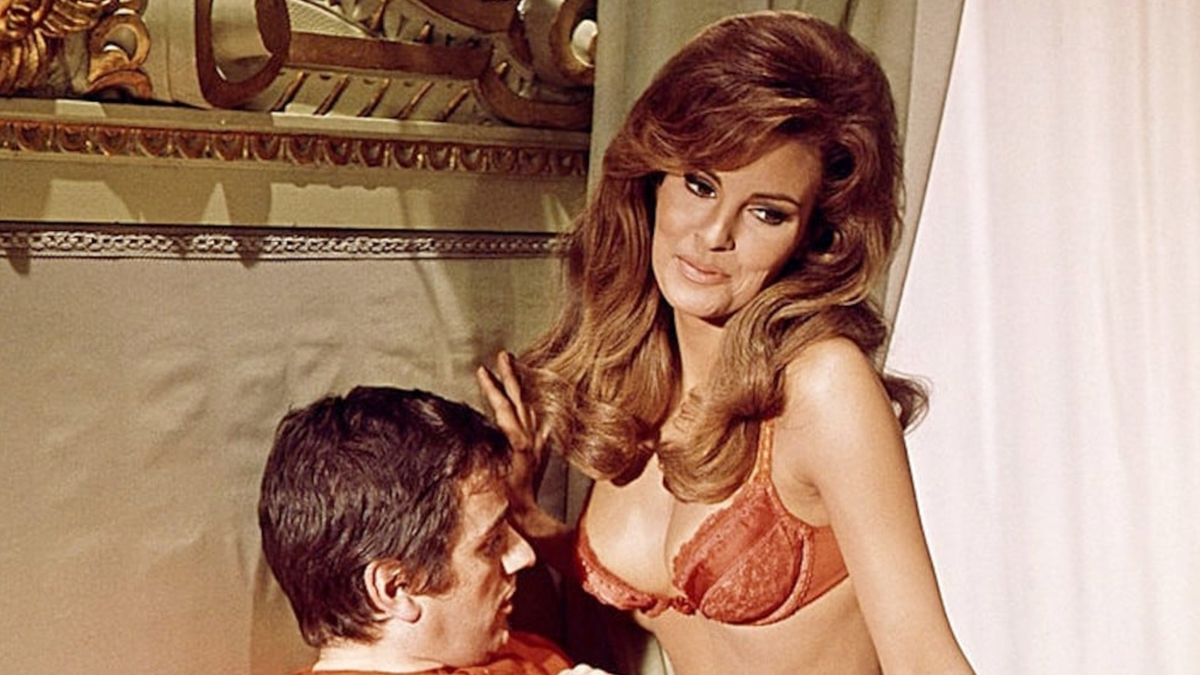 1967 was a landmark year for director Stanley Donen. That year he directed the fantastic Two For The Road starring Albert Finley and Audrey Hepburn. He also directed an excellent British comedy namedBedazzled which starred Peter Cook and Dudley Moore. There are very few directors who have the chance to release two of their best films in a single year, but Donen really had an exceptional track record that year. Cook and Moore were best known for their work together on a British comedy television show called Beyond the Fringe. They were well known in Britain but Bedazzled helped them to achieve fame in the States. Cook and Moore came up with the concept for the film, Peter Cook wrote the script, and Dudley Moore composed the music for the film – proving he was a triple threat! I had seen the Harold Ramis remake of the film (starring Brendan Turner and Elizabeth Hurley) years ago and was happy to sit down and watch the original.

Dudley Moore plays Stanley Moon – a shy short order cook who does not have the courage to speak to Margaret (Eleanor Bron) the waitress who works with him. When he sees her take off in a car with another guy, he decides to kill himself. When he fails in a comedic fashion, a gentleman (Peter Cook) walks into his apartment, introduces himself, and offers to give him what he wants. After a few moments he mentions that he is in fact the Devil, the horned one, the prince of darkness, Beelzebub. He owns a club in London called the Rendezvous. The Devil has a couple staff members at the club- the seven sins including Anger, Sloth, Envy, and Lust (played by the voluptuous Racquel Welch.) The devil offers Stanley seven wishes in exchange for his everlasting soul. The wishes can be canceled at anytime if he should be unhappy with how his wishes turn out. Stanley accepts the deal with his hopes set on winning over Margaret. What Stanley can not plan on is how difficult it is to win Margaret over even when he can approach her as an intellectual, a multi millionaire, as a pop star, and numerous other types of people. The film uses the premise to satirize all sorts.

This film works because Peter Cook and Dudley Moore play off each other exceptionally well. The writing is very sharp and fast on its feet, adapting the Faustian legend for comedic purposes. The dialogue in the film is pretty exceptional. It’s tongue in cheek but I never felt like it became blasphemous. I have always felt that people underestimate God’s sense of humor, and I think he would be compelled to laugh at the film.

Peter Cook is very funny as the Devil. He plays the character as a sort of compulsive anarchist. He can not help himself but tell lies, make people drop groceries, make wasps sting hippies on a picnic, remove signs that say wet paint, and other acts that inspire chaos. It is a hilarious take on the Devil and makes the film very fun to watch. Dudley Moore is great as the beleaguered Stanley. Throughout the course of the film he plays numerous iterations of Stanley and all of them hit the mark. He is really good in the role and the film works by being silly but not so over the top that the premises get tired.

Stanley Donen directs the film with a good eye for letting his lead’s chemistry come through. He gets solid performances from the cast and uses the great cameraman Austin Dempster (that he also used for Two for the Road) to great effect. London looks great when shot by Donen and Dempster. Donen had died just before this film was released by Twilight Time which made the film feel even more special in his recent absence.

Overall, Bedazzled is a unique and memorable comedy that should bring a smile to anybody who watches it. A really funny film.

20th Century Fox provided Twilight Time with a beautiful transfer of the film in 2.35:1 aspect ratio with an MPEG-4 AVC encoded image. This film has some great looking cinematography. It was filmed in Panavision by Austin Dempster who had served as camera operator on Two For The Road. While Bedazzled can not rival that film stylistically, it still does a great job of filming London. The transfer has excellent clarity and color reproduction. I did not see any signs of DNR and the print seems to be in great shape.

Twilight Time have provided both a DTS-HD 2.0 and a DTS-HD Mono track. I chose to listen to the stereo recording during viewing and found the sound mix pleasing and even-keeled. Clarity of audio during dialogue was never an issue. I was impressed by how great the compositions by Dudley Moore worked in the film. He had some real talent in that arena!

Bedazzled is a great little comedy. Stanley Donen was an excellent Director and he knew how to handle this material with panache. Peter Cook and Dudley Moore are perfectly matched in the film and the writing by the duo is incredibly clever. This film has been given a beautiful transfer and it looks great on Blu-Ray. The included extras are brief but enjoyable. Fans should upgrade their disks at their earliest convenience.