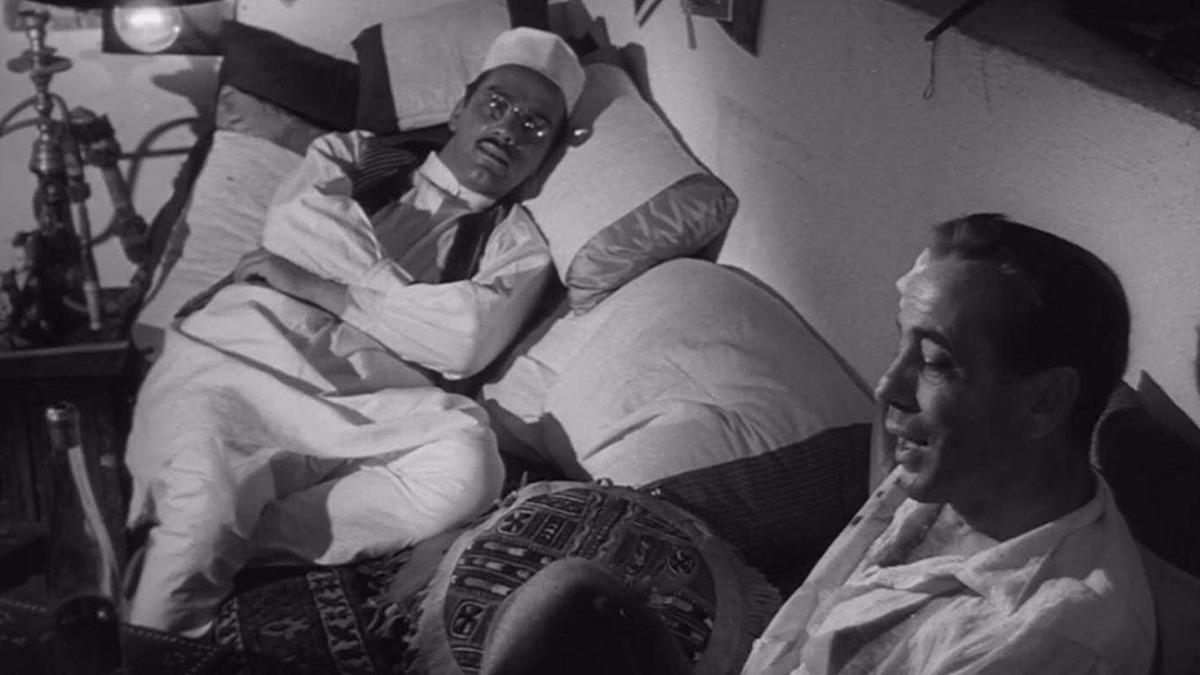 Beat The Devil is a unique release for Twilight Time. This is a new edition of the film from a Sony Pictures and Film Foundation 4K restoration. This new edition does away with the Bogart narration and restores some scenes that had been discarded in all the iterations that came before. In effect, Twilight Time is releasing what can be considered the closest thing to a true director’s cut of the film.

The story of the film takes place in a small town in Italy. Numerous characters are awaiting passage to Africa so that they may stake their claim on some Uranium enriched land. Billy (Humphrey Bogart) and Maria (Gina Lollobrigida) are down to their last dollar. English couple Gwendolyn (Jennifer Jones) and Harry (Edward Underdown) meet Billy and Maria. Very quickly, they begin to have affairs with their opposite counterparts. Meanwhile, there are numerous strange people in the small town waiting to go to Africa. Character actors Peter Lorre, Robert Morley, and Igor Barnard round out the cast. I would talk about the plot more, but it does not seem to be the primary focus of the film, as I will discuss below.

The film has been a cult favorite for many years. You could find this film in many forms including in DVD and VHS buckets for a dollar since the formats have existed. I remember seeing this in a small paper slip at the Dollar Tree off and on for years. The film was not a commercial success when it was released, but in retrospect the film probably just failed to register with audiences that had been pampered with some of the greatest screenwriting of any era. The film was basically made without a finished screenplay. It was based on a novel by Claude Cockburn. Truman Capote was brought on to assist and wrote lines for John Huston’s cast of actors as the film was being made. The result is something strange and in many ways wonderful. The film has a feeling of great friends getting together and having a fun time over a few (or more than a few?) drinks.

Part of the reason it feels so lighthearted is that the plot doesn’t seem to interfere very much with the film. The movie would rather give the actors numerous excuses to speak lines of dialogue from Capote and let the movie coast on star power. The film has two other things going for it. It is directed by the great John Huston and shot by legendary cinematographer Oswald Morris in beautiful black and white. The cinematography in this film is just plain gorgeous. There is a crane scene over the Italian village overlooking the Mediterranean that is as beautiful a scenes as I can recall from that time period. It really is stunning.

This new edition of the film looks great and feels like what they intended to make. The film will never be a serious film, but it does not stop it from being a lot of fun to sit back and enjoy. If you can let the film wash over you without trying to think too hard about the mechanics of the plot, it will give you a great reason to sit around and enjoy the company of some of the greatest actors of the golden age. Bogart looks like he was having a great time. It is hard to not let the film have the same effect on the viewer.

The new 4K restoration by Sony Pictures and Film Foundation (performed in 2016) is revelatory. Presented in 1080p in 1.37:1, the film looks drop dead gorgeous. It was restored from the original 35mm negative and the 35mm interpositive. Benefitting from the excellent cinematography of Oswald Morris, the film is just plain beautiful. Fine detail is incredible. A very fine subtle grain resides over the film. There will not be any need for improvement in this area in the future.

The new DTS-HD MA 1.0 track sounds great. There is no hiss. Dialogue is clear. It is a mono track so it does not blow the roof off the place, but it sounds really nice. The score by Franco Mannino is pretty standard stuff for that time. A solidly done track that felt reference quality. Sony sets very high quality control standards and they don’t falter here.

Beat The Devil is not a cohesively tight film. That doesn’t stop it from being a joy to watch. With great actors hamming it up, direction by John Huston, an ideal Amalfi coast setting, cinematography by Oswald Morris, and dialogue by Truman Capote – what is there to dislike? Twilight Time have provided some excellent supplements and the new 4K transfer and restoration is something to behold. Fans should purchase immediately and newcomers will want to know that this is the version to seek out. Highly recommended.