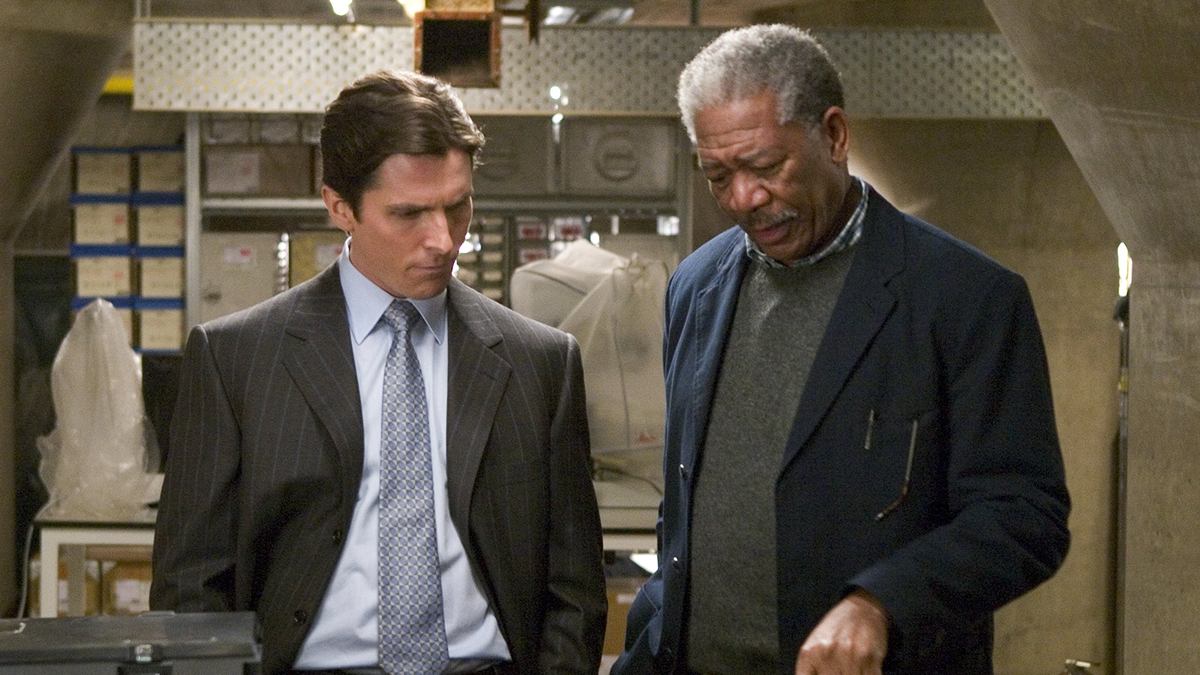 Watching Batman Begins really made me rediscover what it’s like to see movies based on comic books are all about – dark and scary and fun. Of the recent films that have been made from comics, only a few have stood out to me as being truly good and entertaining. I can’t get enough of the X-Men movies, Spider-Man is a bit overrated in my book and until I saw Batman Begins, that was about it. Sure Fantastic Four was interesting, but we’re running out of mainstream heroes to portray on the silver screen. Ok…let’s get back to the basics here: Batman and Superman! Yeah, baby! The DC comics heroes preceded the Marvel Universe (for those that don’t know, there were two major comic book publishers in “the day” DC who had Batman, Superman, Wonder Woman, etc. and Marvel who had Spider-Man, Fantastic Four, Hulk and X-Men among others). Tim Burton’s vision of Batman was one that was, understandably, dark and it was critically and commercially successful when it hit theaters in 1989. I was as surprised as anyone when I heard that they were starting the series over; then again it made sense as Joel Schumacher had made somewhat of a mockery of the franchise with Batman Forever and Batman and Robin though I did enjoy the former namely due to Jim Carrey and Nicole Kidman.

But that was then and this is now.

Director Christopher Nolan, most noted for his direction on Memento and Insomnia has crafted something that I didn’t think possible, a remake that’s a lot more interesting and deep than Tim Burton’s vision. I don’t want to take anything away from the original Batman, because I love it and to see Jack Nicholson ham it up as the Joker is one of life’s little pleasures. To sum it up (for me) Batman Begins seemed to deliver a lot more of the “why” than the “Wow”.

We get a lot more of the history of the Wayne family, the story of their murder is pretty much the same, but we see the motivation of Bruce (Christian Bale) and his hell hath no fury attitude to avenge his parents’ death. We meet Bruce as he’s in a prison camp, only to be released by the mysterious Henri Ducard (Liam Neeson). Ducard offers Bruce training and the means to fight evil through less obvious methods. In somewhat of a “Matrix” setting, Bruce learns the ways of his master, only to rescind at the last minute when he’s asked to kill a man. It’s then that he heads back to Gotham City to get back to his life. His childhood friend is now an Assistant District Attorney (Katie Holmes) and loyal servant Alfred (Michael Caine) is still keeping Wayne Manor running. It’s explained earlier in the movie of Bruce’s fear of bats, and after voyaging into a mysterious cave (below Wayne Manor), he conquers his fear and we all know what he doesn’t – this is literally the bat cave.

Bruce tries to re-connect with his older life but manages to make a mockery of himself by masquerading as a drunken millionaire playboy. This is only a rouse, however, so that he can dedicate his time and efforts into becoming Batman. Morgan Freeman plays Lucius Fox, an employee of the company who has been relegated to working on top secret projects that aren’t ever used. Bruce, though, finds plenty of use for these little toys and anyone who knows “Batman” knows it’s all about the gadgets! Naturally there wouldn’t be much of a movie if there were no super-villain and we meet one of the more unique ones here with the Scarecrow (Cillian Murphy). The Scarecrow is actually Dr. Jonathan Crane, a menacing person who’s employed by Ducard. Their plot is to poison the water supply of Gotham City and have the city wipe itself out – thus “cleansing” the world.

I found Batman Begins to be a superior remake over Tim Burton’s visually stunning version – I liked both, but prefer this one. Christian Bale seems to play the troubled Bruce Wayne a bit better; I get the sense that there’s really something going on behind his persona. There will, no doubt, be endless debate on which is the better movie, but Warner seems to think that this has potential to be another franchise. Highly recommended.

Nolan’s vision of the dark knight is, thankfully, one of the better ones we’ve seen (and would see in future incarnations of this trilogy). This film has seen the light of DVD, HD-DVD, Blu-ray and now makes its debut on the 4K format. As any fan of these films knows, they’re dark – sometimes really dark. The new 4K image simply has nothing wrong with it. There are plenty of opportunities for the picture to be compromised in the shadows and during the first act of the film but thankfully, the image remains clean and consistent throughout. Contrast is vivid and though this isn’t the most colorful film out there, I found the HDR to add a new sense of depth to several of the scenes. It’s not really a surprise, of course, as this is one of Warner’s marquee titles and it’s a thing of beauty to behold in 4K.

The previously-released Dolby TrueHD track from the Blu-ray has been replaced by a DTS HD Master Audio that more than does the job. Batman Begins remains one of the most solid-sounding titles out there and it’s certainly fitting to show off your home theater with. The chase scenes sound amazing, the little nuances here and there really make the track unique. The entire score is rich and robust, particularly when Batman is perched atop a building looking out over Gotham – it’s one of the best examples of surround sound that I can recall. I’ll try to keep my whining to a minimum about Nolan and his disdain for Atmos or DTS X tracks, but suffice it to say that you can’t really go wrong here.

This appears to have the same supplements (all included on the Blu-ray) as the previous version. If, for some reason, you don’t own this disc – it’s got enough to warrant a watch.

There have been several incarnations of Batman prior to this film and there has already been another since this trilogy closed. There will be more. Count on it. However, Christopher Nolan’s vision of the dark knight is one that many regard as the best and this film is the one that started it all. I love this film. The uptick in video and audio quality is enough to warrant a purchase and though the supplements are the same as the Blu-ray, it’s better to have than have not.