Barton Fink (John Turturro) is a writer, one that chooses to focus on the intellectual side of the fence. He lives in New York and writes plays, but it seems as though motion pictures is the hot area for writers, so he decides to take a chance. He is reluctant at first, but soon gives in and heads off to Hollywood, to write for the movie studios. The first project he lands is a low rent wrestling picture, for which he is supposed to churn out a screenplay. That sounds easier than it is, since he doesn’t know much about wrestling in the first place. He has turned a new corner, as he moves from intelligent plays to low budget wrestling pictures. Inside his room at the eerie Hotel Earle, he sits down to crank out the work, but after one sentence, his mind locks up. And whenever he seems to be back on track, some insane event unfolds or he meets some odd person, which causes his brain to once again go on creative leave. His neighbor, insurance salesman Charlie Meadows (John Goodman) tries to help by telling him all about wrestling, but even then, something always comes up to keep Fink from the task at hand. As time passes and the tension mounts, Fink finds himself deeper in the rut, which isn’t helped by a miserable heat wave. Can he break this creative drought, or will this writer’s block remain in place forever?

This movie is almost pure genius, the kind of film that sets up the pieces so well, you never even notice as it happens. But then out of nowhere, it all comes together and you’re left blown away and ready to give it a second look. I have seen Barton Fink and it never becomes tired, if anything it improves over time. Of course, the first time is the best experience, as you don’t know what to expect, but this movie more than stands up to repeated sessions. The tone is dark, but loaded with comic flair and if you pay attention, you’ll notice that the material seems to work on several levels and that’s impressive. You will see small touches you might have missed, or put a couple of things together and draw a new conclusion. Or you can just watch and let the movie entertain you, it depends on what you’re after. The writing is typical of Ethan and Joel Coen, which means smart, well crafted dialogue and interesting situations. I don’t think the verbal banter here is their best work, but it is good and a lot of fun to experience. The cast features some terrific talent also, including Coen regulars like John Turturro, Steve Buscemi, and John Goodman. The performances are superb too, especially Turturro’s effort as the title character.

He seems to pop up in almost all the Coen productions, but he isn’t there just because he’s chums with the filmmakers, not even close. No, John Turturro is in so many of their films because they know he is reliable, as shown time and time again. He is by no means a big draw, but folks know his face and know he is a gifted worker. Turturro has played countless memorable roles in his career, most of which have been smaller characters. He is able to make the most of his smaller roles, making sure the audience remembers him in the end. That isn’t easy to do, especially without snapping the audience out of the film’s tone, but Turturro is consistent in that respect. In Barton Fink, he is bumped up to not only a more substantial role, but the title character himself. He responds with a great performance, one that really showcases his talents, to be sure. I love how he bounces off his costars, especially John Goodman. Other films with Turturro include Fearless, Miller’s Crossing, Do the Right Thing, Rounders, and Mr. Deeds. The cast also includes John Goodman (The Flintstones, One Night at McCool’s), Judy Davis (A Passage to India, Husbands and Wives), Steve Buscemi (Con Air, Living in Oblivion), John Mahoney (Say Anything, Tv’s Frasier), and Michael Lerner (The Mod Squad, Last Man Standing).

Barton Fink arrives courtesy of Kino Video and while the image is superior to the 2003 DVD from Fox, it doesn’t appear that any major restoration work was done. That said, the Blu-ray does allow the visuals to be more effective, since we have a cleaner, sharper presentation than ever before. The colors look as intended, with slightly muted hues, though some shades come across as brighter. No troubles with the contrast, thanks to some smooth and refined black levels. I was simply stunned by how rich the black levels are here, even in the darkest scenes in the picture. On the whole, it appears to be a better overall presentation, but I’d like Criterion to get their hands on this and give it “the treatment.”

The audio here has some highs and lows, but the material is mostly focused on dialogue and low end effects. As such, the included DTS HD Master Audio stereo soundtrack might not be explosive, but it doesn’t need to be in this case. The music is clear and sounds good, while sound effects range from subtle to more active. You won’t be overwhelmed even in the most powerful scenes, but when needed, this track supplies some extra kick. No complaints as far as dialogue either, as vocals sound clean and crisp at all times. Just a good, solid audio presentation, which is all we need in this case, given the material involved.

The previously-released DVD was relatively featureless. Thankfully Kino has some new supplements for this Blu-ray offering.

I’ve said this before and I’ll say it again, the Coens’ films are like Wood Allen’s – there’s likely one or two in there for everyone, fan or not. Barton Fink is one I saw when it first came out and haven’t really touched it since. It’s aged well, as most of their films do and I was enamored at the performances. Kino’s new Blu-ray gives this new life with audio and video as well as a slew of some new supplements. 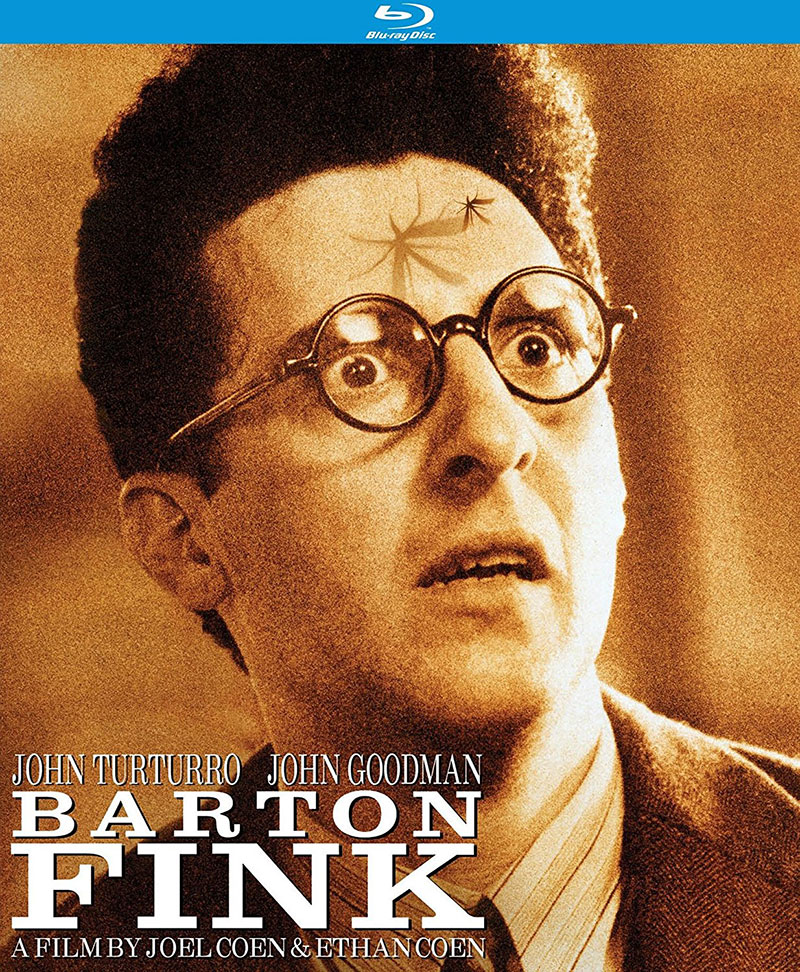