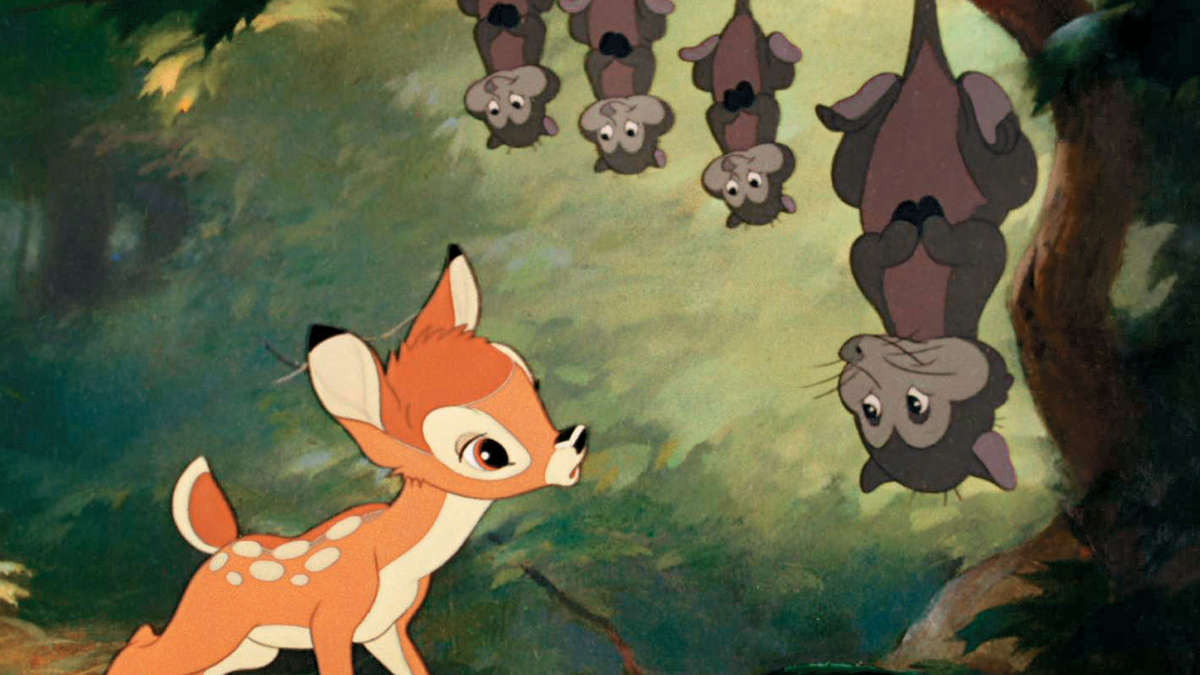 The Disney studio might not have pioneered animation, but they did bring it mainstream. Essentially everyone, from little kids who can barely talk, to those that are old enough to remember seeing them in theaters, knows of at least a few of their classic animated films. Movies like Cinderella, Sleeping Beauty, Snow White and the Seven Dwarves, Pinocchio and of course Bambi. If you’ve never heard of any of those movies, stop reading this review right now and do a search on at least one of them. Bambi, like these other classic Disney tales, is about as timeless a classic as they come. The film was actually one of the ones that featured a death of a major character as well. Kids might not realize it, but we all know what happens in the wild and that “Man” was the true antagonist in the film. I could go on and on, but to justify Disney sending this to me, I’ll give everyone a synopsis of the plot.

We meet Bambi as a doe. His feet are wobbly and we’ve all seen the scene on the ice where he and friend Thumper are having the time of their lives. But it so happens that Bambi’s mother falls victim to a hunter and we watch as he has to grow up alone. He’s got friends in the forest, of course, with Thumper (the rabbit) and Flower (the skunk) and as time passes, we see Bambi grow from a doe into an adult. As we’ll learn later in The Lion King we see that Bambi must now complete the circle of life and become a father of his own. And that’s it. In a nutshell, that’s the plot behind Bambi.

As I said, the movie is one of the jewels in Disney’s crown and with its release on Blu-ray there’s really no better way to experience this film. Disney releases their classic films for a limited time and you’d better snatch this up while you can else it’ll go back in the vault. Like, or unlike, depending on your point of view the animated films of today Bambi plays to both adults and children alike and how can you not shed a tear while watching the cutest doe react when his mother won’t wake up? I sound like a broken record here, but Bambi is about the most essential film you can have in your library. The children will love it and the adults can reflect back to when they first saw the movie.

There appears to be nothing new when it comes to the transfer. Then again, the version that came out in 2012 looked pretty good and Disney knows the importance of this title and has done a top notch job at preserving the print. For a movie of this age, I was very surprised at how crisp and clean everything looked. Granted it’s easier to do with animation, but I’ve seen some not so impressive animated films in the past. Quite simply, this is a pristine image that looks far better than I’d have ever expected. The 1.33:1 AVC HD transfer is shown in a full-frame format, though Disney has included a nifty little feature called “Disney View” which shows some art to fill up those black bars. So we get the appearance of a full widescreen film, though the action is only taking place in the 1.33:1 area. I’m floored. There’s nothing more to say here – it looks amazing.

As with the video, the audio really had nowhere to go. Bambi has been given a remixed soundtrack with a new DTS HD High Resolution mix. While this differs a bit from a true Master Audio mix, the film has again never sounded better. I realize that the score is some seven decades old, but to me the majority of the action seemed to take place in the front channels. Surrounds are present, but not overly active during the movie. The LFE do make their presence known, but not quite as often as I’d have liked (especially during the forest fire sequence). I could nitpick and complain some more, but odds are that you’ll be so blown away by the way this looks, maybe you won’t notice the oddities of the sound.

The remainder of the supplements are ported over from the previous edition and those are listed below (albeit not in bullet point form).

This is one of Disney’s top tier titles and as such it gets the distinction of “Diamond Edition” on the cover. Seeing this means that there will be plenty of supplements and they’ll most likely be more than just fluff. Starting out we see “The Making of ‘Bambi’: A Prince is Born.” This is actually six featurettes rolled into one documentary that encompasses everything from the story to the characters, the actors as well as art design, music and the history of the project. Suffice it to say that everything you need to know about this movie is right here and at nearly an hour, it’s almost as long as the film itself. Moving on we get two deleted scenes “Two Leaves” and “Bambi Stuck on a Reed” and they’re shown in HD. Two other scenes were shown on the previously-released standard DVD edition. We get a peek inside the Disney vault and see some of the original artwork and we even get a look at Walt Disney himself as he shows us the multi-plane camera technique that was used in a few of these early Disney releases. We get a Silly Symphony short as well as the theatrical trailer. Now this is the Blu-ray we’re talking about, so there are some HD exclusives as we get a Picture-in-Picture commentary track with Walt Disney himself and his crew come up with the story for the meeting. We get some archived footage and transcripts of the movie to boot. There are tons of interactive galleries with sketches and art used (and not used) in the film. This Blu-ray is also making use of technology with “Disney Second Screen” in which you can sync up your laptop or iPad to get some exclusive content. You get take a tour of the forest habitat and the aforementioned “Disney View” lets you view the film in pseudo HD mode. Lastly we get a deleted song, “Twitterpated.”

Bambi is a classic and I’m willing to bet that it will always be. It seems that every five years Disney will release a new “anniversary edition” of some sort of one of their classic animated films. Odds are that most true fans have the Diamond Edition (released in 2012) and that’s fine. If, for some reason, you don’t own this movie – this is the version to get. But honestly, the audio and video are the same and save for a few new supplements – it’s really not worth the upgrade.