On May 2, 2008 the world was greeted with Iron Man. Robert Downey, Jr. played the iconic character and breathed new life into what could have been a flop. I was driving to work when I heard the box office reports for the weekend. Audiences loved it and, though they probably had no idea what was in store at the time, the Marvel Cinematic Universe was born. It was followed six weeks later (June 13, 2008) by The Incredible Hulk, a film that had been made by Ang Lee just five years earlier. We would have to wait another two years before the next MCU film, Iron Man 2. And we’d have to wait another year for Captain America: The First Avenger and Thor. Phase One, as it’s called, was capped off with what was then the biggest movie of all-time, The Avengers. That’s your history lesson for today. But, here we are at the end of Phase Three and with eighteen films in the MCU (and more on the way) it’s safe to say that the “little film that could” have had an impact on Hollywood and pop culture in general. Do you have a favorite MCU character? Odds are they’re in this movie. Let’s get started.

There’s not a lot to the plot of this film, in fact it can probably be summed up in one sentence: Thanos (Josh Brolin) is out to gather all of the Infinity Stones so he may use them to destroy the Universe. Only the Avengers can try to stop him. But the joy of the movie, with its varied and diverse cast, is the way in which they carry this out. Nearly every hero is present here with the notable exceptions of Hawkeye and Ant-Man, but they are at least referenced in one line of dialogue. What we get isn’t so much a linear plot, but several “groupings” of different mixes of this large cast. One hand we’ve got Thor (Chris Hemsworth), who is rescued by the Guardians of the Galaxy. We’ve got Doctor Strange (Benedict Cumberbatch) who meets up with Iron Man (Robert Downey, Jr.) and Spider-Man (Tom Holland). Captain America (Chris Evans) and Black Widow (Scarlett Johansson) end up in Wakanda with Black Panther (Chadwick Boseman) and so forth. The rest of the gang is all present as well with a Hulk-challenged Mark Ruffalo trying his best to be green, Falcon (Anthony Mackie) and some of the other supporting players (there’s are literally too many to list here).

Avengers: Infinity War was the penultimate movie that closed out the MCU Phase Three (Ant-Man and the Wasp is the last), so it’s safe to ask the question…what next? Fear not, true believer – I’m sure that the execs at Disney have plenty of ways to continue to get our money! I won’t go into any details about some of the fates of the characters, if you’ve managed to stay unspoiled thus far, I don’t want this review to ruin any of that. But I will say that we do lose more than a few of our heroes. The film ends in typical cliffhanger fashion, but in no way do we feel cheated. Let’s face it, the MCU has kept us wanting and waiting for the last ten years, so why stop now? Avengers: Infinity War maintains the steady pace and quality set by the films thus far and as we look to Phase Four and beyond, I’m sure that trend will continue.

Like some of their recent offerings, Disney’s epic film travels to the far reaches of the universe and back to Earth (and “Knowhere” in between…get it?). This film seems to combine the urban locale of Spider-Man: Homecoming and Doctor Strange, the outer space backdrop of Thor: Ragnarok and Guardians of the Galaxy as well as the African landscape of Black Panther. Suffice it to say that the 2.39:1 HEVC 4K offering is among the best I’ve seen. Every color of the spectrum is referenced here and the CGI is simply flawless. The purple of Thanos, the little details on Spider-Man’s suit and even the shaved “vents” in Thor’s hair are all clearly visible. The HDR gives some of the scenes a particular boost when compared with the Blu-ray. I’ve said this before, but I could go on and on…trust me when I say that this one looks the part.

I feel that if this were released in anything other than Dolby Atmos, we’d have every audiophile up in arms. Yes, imagine that, people complain about the audio mixes on some of Disney’s Atmos offerings – who knew? Still, I found this to be an immersive and robust mix. There are very few movies that I “turn it up”, but this was one of them. Countless battle sequences keep all of your speakers active, while the LFE have their work cut out for them as well. Vocals (and with a cast of nearly 20) they are vast and varied, sound perfectly natural. Directional effects fill the room and create an ambiance that puts you squarely in the action. This is Avengers: Infinity War, folks – expect to be blown away.

All of the extras are on the included Blu-ray disc.

As of this writing, this is the eighteenth MCU movie and it’s safe to say that it’s the biggest of them all. While there are a few notable characters missing, nearly every living character has made the cut here. Disney’s 4K offering pulls no punches, offering up reference-quality audio and video as well as a bevy of supplements. If you have even a passing interest in the Marvel Cinematic Universe, this one belongs on your shelf. 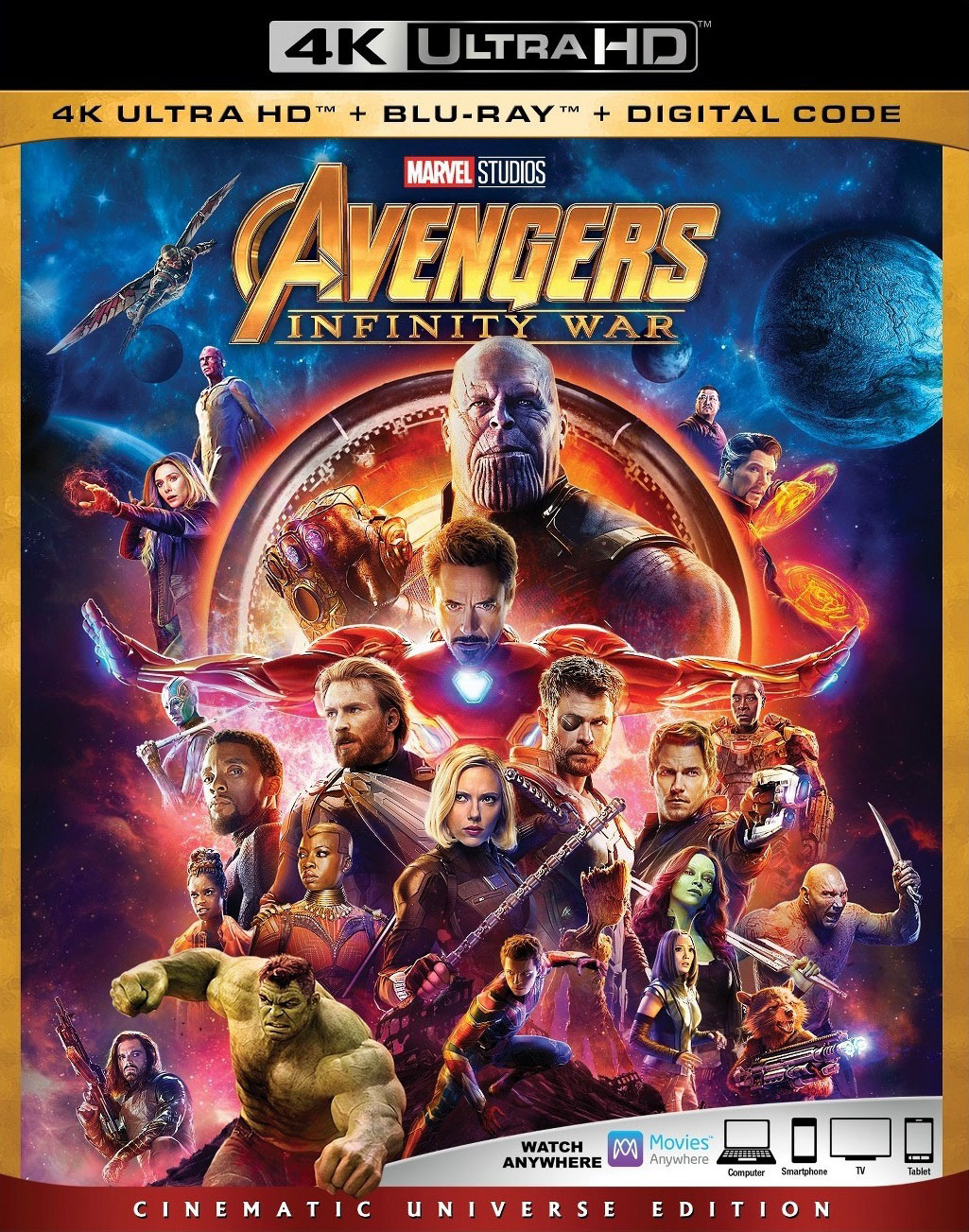